I’m starting to really look forward to Wednesdays, guys. I’ve kept this State of the Weight thing up for 2 months now and the results? They are a showing. 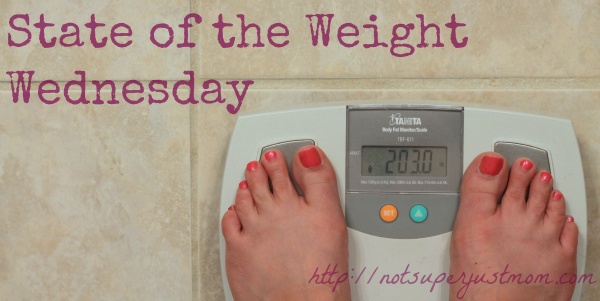 This morning I weigh 203 pounds. This is how much I weighed on the day I found out I was pregnant with Emma.

I cheated and weighed on Saturday and the scale said 203 then, but then I cheated-cheated over the weekend and I was certain I wouldn’t be at 203 when I stepped on the scale this morning and then there it was: 203.

My clothes continue to be too big, at least my shorts/pants do. And even though I don’t think other people can tell I’m losing weight, I can feel the difference in my midsection. I know “they” say that it takes other people three months to notice a difference, and since the only people I see with any sort of frequency are Dan, the kids, and the sitter, I guess I shouldn’t really expect other people to notice.

I notice. That’s what matters. And I’m…shocked by it. Excited? All of the above, actually. That’s what I am.  This is the first time since 2006 that I have been successful with weight loss and I know it’s because I’m not expecting it to happen over night.

I mean, I lost a pound or 5 a time or two, but for the most part, any time I tried to lose weight or get more healthy, it felt like life sabotage me. Or, more accurately, like I let life sabotage me.

Some of my trouble with weight loss in those years was no doubt related to being on birth control and having out of control PCOS. I’m sure of that. But some of it was that I think I wasn’t in the place mentally where I could stick to it. And now I’m in that place.

I kind of like it here. For the first time in my weight loss life, I feel like I have patience with this.

So, let’s talk about the week, shall we? Because it was a rough one, probably one of the roughest I’ve had yet.

Both kids were sick with hand, foot, and mouth disease and Emma had croup. TWO sick kids. Even one sick kid means no going to the gym until after Dan gets home, but two sick kids means that at the end of the day, I’m twice as exhausted as normal because having two sick kids is, well, twice as exhausting.

(Oddly, Emma slept through the night twice while sick. Which was nice for me but also terrifying. The first time your kid sleeps all night long you wake up terrified. Refreshed and terrified.)

HFMD is a nightmare. It hurts them. It itches. It burns. They run fevers. They get blisters. There’s nothing you can do for it except dose with Motrin and hope for the best. Add in the croup cough and suddenly you’re listening for your kid’s labored breathing at 3:00 in the morning.

Not my finest week for fitness. I think I made it to the gym three times. And my plan to work out at home failed again, so I’m abandoning ship on that and just going for it on the machines at the gym.

When I was there on Saturday, the place was deserted, likely because, hello, it was Saturday. Everyone was outside at the pool. Except me. So I know there are times when I can go and use the machines and be still sort of alone.

Gah. I don’t know why this intimidates me so much. But just do it, right? Right.

As for food, I know that I continue to use food as a stress-relieving tactic. And also as a shared interest Dan and I have. The two of us love to cook. We love good food. And good food isn’t always good for our waistlines. We’re splurging on weekends and I’m in this safe zone of still losing while splurging and eventually that’s not going to work anymore.

I want to divest myself of the emotional connection I have to food. I don’t exactly know how to achieve that, but I want to see food as fuel and not comfort.

Personal goal: Use the weight machines at the gym
Weight loss goal: Lose 10 more pounds total for a grand total of 20. (3 pounds to go!)

Dog sweaters were $5 at @lidlus today. This accoun

We did it. We did it for our daughters. And our so

So, we didn't win the election. To be fair, everyo

Joshua is always thinking outside the box/store fo