Welcome back to another State of the Weight Wednesday! I can’t even think of a catchy way to introduce today’s post because LOOK AT THE SCALE! (Not my toes! I didn’t expect today!) 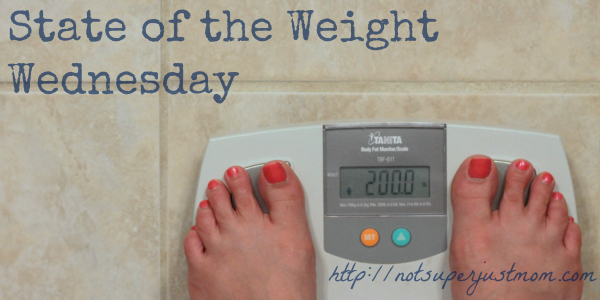 AHHHHHH!!!!! I met Goal #2 this week and OMG! Goal #2 was 20 total pounds lost and I can’t stop kind of smiling about it and doing backflips in my head!

I did not at all expect to lose any weight this week. I actually expected I might gain a pound or a half a pound or so because not only did I eat terribly, I ate terrible for me things.

Last week, start to finish, was maybe one of the worst weeks I’ve had in the past year. I felt emotionally off-kilter from the time I woke up on Monday until Sunday night when I went to sleep. I had a crazy headache that wouldn’t go away and terrible sinus pressure and I started the week exhausted because of the many nights of crappy sleep from HFMD and teething.

I just couldn’t get my bearings. Mentally, physically, emotionally. None of it was coming together. There were some great moments, and even a great day on Thursday, but yeah, the week as a whole kind of sucked. So my food choices sucked, too.

I took the kids to lunch on Saturday and I was halfway through a basket of chips and salsa verde (mmm, salsa verde!) at Moe’s before I even realized I was eating them. At least I’d had the forethought to get a bowl instead of a burrito? I had cereal for dinner two or three nights because Dan worked crazy long hours (probably 80ish hours last week) and cooking for just myself wasn’t something I wanted to do.

I thought that the terrible, terrible quasi-emotional eating and the lack of exercise would have a serious negative impact on my weigh-in, so I was really quite shocked to look at the scale this morning and see a 3 pound drop. I don’t like how I got there because last week was really quite an unhealthy week all around, but I’ll take it and then move forward.

This week is already better, and I’m feeling more like myself again, so that’s definitely good.

I didn’t make it to the weight machines last week, but I only made it to one day of cardio at all. We went swimming and I did yoga, and we walked Ikea, but last week was really light on the exercise for me. Maybe it was what my body needed. Maybe it just needed that break so I could refocus my energies to being well.

I think that’s important, you know? As much as this is about weight loss, it’s really about a healthier life. And that includes all aspects of living.

The number on the scale can go down, but that doesn’t mean much if all of me isn’t healthy. And while I don’t think one bad week is an indicator that my life is a shambles, it can certainly feel that way when you’re in the thick of it, you know?

All I know is that this week was a fresh start with a loss.

What were your successes this week? Setbacks? Link up or leave them in the comments so we can support each other!

I love this "state of the weight" thing. Now to remember to join you each week. I need to do this more now than ever.

What an inspiration you are (and have been) with this!

I am so happy for you, Miranda! I have had a not so good week. Definitely too much junk has passed my lips. I need to get to back to a place of discipline. I'm getting exercise, but not making headway. Going to try to imagine my own version of State of the Weight Wednesday. Thanks for sharing your journey! I truly appreciate it!

Simply? Welcome to onederland (he says, waving from the other side of the fence)

The program comes with full warranty 60 days money back, so everyone can actually try this muscle building system for a few weeks and see the results without any risk at all. Except this is exactly what does happen, frequently in badly considered build muscle strategies. In his new program Kyle Leon offers high quality information and offers a proven muscle building system that has been designed by renowned fitness models from around the world that have been adjusted and tested for a long time in order to provide the best results.