So the title sort of gives it all away, but birth control caused my blood clots. Birth control is the *only* causative factor my doctors could find. 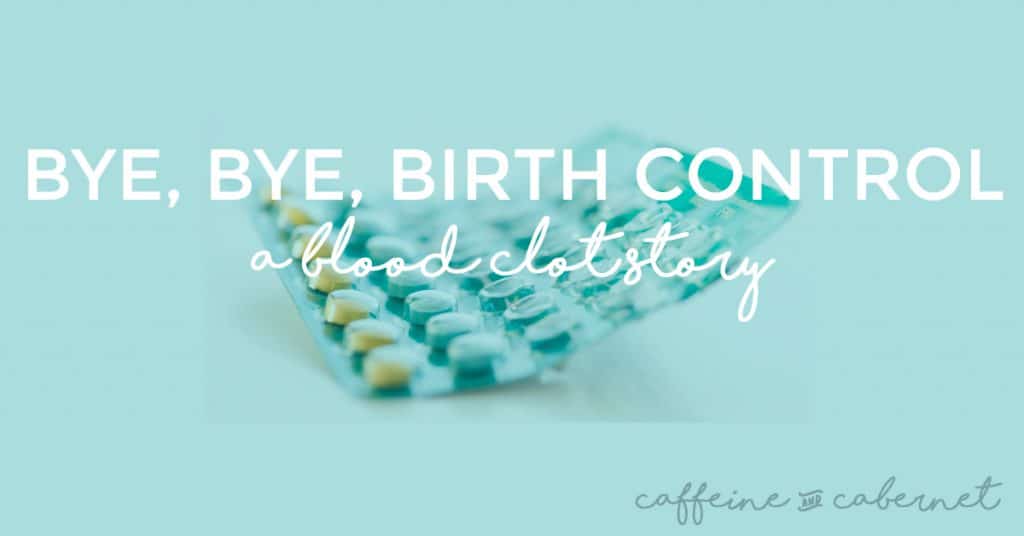 On Monday, I had a follow-up visit with the hematologist. After taking twelve vials of blood at my first visit and sending them off to run myriad tests, we learned that I have no genetic contributors to my blood clots.

No mutations, no clotting disorders. Nothing.

It’s both a relief and not a relief to know this. Actually, I’m not quite sure how I feel.

On the one hand, there’s a reason this happened, but there would’ve been a reason either way. I’m relieved to know that I haven’t passed along any genetic factors which would predispose my children to DVTs.

But y’all, a medication I’ve taken since I was 20 (with the exception of when I was pregnant and nursing) could have killed me.

How did birth control cause this?

Okay, so in full disclosure, I can’t get into the actual HOW of how birth control caused this because I’m not a scientist and I don’t totally understand it all, but I can tell you a little bit about the kind of birth control I was taking.

It was the kind most likely to cause blood clots in women who otherwise have no risk factors.

You probably know it as Yaz, or Yasmin, and if you’ve paid attention over the last decade, you know that Bayer has already been under fire (and in a class action lawsuit) for…dun dun dun…causing blood clots! (Plus heart attacks and stroke! HOORAY!)

Y’all. Let’s just…let’s lay this out.

A pharmaceutical company which had already spent nearly $2 BILLION in legal proceedings in 2015 over their product is still on the market. In fact, it’s on the market under all of these names:

I was taking Loryna. It could have killed me.

Now I stopped taking birth control the day we found the blood clots, on the advice of the vascular specialist who began my treatment. At that time, we didn’t know if I had any genetic factors which could have contributed to this, but one thing we know about women and blood clots is that birth control–namely drospirenone/ethinyl estradiol varieties–put women at greater risk for developing DVT.

Why does this kind of birth control cause DVT?

Ethinyl estradiol is a synthetic estrogen. It works to stop your eggs from hatching out of their cozy home in your ovaries until its time. It also helps regulate your periods.

Drospirenone is a special kind of progestin* which basically helps block androgen and prevent water-weight gain by acting as a light diuretic. (So, in theory, you shouldn’t gain weight on combination birth control pills. In theory.)

By their powers combined, you should see a decrease in acne, weight gain, bloat, cramping, heavy periods, etc. Oh, and you should also be able to avoid pregnancy.

As it turns out, it was drospirenone which had all these magical acne-free, no-weight-gain claims (and Bayer also got slapped for making those claims when Yaz wasn’t approved to treat those issues).

Drospirenone is the primary difference between these pills and other oral contraceptives on the market, so drospirenone is believed to be the culprit in causing DVTs.

I suppose it’s too bad for me that the class action suits are settled so I can’t join it and cash in on my $10 to help offset the over $1000 we’ve already spent to make sure I don’t die. Or the $180 a month medication I’ll be on for at least a year since the clots in my legs sent clots to my lungs.

I mean, sure, yes, I have $2160 laying around for medication. Don’t you? Doesn’t everybody?

So what now? And why does this bother me so much?

I’m basically forbidden by the medical establishment from ever taking synthetic hormones again because even hormones without drospirenone can cause a DVT recurrence. This includes during menopause which better happen a long, long time from now.

No more birth control for me. Ever. Which means we have to find other ways to manage our family planning.

Are we done having kids? Yes. Am I ready to make a permanent decision about that? No.

So we’re sort of stuck in this place where emotionally I’m trying to process how this pretty huge change to our lives has happened. All because of a blood clot I never expected.

I have lots and lots and LOTS to say about how the end of my baby-making days is hurting my heart, but that’s not entirely germane to this discussion. Tangentially related, but also I’ve been feeling it for a long, long time, even longer than I’ve known I could have dropped dead at any moment and actually believed it.

In short, I guess I’m not okay with what I’m dealing with right now, and I think that’s pretty understandable all things considered.

What’s the takeaway about birth control and blood clots?

Let’s be clear. I am not saying “birth control is evil!” and encouraging women everywhere to throw down their pills and run screaming into the hills. I’m not trying to scare you.

The very real fact is that for many women birth control kind of saves their lives by preventing unwanted pregnancies and giving them the freedom to choose when to start a family, and in the vast, huge, decades-long history of oral contraception, this link between birth control and blood clots is pretty new.

Again, I can’t make decisions for anyone else, but you should know that taking a combination pill puts you at a three times greater likelihood of developing blood clots, pulmonary emboli, stroke, heart attacks, and, in some cases, death. (Left untreated, pulmonary emboli can be pretty fast killers.)

We owe it to ourselves to ask questions about the medications we’re being prescribed, and here’s where I didn’t do my diligence.

When I was prescribed Loryna, I had asked my doctor not to prescribe me Yaz or Yazmin because I knew about the risks associated with those medications. I had no idea she was prescribing the exact same medication.

So ask questions. Find out what’s in the medication you’re taking. If you don’t like what you hear, ask for a different medication. No medication will be side-effect free, but we had birth control on the market for literal decades that didn’t cause this.

There are safe birth controls out there, but there are also decidedly less safe pills out there too.

Not all birth control pills are bad, and your risks are still relatively small, but know your risks and demand better care.

And, as this entire saga intends to remind you, listen to your body. Always.

*Here’s a PubMed abstract with fancy words for what drospirenone is and does.

I had the same experience taking Ocella (Also a form of Yaz). My doctor mislead me and completely brushed off my questions about blood clots and other side effects because I was a "completely healthy young adult". I had so many blood clots in my right arm (all the way from my neck to my fingers) that my arm painfully started to swell and I had to go to the ER where they emitted me and checked my vitals every hour to make sure they didn't travel to my lungs. The clots had made their way to a very main artery in my neck. They put me on an equally dangerous blood thinner (irreversible if I got in an accident) that made me scared to drive and basically leave my house. I had to go through all of the testing you talked about and again they found no genetic disorders or mutations. I also had procedures done in the hospital, numerous ultrasounds and ER visits to see if the clots were dissolving. It completely disrupted my life. I seriously urge all women taking this to find some other form of birth control. Blood clots are no joke. I am now seeing if I can be compensated for all the time, money, and emotional damages done from this drug.

HI! I googled some questions I had and found your post. I know this is from last year but I JUST found out I had a LONG blood clot from my calf to my upper thigh about 2 feet long a few days ago! I too was taking Loryna! Thankfully I have not experienced any shortness of breath or anything to that extent but I do still have leg pain. They sent me home on blood thinners and I can't wait to address my list of questions to the Hematologist next Friday. Thank you so much for your post. I will no longer ever be taking birth control pills. You have me wondering about menopause medication later on in life as well. Any extra info you've obtained would be greatly appreciated! Are you still on any treatment medication? I'm going to see if you have posted anything else regarding this issue. Thank you so much

Miranda! I am just now reading about this and wish you a complete recovery! So sorry you had to go through this.

Wishing you a continued recovery and now I'm off to contact my daughters to find out what type of pills they are on. (And for those of you wondering why I don't know, my daughters are grown and live on their own)

Miranda! {{{{hugs}}}} And all my best wishes for your recovery and life going forward. May you find the answer to all your questions. Thanks for calling your readers to attention on this topic.