I am not only the proud owner of blood clot in my leg. I also have pulmonary embolism. In layman’s terms, that means I also have blood clots in my lungs. Someone blast the confetti cannon.

I can’t even bury this lede because YOU GUYS BLOOD CLOTS IN MY LUNGS. 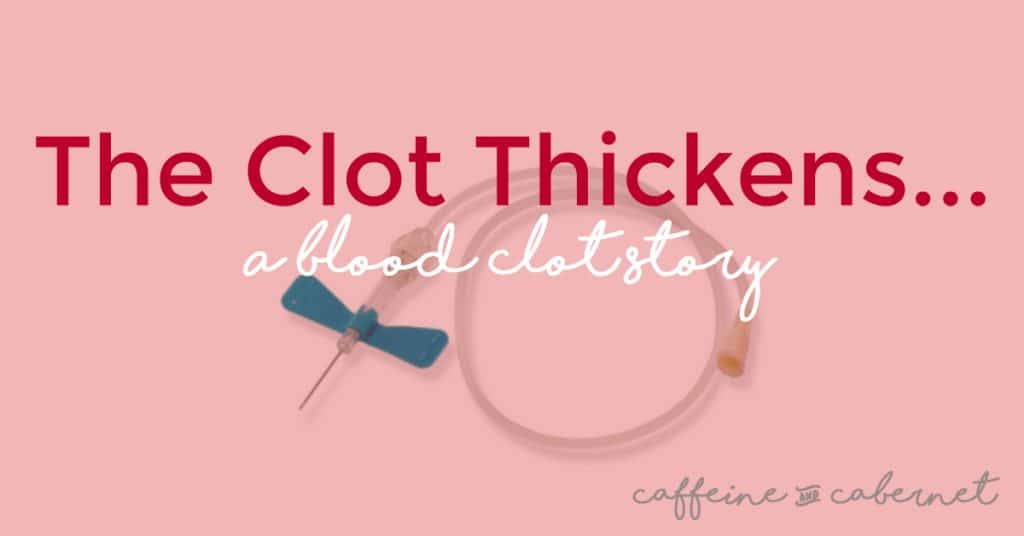 Okay, so the clot is actually pretty thin because Eliquis, but “the clot thickens” has a sort of poetry, right? I almost titled this post “Two Needles. One Vein.” Also sort of poetic.

Monday I met with a hematologist and together we decided that since I don’t know half of my medical history, we’d go ahead and do a work-up to rule out any genetic factors which may have caused the blood clots in my legs.

The end result of that decision was a butterfly needle in the one and only great vein in my left arm and TWELVE VIALS OF BLOOD. 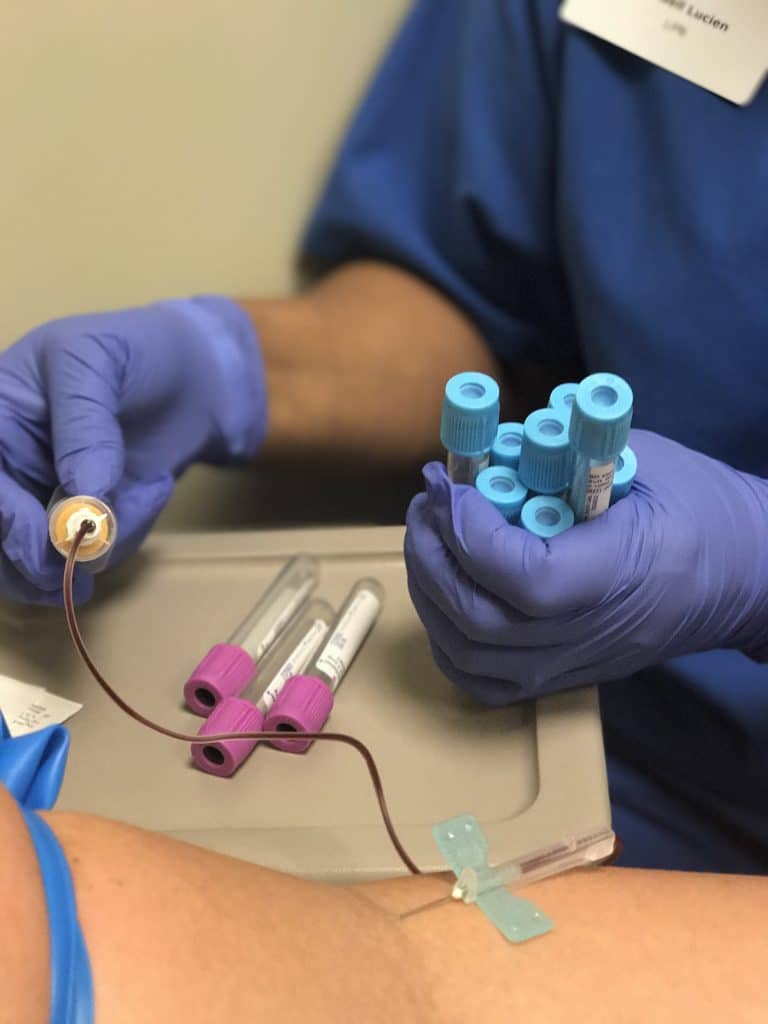 The children were with me. They were the most stressful part. Between Joshua saying “Mom, that is…like…REALLY ACTUALLY BLOOD…” and Emma’s repeated attempts to touch everything (and the impending OMG of it all) Monday night ended in half a Xanax and going to bed early.

She also wanted me to see radiology for a chest CT the very next day. When I say I knew the results of this test before it happened, I’m not joking. I have known that they would find pulmonary embolism because OF COURSE they would.

That was two days before we discovered the blood clots in my legs. I know I’m out of shape, and yes, I had recently battled the flu and bronchitis, or what I thought was bronchitis, and sure, my allergies are always haywire this time of year. But there was something about that particular instance that was just…not normal.

I messaged Dan and told him about it nearly immediately while I was trying to regain my breath and we both shrugged it off as being a sign my body just wasn’t ready for exercise again. We never, ever thought at that moment that it was a sign my airways were being constricted by pulmonary embolism.

(Fun fact: coughing is a sign of both pulmonary embolism AND bronchitis, so now I’m wondering if I’ve had these clots in my legs for longer than just a few weeks.)

Anyway. I got a call at about 10:30 in the morning that my CT scan was scheduled for 2:00 p.m. that same day and oh by the way don’t eat or drink anything for four hours beforehand. If you ever want to make yourself really, really thirsty, have someone officially tell you that you can’t have anything to drink. Works like a charm.

I got myself over there, filled out all of my paperwork (again), handed it over and heard “that’ll be $578, cash, check, or charge.”

I’m sorry. Are we saving my life here or am I buying a handbag? 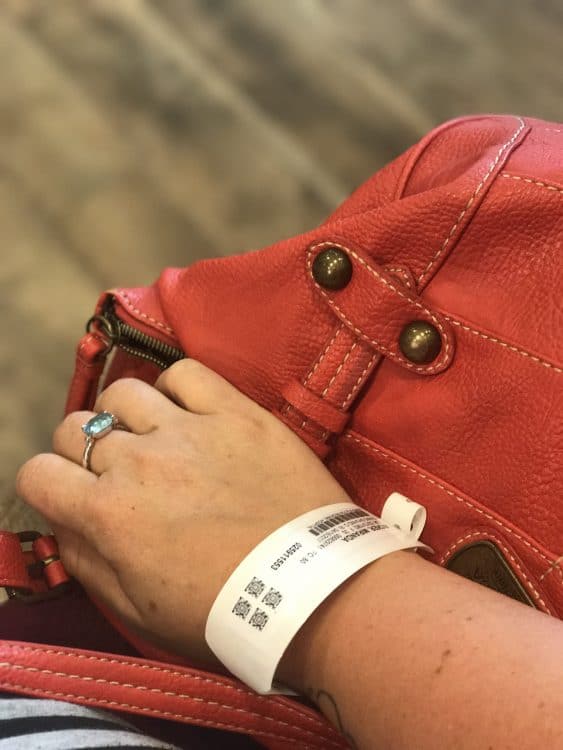 I have a whole ‘nother post about the health insurance side of this, but I really need to keep myself from getting too worked up. I threw down our HSA card, which I’m really, really glad we have, and paid for the pleasure of being stuck in the same vein for the second day in a row.

The radiologist hooked up an IV to my arm and warned me that the contrast dye would make me feel like I was peeing myself, but that I wouldn’t actually be peeing myself. Probably. I peed beforehand anyway because actually peeing myself was the last thing I needed.

That IV was definitely unpleasant. It was a larger needle. It hurt. It was in an already tender vein, but that’s the best one I’ve got, so winner winner chicken dinner. The scan was done in a matter of minutes and I was on my way back home.

The hematologist told me not to expect answers until Friday, but about five minutes after walking in the door following having the scan done, she called to tell me that there were, in fact, blood clots in my lungs. The good news is that I’m already undergoing treatment.

We’re still pretty sure hormonal birth control caused this, but either way, the treatment for pulmonary embolism is the same. Blood thinners to prevent more clots while my body reabsorbs the existing ones.

This probably means I’ll be on the blood thinners for a longer period of time, a minimum of 6 months as opposed to 3. It also means I have to monitor whether or not I feel short of breath and how hard I feel like my heart is working.

If either of those things feel abnormal, I am to go directly to the emergency room. Do not pass Starbucks. Do not collect 200 Stars.

But I’m alive. I could be not alive and that would be definitely worse than this.

Wow that is crazy....September 2020 I had bilateral pulmonary embolism. The 2 in my lungs were fairly large and smaller ones in my legs. I had to have both thrombolysis and thrombectomy. I am so glad that you are doing well and it sounds as if your clots were caught early. Unfortunately, I ignored my symptoms cause I thought I knew where they were stemming from.

So sorry to hear you have gone through this. I have a blood clot in my leg, actually more than one. They put me on Xarelto and sent me home to follow up with a doctor.. I'm afraid of this blood clot traveling into a PE. Not sure how much I can control and how much is out of my control. Hope you are doing well

I don’t know if you check your comments on posts this old but thank you. I really needed to see this. Currently laying in a hospital bed on oxygen with several pulmonary embolisms in both lungs and clots in my legs and I am terrified. Same situation. Birth control and trying to exercise leaves me feeling like my lungs are dying. No one around me understands how I feel but I feel like you do. Thank you so much.

aloha miranda, hope you are well,,,new member of PE club and wanted to know what 12 months later since your last post here is for you... please be well

Hey Miranda!!! Thank God you’re okay. Hope you are much better by now. I suffered from the same this month, that's why i was reading and found your experience. Did you stop Coffee or no? i am addicted to Coffee!! I take Apixiban 10 MG daily.