It’s been a rough few weeks/months in Mirandaland, y’all. In January I mostly amicably split from a freelance gig I’ve had since 2012. Emma got the flu, then I got the flu and then I got bronchitis.

At the end of February, my job dissolved in front of my eyes during what would prove to be my second-lowest grossing month with WineShop. (I was also not re-elected to serve on my HOA board, which, okay, whatever. #Surburbia.)

It was a LOT. All at once, back to back, rapid fire. Just…stuff happening left and right and I’m like “am I taking crazy pills?”

I now have my very own prescription for Xanax. Anyway.

I survived. I got by with a little help from my friends. (And Xanax.)

I owe a few people out there some serious thanks for helping me through what has been a string of the worst few weeks I’ve had since…probably since my dad passed away. I absolutely don’t know where I’d be without the people who held me up while I helped hold others up.

They listened. They cared. They checked in. They sent good vibes. It made all the difference in the world.

One day I opened my front door to find a bouquet of flowers on the porch from The Bouqs Co.* 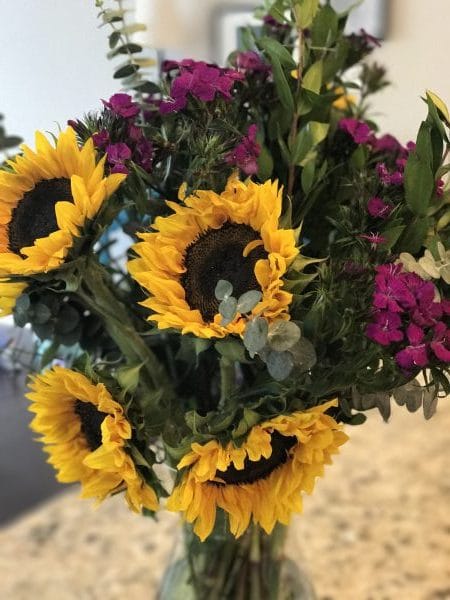 Suzanne and Alena, two awesome friends, sent me these flowers and they arrived in the middle of what was probably the worst week of the string of very bad weeks. Of all the things that could’ve made me cry, their kindness did it, so I got to cry good tears instead of bad tears.

(They made my mom cry, too. The good tears though.)

Jill and Morgan checked in with me every day, multiple times. If I needed to rant or express extreme emotions or just be exasperated, they listened without judgment.

Susan was a rock, getting focused and making lists because lists are what she does. She took on tasks I was in no way equipped to tackle.

I received messages from people just letting me know they were thinking of me. They were putting positive energy out into the universe for me. It felt awkward but also nice. (Mostly awkward though. That’s another post.)

No, really. A surprise PARTY. For me. 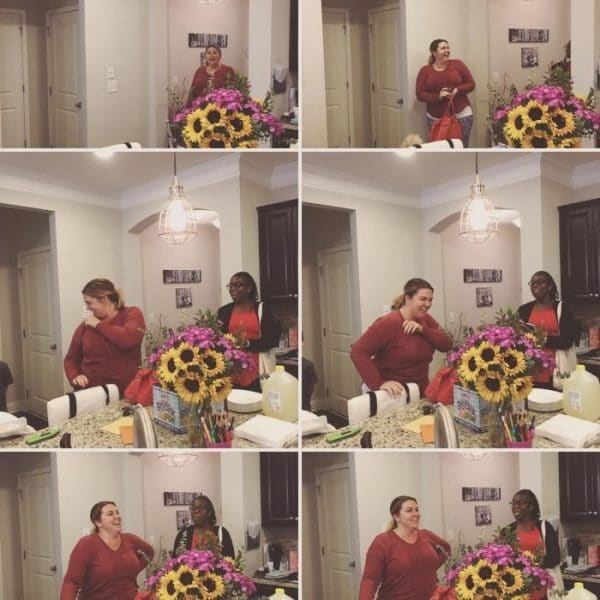 (The Bouqs flowers are about a week and a half old in those pictures! Amazing.)

My BIF Dawana and I had plans for her to come into town for the weekend before my birthday. We were going to run a 5K and get mani-pedis and just…run a 5K?

Except I don’t run. And I told her “Yeah, so I’m not running this thing. Also I am missing Joshua’s baseball game and I’m sort of upset about that.” She just replied, “well, your husband said he has a lot more games, so just drive me there.”

I got up on Saturday morning and drove her to Midtown so she could run while I sat in Starbucks doinking around on my phone, and the whole time I was thinking “Okay, so after we do this, what do we do?”

We grabbed a Reformation beer, ate some (delicious, free) food, listened to some music, and then it was time to go back home where we would do…I had no idea.

Apparently, I’m not very good at entertaining even though I really like to entertain because I had no plans to do anything at all. Except I kind of wanted a nap.

Naps were not in the cards and Dan was VERY STRESSED OUT about the fact that I wanted to nap. Someday people are going to believe me when I tell them that naps are magical. Saturday wasn’t that day.

We went for manicures and pedicures and when we walked back into the house SURPRISE! Our neighbors, friends, and my mom were there.

Dawana and Dan had organized the entire thing. My first (and probably only) surprise party. I had no idea. None at all. There was food, wine, beer, friends, and Cards Against Humanity.

My soul really needed people. It needed time to get away from stress and Facebook so I could just breathe.

It was perfect. And now I’m 35, and things feel lighter somehow. Happier. Healthier.

There was a LOT of stress in my life in the first three months of 2017, but now there is decidedly less stress. And that’s not the Xanax talking.

If I’ve learned anything, it’s that our relationships with people are what matter most.

All of this, even the anxiety, has been a beautiful reminder that I have people in my corner, in the flesh and online, even when I’m feeling completely alone.

I really can, and do, get by with a little help from my friends.

*I wasn’t paid to promote those flowers and neither were my friends. But this service seems awesome and I’ll use it in the future.

That Time I Had a Deep Vein Thrombosis: A Blood Clot Story - Caffeine and Cabernet

[…] how my husband and my friends threw me a surprise party for turning 35? I also got a blood clot for my birthday. I am now the proud owner of not one deep vein thrombosis, […]

I am really, really happy you are on the side of less stress now. Love you!