Remember how my husband and my friends threw me a surprise party for turning 35? I also got a blood clot for my birthday. I am now the proud owner of not one deep vein thrombosis, but two. 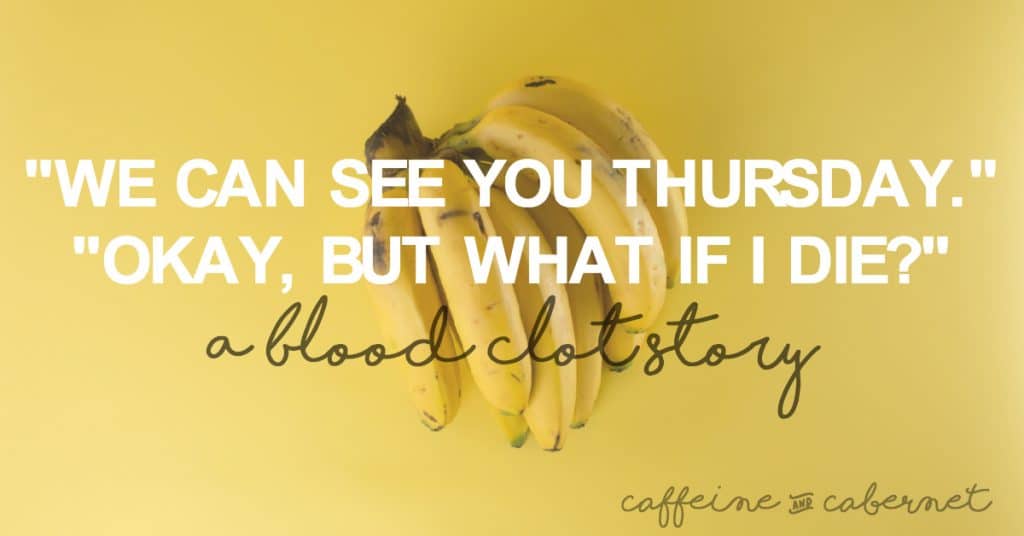 I remember saying to someone, maybe myself, on the Sunday afternoon following my party that I felt like I was about to get a Charlie horse and we needed to get some bananas. Mmm. Bananas.

I chalked it up to being dehydrated because it’s not like I didn’t have a lot of wine the night before.

I woke up on my actual birthday with a really intense, really sharp pain in my left calf. It hurt to move my leg. It hurt to put weight on my leg. It just…it hurt. That Monday night, my birthday, I had Dan rub my leg. I’d done some Googling and it was either a blood clot or a muscle strain.

I’ve known a few people who have had blood clots in their legs before. All signs point to imminent death, and even though at least two of those people are still alive,  every story on the Internet is about how someone died from a pulmonary embolism and they didn’t even know they had a blood clot until after it killed them.

Seriously. That’s…every story. Death. And still, I didn’t go to the doctor. Because our insurance is the actual WORST, I willed it to be a muscle strain and went to sleep.

Tuesday morning the pain was so bad in my calf I almost started crying. I have a pretty high pain tolerance so this was a big deal for me. And still, I told myself it was a muscle strain because, again, our insurance is so terrible. Dan told me to go to the doctor and I said “I’ll think about it.”

I could NOT fathom how, after having just lost my job, we could also afford a deluge of medical bills. Our deductibles are so high! What if one of the kids breaks an arm or leg!? We will need our medical savings for them!

So I just took some Advil and went on about my day. The pain lessened, so I thought “ha! It WAS muscle strain!” and tried my best not to think about it, even though I also could not think of a single possible way I had strained a muscle drinking wine and playing Cards Against Humanity.

The pain never went away completely. It just…lingered. This nagging, creeping sensation in my lower left leg. My toes and kneecap tingled sometimes and I started thinking maybe this was a nerve issue. Maybe I had slept funny and something was pinched or compressed. Surely that was it, right?

Longish periods of sitting or standing (like, an hour, tops), or anything where my leg had to dangle, led to really sharp pains in the center of my calf muscle, deep near the bone. Even now, while I’m writing this, I can feel it. Except I’m now acutely aware of my twin blood clots which could’ve killed me at any point in the past two weeks.

And since most of the stories I’ve read over the last two weeks end in death, I’m only sort of exaggerating the seriousness of what I’m talking about right now.

Yesterday a friend who has actually lived through two blood clots (involving her entire leg from groin to ankle and hospital stays to recover) posted this article, “A Warning Then Sudden Death From a Blood Clot,” and I read it because that’s what I’ve been doing for the past two weeks. Periodically Googling “blood clot, lower leg” to see if maybe, miraculously, the symptoms of a blood clot have changed. (They haven’t.)

“They feel the cramp,” Robertson said of people who unwittingly suffer blood clot symptoms, “the Charley horse in their calf, and blow it off — then die of a pulmonary embolism.”

That’s it. That’s the quote that sent me to the doctor today. The only definitive symptom I’ve had has been this nagging Charlie horse-like sensation in my calf. That’s it. Aside from the nagging in my brain telling me this wasn’t just a muscle strain and I was probably being an idiot. (I was being an idiot.)

I don’t have high risk factors for this. I haven’t had a recent injury or surgical procedure. I haven’t been on any flights or long car rides where I haven’t been able to move freely. It didn’t matter. I read that line in that article and knew I had to go to the doctor.

(It has only just now occurred to me that Thursday is tomorrow. Even so, BUT WHAT IF I DIE.)

She found an available appointment on her schedule and got me in that afternoon. The nurses took my blood pressure, which was elevated and which is never elevated, the doctor came in and I told her I had probably just been reading too much on the Internet, but I wanted to be sure.

Despite the fact that I had ZERO outward signs of having a blood clot, she decided to send me to a vascular specialist on some kind of magic fast orders for an ultrasound. This is the only time I have ever been so thankful to have so many doctor’s offices in a two-mile span of one road in our town.

I drove one mile away and had an ultrasound technician ready to scan me.

As a sidenote here, if you ever play poker with an ultrasound technician, you will probably lose so just be prepared for that. I watched that woman’s face like a HAWK the entire time she was doing her thing and staring at all the static and pressing on my legs to hear the whooshing of my blood and she gave away nothing.

Then she was done.

“You definitely have a blood clot, two actually, and you’re in luck because we have a doctor in the building today. He’s normally in surgery.”

I met with the doctor who once again reviewed my risk factors. The only one we can settle on as being a causative factor for my blood clot is birth control. Birth control is linked to slightly higher rates of deep vein thrombosis in some cases, and TA DA! I’m one of them. Probably.

He was great. He wasn’t alarmist and didn’t scare me. He didn’t criticize me for not coming in sooner. He just said “we see these about 12 times a week” and reminded me that this is not normal for my age. I’m otherwise healthy and this is probably just a freak thing that has happened, but whether it’s a freak thing or something I have to think about in the future, the treatment is the same.

Blood thinners for now. And no contact sports. Got it.

Because I’ve had a couple of spells of difficulty breathing lately after doing simple things like going upstairs and back down, or spending 1 minute 30 seconds doing low-impact cardio (SERIOUSLY), I’ll be having a chest CT scan to make sure I didn’t pass any small pieces of these clots into my lungs.

I also have a date with a hematologist to make sure there are no genetic factors at play which could mean a chance of recurrence down the road. I don’t think that’ll be the case, but since I only have half of my medical history, I really don’t know.

Go to the doctor. Don’t think that because you don’t have all the symptoms it can’t possibly be that. Just go get it looked at, okay? Okay.

Hi I was twice a victim of DVT the past 7 months. On my first DVT event I had a Pulmonary Embolism as well. I am taking Xarelto and wearing a compression stocking on my right leg. It's not fun, but I believe Jesus saved me. I was admitted to a psychiatric ward about 17 months ago and are also on depression and antipsychotic medication. When my dad passed away 9 months ago I did not do much but sleep. The inactivity must have caused the DVT. While on the antipsychotics and anti depressants I tried to commit suicide by taking an overdose of sleeping pills, but my sister came to visit and found me on the bed passed out with the pills on the counter. She immediately took me to the hospital where they found the blood clots on the lungs after running tests. I am lucky to be alive.

I'm so sorry to hear about all you've been facing, Marius, but I'm glad to hear you're still here.

Wow! That's so scary! Thank god you got to the Dr.

Wow! Glad you are okay and I thank you for the warning signs. I remember when David Bloom died from this. I loved him on The Today Show. Take care of yourself!

Well, shit, that's not cool. But I'm glad you're okay-ish and that you read what you read and you stayed the course and had it checked. Because, effing scary, mama.

Yep. Effing scary. I think I was more scared after learning that it was actually a blood clot because of the realization that at any point in the prior two weeks, I could've died.