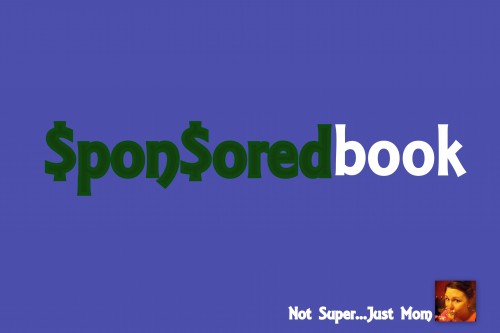 You might’ve noticed some changes to ye olde Facebook lately. Namely, the addition of “sponsored” content. Or maybe you haven’t noticed it yet. So consider this your notice.

It started quietly enough, really, and then the slope of sponsorship got slippery.

At first there were ads in the sidebar. They were innocuous and tailored to the things you’d added to your interests or pages you liked. Or things your friends had liked that you might like too, because hey, you’re friends. They were easy enough to ignore (thanks to being inundated all the time with advertising) or block with a third-party ad-blocking program.

Now these posts are in your news feed, taking over your timeline. They’re even trying to take over your wallet.

You may have heard the words “Edgerank” and “algorithm” lately. “Algorithm” means “math” which means I only sort of understand that part of it and there’s about a snowball’s chance in Hell I’m ever going to understand it anyway because numbers. But in words, what it means is:

The content you’ve OPTED IN to receiving is not being shown to you because of Facebook’s “math.”

I’ll say it again: Facebook isn’t showing you what you’ve asked to see. And it isn’t sharing what we’re asking to share.

On the blogging end of things, Not Super…Just Mom has 319 “likers” on its Facebook page.

(Oh, yes, I have one of those. You can like it, too, if you want, though you may soon be inclined to ask “what’s the point”?)

Of the 319 people who have CHOSEN, willingly, to like the page because they want to see what’s posted there, on any given update, at most only about 100 to 120 people see it. That number is usually around 60.

At most, 1/3 of the people who like my page can see what I’m sharing there. Unless I want to pay money to have more of the 319 people see it. Not all of you. Just more of you.

Facebook in a viral sense isn’t this blog’s bread and butter, so as a brand, this doesn’t affect my “reach” TOO much. In general, my writings are for me and the repeat customers who read to know my story. I tend not to write things that are “share-able,” I guess.

But you, the reader/liker/Facebook user who has opted in to seeing my mundane ramblings in your news feed? You may not be seeing them. In fact, I am not even seeing all of them.

That’s right. The Facebook updates for this blog are not showing in my personal news feed. And believe me, I’m interested in and subscribed to and have opted to see my blog’s posts in my news feed. And yet I’m not seeing them.

The fact that you’re not seeing what you’ve specifically asked to see should make you cranky.

As a “brand,” I understand that I’m technically using Facebook to advertise and as such, they are within their rights to ask me to pay for said advertising. I probably won’t pay for it because 1) I don’t want to feel like I’m buying eyes and 2) I’m sort of cheap.  On the brand end of things, this is your–the subscribers–battle to fight. Because you’re pawns in the sponsorship game right now.

But things aren’t just screwed for the little brands on Facebook.

On the personal end, Facebook has decided that only some of your updates are important enough to be seen by everyone.

Unless, that is, you want to pay up. See? 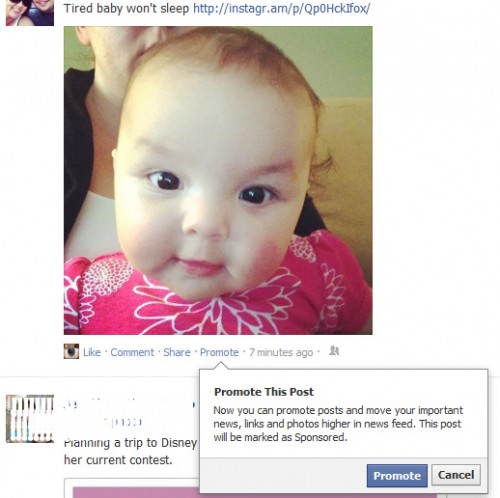 In addition to “allowing” brands to promote their posts, you’re now able to promote your personal status updates as well.

For the low, low price of $7, you can make certain that all of your updates bout poop, sports, what you ate for dinner, politics, random, cryptic song lyrics, and how you’re a special snowflake are seen by everyone instead of just…all your friends? The friends Facebook has decided are worthy enough to see them? The random 100 people of the day as decided by some funny “math”?

If I’m friends with these people and both of us had to approve said Facebook friendship, why should Facebook get the say in disallowing our mutual sharing of inanity?

(Note: I’m not speaking here of being able to see the “Sally Sue liked Schnitzel Pies” things. Those are just bad graffiti tags on a highway underpass that junk up the news feed. And also, speaking from personal experience, they cause more trouble than they’re worth.)

Facebook is playing parent and censoring the information you’re presented based on who ponies up the pennies.

I know Mark Z. might need to make a buck since his stocks are in the toilet, but when you have the #1 most highly trafficked website in the WORLD, is this the way to go about it?

loved this! linked up on my post today: http://www.masteringmommybrain.com/nterest-groups-and-subscribing-can-you-see-mmb/

I wrote my own little letter to Mark about his issue, too: http://everydayepistle.com/2012/10/12/dear-mr-zuckerberg-the-customer-is-always-right/

Loved your post and said as much over there! It's really just...this sucks, you know?

Hey chickees! On the german facebook version there is a solution for that problem! And I just checked - it works in the US version as well: Just ask your readers to add your site to their "Interest List": - click on the cog next to "Message" and choose "Add to interest list" and you will still see all the updates straight on your wall!

I've seen this advice floating around a good bit, and if it works, that's awesome. The larger issue, at least to me, is that people shouldn't HAVE to do anything extra to see a page's updates, you know? You liked it, you see it. It should be that simple.

You know facebook is going to try to get money from you anyway they can . It is so sad that the fun ole days of just checking facebook to keep up with friends since highscool and college has become ” big brother”, censor, and give me give me money!!