The debate started (I think) about whether or not formula companies should be able to hand out free samples and swag to moms in the hospital. TFB said that they shouldn’t be able to hand out swag and Valenti said TFB wasn’t being a feminist because that was taking away women’s choice to formula feed.

Choice, at least in the beginning, wasn’t the point. And informed and educated choice isn’t the point of this post, just so you know.

As I watched this debate, I found myself paying attention to the conversations happening around me, in print and online, and what I found made me sad. And here’s the point at which I will likely offend some people, so my apologies in advance.

The marketing of formula in this country (and elsewhere) is awful for breastfeeding.

Here are two real-life anecdotes from the past week:

Last Thursday was my NT scan. While Dan and I were waiting to meet with the doctor to discuss the results of the ultrasound (which we didn’t actually talk about) I opened a copy of American Baby magazine. There was an article on the cover titled “10 Things Nobody Tells You About Breastfeeding (But We Will)” that caught my eye. I knew before I turned to the article that I probably wouldn’t like the slant of the article. (And I didn’t.) And I said to Dan, “I bet there’s a formula ad either right before or right after this article.” (And there was.)

Here’s the first page of the article: 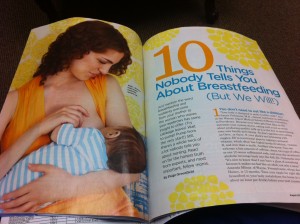 The things you don’t know:

I’d like to rebut the bold statements, but I won’t. Not yet. But I read through that list and I thought “Gee, you know, 6 of the 10 of these are negative, and a couple of the others could be spun that way, which doesn’t seem encouraging at all.” And then I looked at the pages before and after the article.

Immediately preceding the article, I found this: 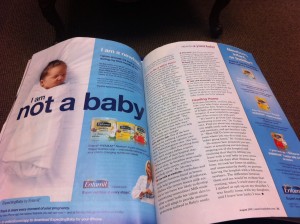 If I’m flipping through this magazine and a two-page formula advertisement with a peacefully sleeping baby on it is right before an article that isn’t exactly positive? That’s bad marketing. Or good marketing, depending on which side of the dollar sign you’re standing.

And then there are subtle ways formula advertising gets mothers:

A girl I went to high school with gave birth to her second child two weeks ago. (Her first was born 9 years ago.) She posted on Facebook that he was fussy and gassy and constipated and he didn’t sleep and she wanted to take him to the emergency room. In the comment thread, she said that he couldn’t “do milk-based [formulas] or breast milk” so he was on a sensitive formula (and they’d tried soy).

My first thought? Sometimes babies are just fussy, especially the new kids. And as much as it sucks to hear that, and believe me, it sucks and I know because I heard it and lived it, it’s true.

Which leads me to wonder how many mothers start out breastfeeding and within a week have a fussy baby and reach for a “for fussy babies” formula that promises great things hoping it’ll be a miracle and the baby will stop crying and they’ll finally get to sleep who then end up sabotaging their breastfeeding relationship and thinking they are personally broken when their milk supply tanks because no one told them that if you supplement you should also pump. The formula can certainly doesn’t say so. The mothers who had “easy” babies and say “Oh, little Suzy was on such-and-such formula and she was awesome!” don’t say that.

Before words get put into my mouth here, I don’t think women are stupid and incapable of NOT falling prey to advertising. I think most of us are intelligent and capable of rational thought. Most of the time.

But I do think that, as a gender, we’re more likely to be driven by pathos (our emotions) when advertising is directed at us. And if you’ve met a pregnant or newly-delivered mother and you think she’s NOT a bundle of emotions? You have not met the pregnant and newly-delivered women I’ve met. Or me, apparently. Because while pregnant? I am driven by my emotions.

And pickles, but that’s another story.

Miranda - not much time to comment, but I applaud you and your very informed and "pro-baby" stance on breast feeding.

I think you should be able to opt in for the samples or not. I physically couldn't BF. As in nothing came OUT of my boobs when it was go time. When I FF I did it because it was that or nothing else to feed her. I was very sad that I didn't bf, and it's still my plan to BF next time. But I know it may not work. And when if it doesn't I will be MORE than appreciative of all the cans of formula in the mail, all the samples. All the "swag". Because that shiz is expensive.

I understand that BREASTMILK is a more physically healthy option. But sometimes it doesn't work. Sometimes the act of breastfeeding isn't healthy for one of the parties. Sometimes there are circumstances that you can't just color with the same colored crayon.

I think it's okay for moms to get marketing swag from formula companies, la leche league, breast pump manufacturers, diaper companies, and all of that. I assume they pay the hospitals and doctors for that. And anything that will keep the prices of the medical bills down is good right?

But I agree that it should not be one sided. Mothers should be able to receive information about both breastfeeding and formula, the pros and the cons for both.

This is a sensitive subject . I agree that those marketing practises are underhanded and that article should have had 'this is sponsored' plastered all over the top of it. And I'm all about women's right to choose what is the right method of feeding their baby. But it should be an informed choice. There isn't enough help for women who want to give breastfeeding a try. It's not always straight forward and it does need patience and help. I breast fed DD until she was 15m but at the beginning a retired health worker had to help me to hold her in the right position to latch on. An informed choice is the right choice, whatever road it takes you on.

It is sensitive, and I tried to treat it in a sensitive manner. I'm not saying that formula feeding is wrong and the practice should be outlawed. But their advertising? Needs some restrictions.

And you're right--the education that's out there isn't always the most helpful. We aim for the "best case scenario" in breastfeeding classes and teach women what they need to get started. What we should be teaching them is "what to do if..." kinds of things and sending them home feeling knowledgeable about what can go wrong and how to make it right.

This is a wonderful post. I was lucky enough to give birth in a hospital that is very pro breastfeeding, but I still got samples of formula from the formula companies because I signed up for something at Motherhood Maternity. I have nothing against the formula companies just their marketing.

With the second baby, bresatfeeding was easier. But it was different. No more struggling for supply and pumping all the time. I had an oversupply in the beginning. I was showering my daughter daily with breastmilk. After 6 weeks, that issue resolved. She turned a year this past week, and I am starting to wean from the pump first. I wish all women could have the same access to breastfeeding resources and information so that they can make their own informed choices.

I'm with you. I don't have anything against the formula companies, but I do begrudge them their marketing practices.

I also don't think that all FF mothers make UNinformed choices. I think some do, like my sister who didn't really know about BFing and didn't care to know more. She was 19 or 20 when she had my nephew, her first child. Since that was what she knew, she did that with the other two as well without much regard to any alternatives. But I think many mothers who choose to FF are informed when they make that choice.

I hope that my second time around is different than my first.