Alternate title: My wish list for Joshua since he’s not even remotely old enough to have wants or to care what he gets as long as he gets to play with the boxes, bags, and tissue paper.  But whatever.

I felt like that was a little wordy.  Also? I’m not good with numbers.  There may or may not be more than ten things on this list.  I may have taped my fingers together to keep from buying these things.  My restraint goes pretty much our the window where Joshua is concerned unless my rational mind is given time to take over my impulses.  Thank you, rational mind.

I’m a fan of wooden toys.  I’m not gonna lie.  There’s something earthy and wholesome and natural about them, so I gravitate toward them when I’m looking for toys for Joshua.  Plastic toys seem to be so overrun with merchandising and advertising that I’m kind of turned off by them, so most of the toys you’ll see here are wooden. Anyway, that’s my crazy earth mama soundbite for the day.

In no particular order, here it goes:

We’re big fans of the Swedes around here and Ikea? Ikea is the Swedes’ gift to us mere mortals who don’t have the know-how to flat pack an entire kitchen.  So? Is it any surprise that I’m really in love with their kids toys?  No. At least it totally shouldn’t be. 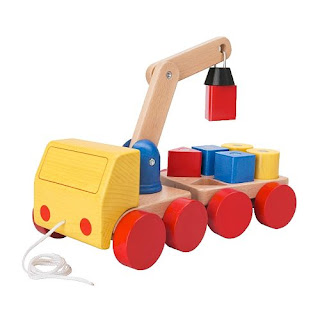 1. I’m in love with this Crane. It’s wooden, so it’ll be durable. It has magnets to make it easy to pick up and load the blocks into the bed of the crane.  Or whatever that thing is called. I think Joshua would love this. I also think he’d love these Stacking Construction vehicles from Melissa and Doug, too. 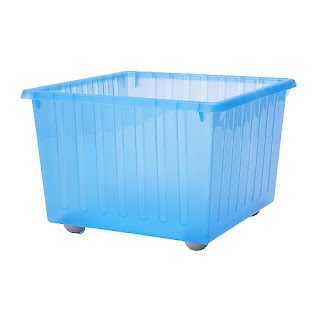 3.  We’re going to need some more storage around here, and I think these bins from Ikea would be great.  They have wheels on the bottom which makes moving them around easy.  And I have a feeling that after Christmas, we’re going to have to do some moving around of toys.  So, wheels it is. 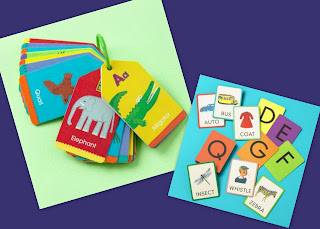 4.  FLASH CARDS.  Aren’t these adorable?  I mean, seriously.  My kid loves pointing things out in his books, so I think it’s time we got him some flash cards.  The question is, the ones on the ring that would stay somewhat contained, or the ones with the cute vintage pictures on the back? (How is this a question? The answer is so easy, right? Go with the ease of cleaning because you are not the neatest person in the universe, right? ::sigh::) Both sets are from The Land of Nod.  The ring cards can be found here.  The vintage picture cards can be found here.  What would you do? 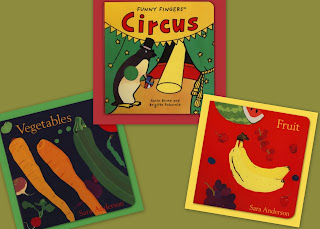 5. Books.  I mean, I’m a teacher.  And he loves books.  Was there any question that he’d get books for Christmas?  Do you think he’ll start to eat fruits and vegetables if I get him books about fruits and vegetables?  I’m willing to try anything here, people.  The Land of Nod has a decent selection of board books I’ve never seen before.  That’s where I found these. (“Thank you for doing all this savvy internet shopping for me, Miranda!” “You’re welcome, y’all.”) 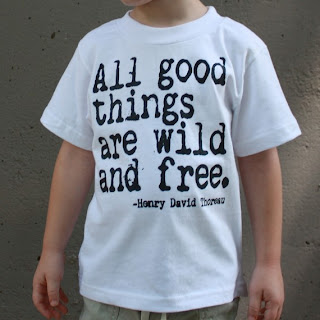 6.  Clothes.  Specifically this shirt from Happy Family on Etsy and some rough and tumble blue jeans because he’s only got two pair and he’s growing like a weed.  I want to put a brick on his head to keep him little forever, but I can’t.  He is wild and free.  And Thoreau is my favorite.  And as much as I’m a fan of naked babies, I think society in general would frown upon me letting him run around in the buff.  So, clothes it is.  One day he’ll hate getting clothes for Christmas.  For now? He has no idea. 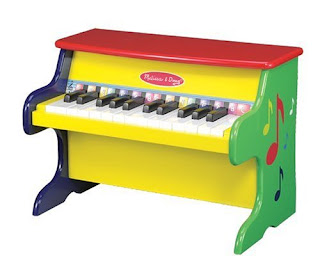 7. I’m pretty certain that half the mothers reading this think I just lost my mind.  You see, I’m a believer in the saying that a quiet toddler is a mischief-making toddler.  So, I prefer my child to make noise.  That way I know what he’s doing if he happens to be out of my sight.  And yes, sometimes that happens.  I have been DYING to get him this Melissa and Doug piano since I saw it on a Baby Earth lightning deal (or whatever that thing is called where the price ticks down the longer the item is listed until it’s sold out.)  I have seen this piano no less than 10 times. And every time? I have not bought it. Because I’m a moron, apparently.  So, this Christmas? I need to get this piano into my house.

(In addition to believing that kids should make noise so you know what they’re doing when you happen to not be in the room with them, I believe in the power of music to enhance learning.  I believe in the correlation between students who play an instrument and those who excel academically.  And with my band-geek roots? There’s a slim chance that Joshua’s not going to have some kind of music in his blood.  So I better go ahead and put an instrument in his hands before he decides to play the saxophone.) 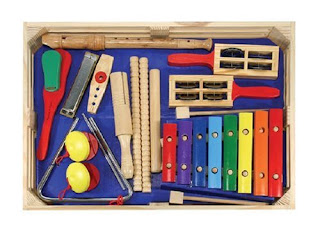 8.  While we’re at it, I’ll likely go ahead and get him this Melissa and Doug Band Set, though not from Amazon. It’s on sale at our local big box club store for cheaper than that.  And that way, if he ever has friends over, they can make all kinds of raucous noise together.  Should make for some fun, right? 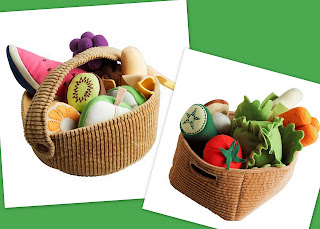 9.  Pretend play is great for kids this age, right?  If I buy him faux fruits and veggies can I trick him into eating the real thing? I don’t know.  But he’s going to need some fake food from the Swedes.  Because of this: 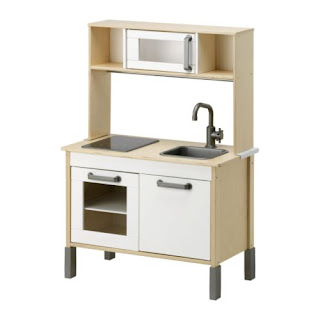 10.  That’s right, y’all.  I want to get my son a kitchen.  So he can be the next Iron Chef.  Or because he really, really loves playing with the play kitchen in the 3 and 4 room at daycare.  I mean, REALLY loves it.  Category 29384829 meltdown when I tried to take him away from it loves it.  So? He needs one for himself.  This one is from Ikea.  (I mean, of course it is.  Look at its minimalistic design. And completely gender neutral color pallet.)  And Ikea has this entire line of play toys that go along with this kitchen. Or with any kitchen, really.  Duktig is the most awesome name ever. How do you pronounce it?

I like the red Kidkraft Vintage kitchen and my ultimate supremo LOVE kitchen is the Kidkraft Cook Together Kitchen, but I think it’s a little too big for our living room.  I wouldn’t mind having the Red Vintage OR the Ikea one in my living room.  And Joshua would love both of them, I’m sure.  So, it all comes down to price and availability, I think.

We have a kind of small-ish house.  There’s no playroom here.  So most of Joshua’s toys are in our living room.  (I’m not ready to have toys in his bedroom yet because I think he needs to know that’s where he sleeps, not where he plays, you know?) Anyway, the quest for a kitchen that I wouldn’t mind having in my living room has been difficult.