Last night was my 10 year high school reunion.  This was the culminating event making October my own personal Hellmonth.  The planning process for this reunion, and the drama that went along with it, made last night feel almost tantamount to giving birth.

To say I was nervous would be an understatement.

I took Joshua shoe shopping with me yesterday morning and y’all, that’s maybe my least fun thing to do ever. In the history of ever. I think I’d rather go through med-free pitocin labor again than take him shoe shopping while flying solo.  But, I did pick up this awesome pair of gray pumps to rock last night. 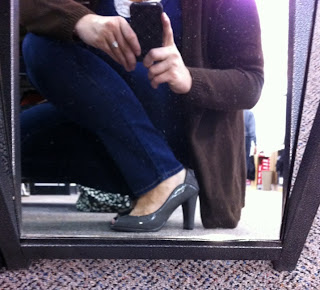 Joshua, meanwhile, played a rousing game of kick-the-sippy and rearrange the benches.  And apparently I said his name so many times the entire (nearly empty) store heard me because as we were leaving the Heaven that is DSW the clerk said “Bye, Joshua! You be good for your mama!”

Because I’m incapable of giving up Joshua’s night time routine to a sitter, and because my mom (the only other person besides me and Dan who’s put him to sleep) works at the convention center where we held the reunion, Dan stayed home with Joshua and I went to the reunion by myself.

Y’all, I think it was good for my soul to go alone.

I listened to the 90s station on XM on the drive up and heard some old favorites. I reveled in the nostalgia of that stretch of interstate connecting my new life to my old one. I reminisced about the things we did. The places we went. The memories we shared.  And I hoped the night wouldn’t suck.  That I wouldn’t get there and feel like the same insecure girl I was in high school.

All things considered, the night was successful.  We visited with old friends.  The food was good.  There was a little bit of dancing.

It was a good night.

As we watched our senior video, I thought about a few things.

The first?  My hair was awful in high school.  Absolutely awful. Way thicker than it is now, but awful.

The second?  The girl I was back then is not the woman I am now.

I’ve been through a lot in the past 10 years, not to mention the last 19 months, and like I said in an email to the planning committee, “I’m a different kind of bitch than the one I was in high school.”  And I like the me I am now.

Now, I’m confident.  I’m aware. I’m stronger than I thought possible.  I’m not scared of being looked down upon for speaking up.  (Despite the fact that even back then, I still spoke up. Now, I’m just not scared of the repercussions.  The outspoken part of me has never changed. Nor will it. Ever.)

I realized last night that I liked high school while I was there, but I’m really glad there was more out there for me after that chapter of my life was over.  There was a point in time when I was so full of youthful ignorance that I really thought that my peer groups would never change and we’d all be exactly the same as we were then for the rest of our lives.

I’m glad that’s not the case.

I realized that sometimes people DO change.  (Ahem–Misty! 🙂 ) Sometimes the very people you thought would be the same forever are the ones who make the most changes.  People grow up.  They really do.  And growth is good.

I was kind of sad-happy when I went to bed last night.  I had a good night out. On my own. It was my chance to be me. Not Mom. Not Wife. Just Miranda.  Me.

I don’t get enough opportunities to just be me.  And it’s not necessarily that there aren’t opportunities available, but for whatever reason, I often pass them up. Out of guilt. Or exhaustion. But mostly probably guilt.

When I woke up this morning, I realized that the single best thing that has happened to me in the past 10 years is this:

I don’t know.  I don’t know what I expected.  Neither of those things has happened.

But I do know that, no matter what other people think, I’ve been successful in the past 10 years.

I don’t make a lot of money. But I’m drowning in love.  The fanciest title I’ve gained in 10 years isn’t my Masters degree.  It’s “mama,” and Joshua only calls me that when prompted.