Alright, y’all.  I love me some cupcakes. They are the perfect pieces of deliciousness.  Not too much cake.  Not too much icing.  Not as messy as cutting a slice and having to balance it on your fingers to get it to the plate because it’s too tall for the cake cutter and you haven’t mastered that whole balance it on the cake knife and use the cake cutter for support on the side thing.  (And really, who has mastered that? Except for probably my dear sweet Martha Jo–a Southern lady like no other.) (And if you have mastered that? Well. Teach me your secrets because half of my cake always flops off and lands on the table–icing side down.)
So, when The Brunette Foodie (aka, Stephanie, the woman who helped me have a successful outing with Joshua back in September) offered to guest blog a cupcake experience for me, I was like “YES PLEASE AND SEND SAMPLES.”  She didn’t send samples. But that’s only because she knows I’m trying to be a good McFatty.
Stephanie has a sweet little guy named Samuel.  Seeing him at our playdate all snuggled up in his Moby made my ute ache for the days when Joshua was a wee babe and I’d venture out to that very same mall and wrap Joshua up and just walk. And walk. And walk. Because that was the only way he’d nap and not scream at me. (On second thought, I don’t know if my ute was aching because it wanted to be occupied or screaming “HALLELUJAH!! CLOSED FOR BUSINESS!”)
Anyway, here’s a recipe for some pumpkin cupcakes.  Enjoy!
___________________________________________________________________
Hello, there!  I’m Stephanie from The Brunette Foodie, a twenty-something stay-at-home mom with an obsession for cooking & baking.  My son, Samuel, is almost 4 months old, and he loves eating his own fist and pulling my hair.  He does not like teething or the cat.
I know a lot of moms think making cool baked goods is hard.  If you’re like me then you usually suck at decorating cakes and cupcakes if it is anything more than plain icing.  So when I saw Karen Tack & Alan Richardson’s book, What’s New Cupcake?, I was ALL over it.  First, the picture on the front {it’s duck shaped cupcakes} is exactly what I plan to make for my son’s first birthday {yes I’ve had his party planned in my head since before he was conceived}.  Nathan {that’s my husband} was kind enough to surprise me with the cookbook late this summer.  He also said something like “I don’t actually think you can make any of these.”  He ended up with diaper duty that night.
So, here is an adapted recipe from that book.  Let me make two comments: this was the first time I used store bought cake mix & icing in years.  The recipe called for it, and I figured there was a reason, so I went with it.  I’m glad I did.  These are the BEST tasting cupcakes I’ve ever had.
Pumpkin Cupcakes {adapted from What’s New Cupcake?}
Makes 24, but I made 12 cupcakes & a loaf cake
Ingredients:
–          12 cupcake liners {orange is preferable, but I seriously couldn’t find orange ones anywhere}
–          1 18.25 oz vanilla cake mix
–          1 cup buttermilk {use in place of water in box recipe}
–          Vegetable oil {the amount on box}
–          4 large eggs {in place of the number called for on the box}
–          1 cup canned pumpkin
–          1 tsp pumpkin pie spice
–          2 tubes of orange frosting
–          16 chocolate chews {Tootsie Rolls}
–          9 wheat twist pretzels
Directions: 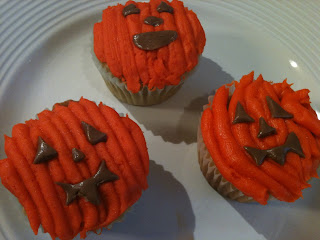 See, that wasn’t hard was it?  Sure mine don’t look super fantastic, but that is mostly because I was balancing a baby on one arm & decorating with the other.  I’m a huge fan of this cookbook.  HUGE.  I plan on going on a cupcake spree through the holidays.  You should definitely pick it up.  You’ll be set for cupcake ideas for life!
Head on over to my blog for some more easy recipes {shameless self-promotion}.
Click here to cancel reply.