I managed to get away for a bit on Thursday to get my hair done.  It was quite the ordeal.  See, I thought my appointment was scheduled for Thursday at 10:00 a.m.  So, I got up, took Joshua to daycare, drove three counties over, and frantically searched for a Starbucks (and if any of you have ever heard Lewis Black’s bit about the end of the universe being a place in Texas where there is a Starbucks across the street from a Starbucks, you know how frustrated I was at not being able to find a freakin’ Starbucks).

I finally found a Starbucks in the parking lot of the salon I was going to.

And let me explain why I go to a place that’s so far away.  It’s a school.  It’s low-cost.  The students there are awesome (usually) and I like that it’s a Redken school.  I’m kind of a sucker for Redken products.  So, that’s why I’m willing to drive so far away to get my hair done.

Anyway, while I was sitting in the Starbucks sipping my Pike’s Peak Roast, I got a phone call.  It was the salon.  Calling to remind me of my appointment for FRIDAY MORNING AT 10:00.  I said “Um, I thought that was today.”  She was like “Oh, no…we’re closed today for a staff meeting.”  Me:  “I’m in your parking lot.”  Her:  “Oh…I’m sorry.”

Luckily for me, my best friend decided to go back to school to become a hair designer (that’s the new terminology, for those of you who didn’t know!).  She’s only been there for six weeks.  But, I trust her with my child so I trust her with my hair.  I called her and fortunately, she had an early release because of their staff meeting.  So, we went to the beauty supply store and bought the color and she did my hair.  And I got to have an afternoon of girl talk, too.  Win-win! 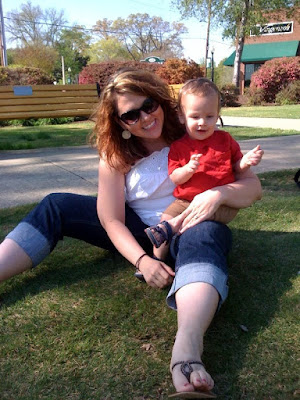 We took Joshua to the park today because it was such a beautiful day.  He had a blast running around in his new Umi’s (and yes, I bought him two pair.  The brown and yellow ones and the blue and red ones.  What can I say?  I love these shoes.) and we had a blast chasing him around and trying to get his picture!  I did get him to sit still for one, though.  Y’all excuse the spots on his shirt.  We’re still figuring out the sippy cup.