He has grown so much and so fast.  I don’t know where the time has gone.

We’re weathering our fourth ear infection in as many months.  And he now has EIGHT teeth.  Some babies don’t get ANY teeth until they are over a year old.  My child has a mouthful.  And he LOVES to bite me.  LOVES it.  He’ll bite my fingers, my arms, my hands, my shoulder.  He even tried to bite my neck the other day.  Perhaps me reading the entire Twilight series with him in utero wasn’t such a great idea.

He is speed-crawling and into everything.  He thinks it’s funny to escape down the hallway when we accidentally leave the baby gate open.  And when we say “you better get back here” he turns around and smiles and laughs at us.  And then keeps crawling in the opposite direction.

Speaking of laughing, the dog might be the funniest person living in our house.  He is fascinated with her.  She is only mildly interested in him.  And her interest peaks when he is in his highchair.  At that moment, she is firmly planted underneath the high chair.  She tries to look all innocent by laying there like “What?  I’m just being part of the family!” but we know that she is secretly hoping he’ll reach his hands over the side of the chair so she can lick his fingers.  Or that he’ll bang on his highchair tray and send a spray of Cheerios all over the kitchen in the interest of “sharing.”  I have smart children.  And for now at least, they get along.

We’ve tried to move into table foods and he hasn’t really taken to them like we’d hoped he would.  It’s okay, though.  We got the okay from the pediatrician to wait for a while and then try them again.   When he does decide he likes table foods, we’ll have to buy a third baby gate to keep the dog out of the kitchen.  She’s not going to like that so much.

Joshua can put the circle block into the circle spot in the mouth of his Tiny Love Pelican.  He also thinks it’s great fun to slam the other three shapes into their respective places when I set them up for him.  He would play this game for an hour at a time if we would play it with him.  (My attention span for this activity is about 15 minutes.  I must work on this.)  He can ALMOST get the rings on his Mula Stacking Rings every time but thinks it’s way more fun to let me put the rings on for him so he can dump them off and send them rolling around the living room.  He also loves his Mula Stacking Nest cups.  They provide countless minutes of entertainment!

I suppose that now it’s time for me to start REALLY thinking about his first birthday party.  Yikes!!  I can’t believe he’s been outside longer than he was inside. 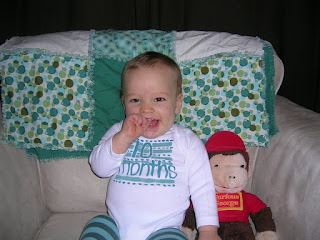 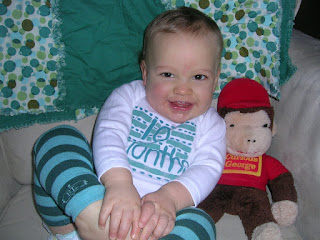 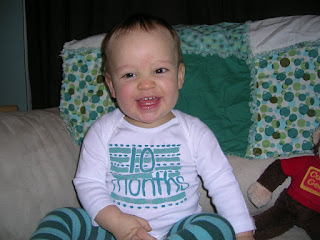 Such a cutie. I love that he escapes down the hall and gives you devilish grins when you ask him to come back.

time does fly with babies. my son (6 months) is so big...i feel like he was a tiny infant just a few days ago.

my daughter didn't get a single tooth until she was 14 months...i thought they'd never come!

Isn't it amazing how fast time goes? My daughter's almost ten months old too...I swear, she changes every time I turn around.

Stopping by from SITS, and I think I'll stick around. Us new mommas have to stick together!