And I’m two days late in posting this even after I promised to post this on Tuesday.  Mommy FAIL.

This month Joshua has learned to crawl and cruise and he’s in to EVERYTHING.  He figured out how to get into the kitchen when I’m in there and he’s in the living room, which requires him to navigate around the recliner and not get sidetracked by the laptop cable or phone charger on the way.  That’s a hard task for him.  He loves cables.  What he really loves is chewing on cables.  I don’t love the idea of him being electrocuted so chewing on cables is a strict no-no in our house.

With his new-found love of crawling all over the place, I think he’s going to be moving up to the crawler’s room at daycare soon.  I’m a little sad about that.  I love Ms. Nancy and I love that she loves on him.  I know Ms. Kayla and/or Ms. Janet will love on him, too, but there’s just something very, well, grandmotherly about Ms. Nancy that I like.  (That can’t POSSIBLY be due to the fact that she has seven grandchildren, can it??)

He’s growing up too fast.

We have conquered the first Christmas tree with nary an ornament broken.  He has only been mildly interested in the packages underneath the tree.  He’d much rather go for the extension cord that the tree is plugged into.  (I promise my house isn’t THAT unfriendly to babies.  PROMISE.  For real.  This post is making me sound like I have all sorts of electrocution and strangulation hazards just laying around daring my child to live on the edge…)

Anyway, he’d much rather cruise the coffee table than play with the shiny things on the tree.  I’m thankful for that.

He has also learned to transfer himself from the coffee table to the loveseat or couch.  Sometimes he falls down.  Most of the time he makes the switch.  People tell me I should be scared because this means he’ll be walking soon.

Y’all, I was scared nine months ago, mmkay??  This is a challenge unlike any other.

Speaking of challenges, we still haven’t conquered naps.  As long as I’m taking my best friend, I’m okay.  When I’m off the Celexa for a day or two, I become super-neurotic mommy who is convinced her child is going to become a homicidal maniac because he didn’t nap as an infant.  Naps might be the one thing about all of parenting that always stresses me out.  Naps are GOOD for you, Joshua.  GOOD, I tell you!

We also started Joshua on yogurt this week.  Remember the dairy allergy?  It’s been really hard to have Joshua try new solids because so many foods have dairy in them.  I don’t want to overload his system by feeding him milk and cheese and butter and bread with whey in it, so I’m excited to see that he’s had no reaction to the yogurt so far.  And?  He LOVES it.  LOVES, I tell you.  I’m happy for that.  After a few days on yogurt, we’ll try some cheddar cheese.  I suspect he’ll love it because he is, after all, his father’s child. 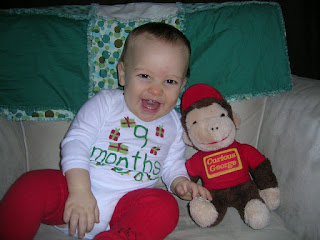 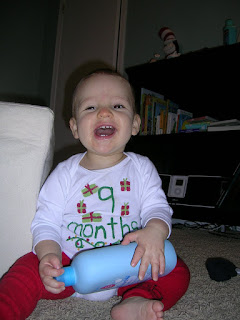 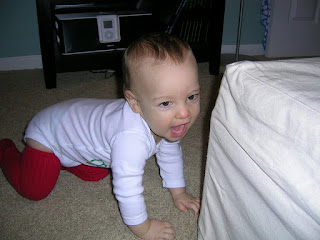