Seriously. I’d like to know how this happened. Okay, so I KNOW how it happened. What I mean is, where has the time gone? I feel like I was just walking around outside California Pizza Kitchen scrambling to get Dan out of the restaurant while not freaking him out to tell him that my water had broken and we needed to get home, ASAP.

I have a four month old.

It’s been an experience, that’s for sure. An experience that I was not entirely prepared for. (But really, what CAN prepare you for it except the experience itself?) I mean, I was ready to be a parent, but the books don’t tell you what to expect, even when the titles proclaim that they do.

Joshua has been doing so much changing just in the past couple of weeks. He has mastered rolling over and diaper changes are WAY more interesting now. When I put him on his activity mat, he flips over, and then flips out. Sometimes he seems to like being on his tummy and then sometimes he is very unhappy, very quickly.

We had his four month well-baby visit today and he’s up to 16 and a half pounds and 27 inches! He’s getting so tall! I was a little concerned about his weight gain since he’s gained so rapidly up to this point, but I’ve read that it’s normal for breastfed babies to gain rapidly early on and then taper off. She said that the two white spots I’ve been seeing on his gums that I thought couldn’t POSSIBLY be teeth are, in fact, teeth. And they are about to pop through. My boobs are crying just a little bit.

I talked with the pediatrician about how unhappy I think he is and she said “unhappy babies don’t grow. You’re doing a fantastic job.” Something about that made me feel okay somehow. I’ve really struggled over the past week or so with whether or not I’m a good mother. I don’t really feel like it. He seems so unhappy so much of the time that I think I’m not doing a good job. According to her, he’s doing beautifully, so I’m going to try and let some of my insecurities go.

And now…the moment you’ve all been waiting for…some four month pictures. We were at band camp (he did REALLY well, btw, considering he was totally out of his element for over four days) so the background is different. Everyone was totally in love with him and my mom had a great time with him. I’m really glad I was able to take him with me because I really needed to get some work done. I’m still sad I have to go back to work next week, though. Okay, okay…the pictures… 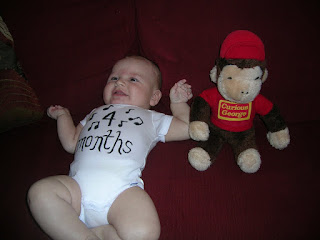 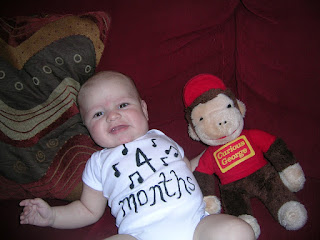 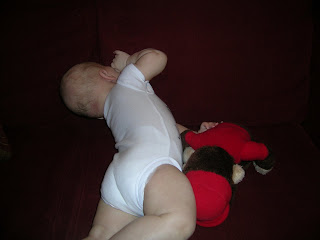 Aww he is such a little cutie and I'm sure you are an excellent mother. I think we all go through wondering if we are a good enough mother. I know I did.