[This post may be triggering for some readers. YMMV.]

It seems the media has been rife with stories of mothers who have harmed or fatally wounded their children this week. The social media narrative surrounding it all is about to make me crazy.

A mom in Texas shot her daughters during a “family meeting” because of, presumably, problems in her marriage. She was later shot by police. Most people who knew her and commented after the fact called her “unstable.”

On Friday, a mother in Tennessee killed four of her five children, all under age 6. Her youngest child was 6 months old. She’s in custody and has been charged with four counts of First Degree murder, a charge which carries the death penalty in Tennessee.

The sheriff in Shelby County called this unspeakable tragedy “an egregious act of evil” and commented that this is something the community is not likely to soon forget.

The rest of the Internet called it–and her–this: 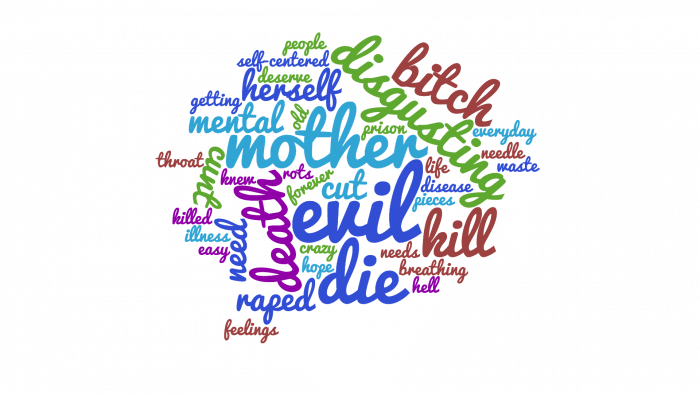 I call it postpartum psychosis.

This mother is 29. She had 5 children ranging in ages from 6 months to 7 years. She has been pregnant more often than she hasn’t since having her first child. Her risk factors for a postpartum mood disorder are HIGH, and that’s without even having the entire picture of her life.

But postpartum psychosis isn’t even the full reason for this post since, at this point, it’s only speculation as to whether or not she suffered from the illness. There are myriad reasons why she may have killed her children and we know none of them yet.

I want to talk about the media narrative of moms who commit these crimes, especially the social media narrative. (And yes, they’re crimes. Mental illness might be an explanation or a causative factor, but it’s not an excuse.)

Take a look at the word cloud again.

Look at the words used to describe this woman: self-centered, cunt, evil, bitch, disgusting, and because this is a word cloud and I was in a hurry, I couldn’t figure out how to keep phrases together.

Phrases like: “She should kill herself” and “I hope she’s raped every day in prison” and “Someone should cut her throat” and “She deserves to die” and “I’m tired of this mental illness bullshit.”

That? Those words? Those words are full of anger, misogyny, hate, ignorance, blame, and, quite frankly, they disgust me while splintering my heart into shards.

The social media narrative of this woman’s life, a woman whom NONE of these people has ever met, is growing within me a desire to swear off the Internet completely because, wow.

It’s like society is slowly (or quickly) becoming that gang of kids in Fahrenheit 451 who murder an innocent bystander just to see what happens when someone dies. The ones Clarice wants nothing to do with because she still has a soul.

Instead of providing opportunities for people to come together and rally around causes and situations and people and ideas they neither know nor understand, social media is robbing people of empathy and sometimes the weight of all the hate and confusion and lack of kindness just crushes me until I want to bury my head under the covers and never, ever leave my bed again.

For all of the ways in which the Internet has enriched my life personally, for all of the relationships and opportunities it’s brought into my life, it seems it’s done a lot more harm than good to so many other people.

“But Miranda,” you say, “just don’t read the comments!”

Well, okay, that’s great and all, but when the Sheriff pre-judges a situation as an “egregious act of evil” and shares THAT with the news, evil becomes the soundbyte and mental illness its synonym, and as someone who lives with a mental illness, I’d like my anxiety not to be used against me someday.

Mentally ill people are not evil. The vast, VAST majority of those of us living with mental illness hurt no one, and when or if we do hurt someone, we’re far more likely to hurt ourselves than anyone else.

Mothers do not just wake up in the morning and decide to kill their babies. They don’t just look over at those lives and go “time’s up, kid” and I find myself time and again shouting into a void that this is not how it works. That’s not how any of this works!

Rational, healthy, whole people do not just decide to kill…ANYONE. And why the media can’t run with THAT as the headline I’ll never know.

There’s an opportunity and a responsibility for those of us who understand mental illness, or who are at least empathetic to the plight of the mentally ill, to educate those around us about the harm done by the social media narrative when tragic events like this one occur.

And I know, we’re out here. We’re doing the work. There’s an army of moms and dads and HUMANS WITH EMPATHY out here fighting alongside me.

But today, this weekend, it feels like not enough. The weight of those words up there have slammed right into me and it just feels like all of my efforts have fallen short.

As far as we’ve come when talking about mental illness, we still have a long, long way to go.

Regarding "On Friday, a mother in Tennessee killed four of her five children, all under age 6. Her youngest child was 6 months old. She’s in custody and has been charged with four counts of First Degree murder, a charge which carries the death penalty in Tennessee."

honestly luv.. i do not think she should be rqped, or any of that ... i think she should get the electric chair. i understand mental illness, as much as the next. i myself am bi polar however, just because i am depressed, and bi polar, it doesn't give me a get out of jail free card. i also suffered by PPD over 5 years after my youngest was born.. but, does that mean, i could have killed them and then said, oops, i was sad? no. what those people said, was off the charts ignorant, sure.. however, murder, is murder. she purposely killed her children. she knew she was unwell, she should have sought out help. if one person ignores her, and it gets worse, keep asking. don't kill your children. the memes that are popping up are wrong. however, she needs to be punished. 1, maybe 2 children, that i can see as mental illness, jail and therapy... not that i accept that, i still think death penalty however, i suppose it could be explained by illness.. however, 5 !!!!!? i am sorry but, no! she will pay for that. call me a monster, call me a bitch.. i do not care. my heart is with those lost souls.. I stand behind texas on this one... hell, i use to be against the death penalty.. then i grew up and saw the world for what it is. and i wish i had never grown up.

I'm proud of you and what you stand for, for these ladies hurting with this illness. Hopefully one day soon, it will be recognized for what it is and help can be gotten for them.