We were walking through Target one afternoon last week, before Brock Turner and his victim’s statement became trending topics. Emma was being kind of rambunctious, chasing her brother in and out of the clothing racks in the children’s department. He wasn’t feeling great.

He’d finally had enough of her playing.

“No means no, Emma! Stop it.” He continued walking and she stopped chasing him, returning instead to walk by me, her haze of fun broken by her brother’s command. I smiled because he’s been listening. Praise be, I’m getting something right! 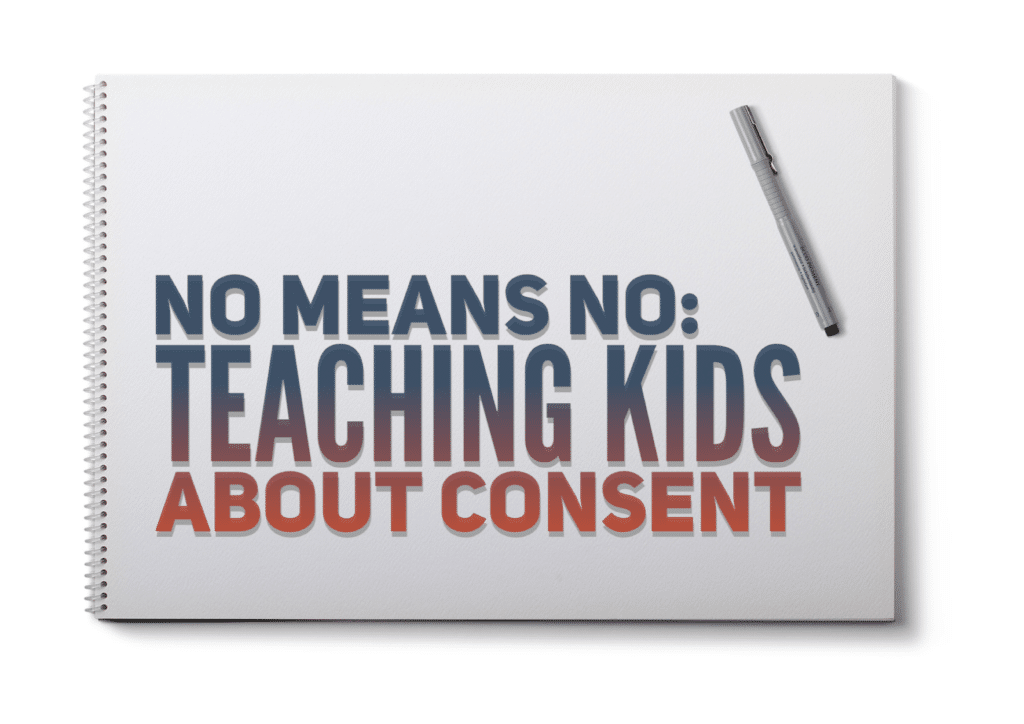 If we’re going to teach our kids about consent, we have to start early, and it starts as simply as teaching them that no means no and respecting them when doing so presents no danger.

I distinctly remember sitting in a church youth service and hearing the minister on the stage talk to the girls in the audience about guarding their modesty and not wearing things that might lead the young men we may be dating to get “the wrong idea.” He said exactly zero words to the boys. No lie.

The message was clear: Girls are responsible for the sexual promiscuity of boys, both in thoughts and in actions. Boys can’t help it. In that moment, at 15 years old, I remember feeling 1) shamed 2) confused 3) outraged.

What happened to saying no? Why wasn’t that an option? Why was I responsible for where his eyes went and what his brain thought about?

I didn’t yet know what it meant to be a feminist and I definitely didn’t understand patriarchy and rape culture. But I knew in the very core of myself that if a boy had sexual thoughts or took advantage of a girl, it wasn’t the girl’s fault and I made a decision at 15 years old.

I will not raise a son who doesn’t understand consent and the meaning of the word “no.” I will not teach my son that his actions or thoughts are someone else’s fault, or that his whims and desires are more important than anyone else’s. I will teach my son, just like I will teach my daughter, that his body is his own and he has the final say about what happens with and to it.

In the wake of Brock Turner’s conviction and subsequent slap on the wrist for the digital rape of an unconscious woman behind a dumpster in January of 2015, I see parents talking about teaching their kids about consent. We HAVE TO do this.

No means no. Stop means stop. Their bodies, their choice.

When something is happening that they don’t like, they get to put a stop to it—even if they have previously consented to the activity—and if we teach them this early and often, this is a lesson that will stick with them as they’re spending more and more time out of our presence.

And, lo and behold, it will become reciprocal in their minds.

When Joshua said “no means no” to Emma in the middle of Target, I gave myself a little internal fist bump because something I’m saying to him as a parent is sinking in. It’s working. He’s listening.

Furthermore, her reaction showed me that she’s listening too. She stopped what she was doing. She didn’t continue because “no” really means “yes” and surely Joshua didn’t really mean it. He’s had fun horsing around in the store before! This time is no different!

“But Miranda,” you ask, “what if my kid says no to taking a bath? Or brushing his teeth!? Or combing her hair!?”

Dear parent, use your common sense, okay? There’s teaching our kids about good personal hygiene and there’s teaching them that NO ONE gets to touch them in a way they don’t like. No one.

Not Great Aunt Ethel and her sloppy kisses or cheek pinches. Not strangers in the store. Not boyfriends or girlfriends or teachers or friends. NO. ONE.

Emma’s hitting her brother because she’s 4 and irrational and sometimes a little nuts when she wants attention, or whining and begging and climbing all over him to get him to play?

He’s trying to climb on me in the pool because there are no other kids his age and he wants me to play but he’s almost undressing me and also it hurts to have him climb on me and I don’t like it?

I get to say no, and not just because I’m his mother. It’s an invasion of my personal space and sense of self and I don’t like it.

Emma also gets to say no, but she’s 4 and so she says no to A LOT right now. The examples I could give would be myriad and also slightly off-topic.

But I give her a wide berth in saying no because I want her to assert that tiny voice of hers and use it to shout to the world that she WILL NOT STAND FOR THAT.

If it seems too simple, it’s because teaching children about consent IS simple. It’s easy to start the conversation by talking to our kids about consent in ways they understand. But beyond that, it’s something we have to do.

We cannot go on disbelieving every woman who reports her sexual assault because “what will become of the poor boy” in the situation.

We cannot continue to dismiss the actions of boys like Brock Turner as something boys will do simply because they have a Y chromosome. (Remember. Boys will be boys, loosely translated, means boys will be assholes.)

But those are bigger conversations for further down the line. But not too far, because the earlier we start talking, the more engrained the message becomes.

“No means no” isn’t the last mantra we’ll ever utter. “Stop means stop” isn’t the be all and end all of a conversation about consent. It’s the beginning of a lifetime of conversations where I do my job as a parent to teach my children that they are the final authorities on themselves and their bodies and no one gets to take that away from them.

No means no. It’s that simple.

I agree wholeheartedly. As I mentioned here, teaching "no means no" is merely the beginning of the conversation about consent. It's how we choose to teach consent to our children in measured ways which can be built upon with age appropriate discussions. For good or ill, "no" is one of the first words many kids learn, so starting the conversation there has always felt natural to us.

I'd just amend that it's just as important for boys to know they can say "no means no" as well.

Yep. That's in here. The anecdotes are primarily about times Joshua has said "no means no, Emma" and she's listened. He's getting it and that will be reciprocal in his interactions with others.