A pack of boys ranging in age from 6 to 12 march together in a line. They’re all wearing similar colors, mostly camouflage, hats, shirts, all of it designed to make them appear as part of the same group.

Some of them carry Airsoft guns, others Nerf. Brightly colored blue and orange plastic designed to look over the top and not threatening, but still, guns.

They build forts behind houses. They cross the creek and climb trees.

They call themselves the neighborhood’s protectors and roam freely through the woods surrounding our subdivision, never being stopped and questioned by curious homeowners.

People laugh at the juvenile simplicity of their game which seems to be a throwback to those long ago days when kids played until sunset and had to be called in by moms shouting from porches into the streets, rounding up children for supper or bed. (Now we send text messages, but the idea is the same.)

“There they go again with their game! Ha Ha Ha! Isn’t it great how well they play together? They’re such sweet kids.”

And they are sweet kids. But.

To say that the decision not to indict the officer who opened fire on 12 year old Tamir Rice mere seconds after arriving on the scene and before the vehicle in which he rode had even come to a complete stop is a miscarriage of justice is the very definition of understatement.

There is no planet on which anyone will ever convince me that the officer’s actions were justified. Don’t bother trying. It won’t happen.

Samara Rice buried her son–a CHILD–who was left to bleed in the streets for FOUR MINUTES before anyone was allowed to administer any help at all and while my mother’s heart cannot begin to fathom her pain, I rage inside for the loss she’s suffered at the hands of a man who swore an oath to protect and serve.

All because her 12 year old son was Black in public.

If the boys roaming my neighborhood were Black or Hispanic or any other minority under the sun, they wouldn’t be looked at as cute and endearing.

They would be considered “threatening,” a “gang,” maybe labeled “thugs,” menaces to our peaceful suburban way of life.

This is white privilege.

Tamir Rice didn’t even have to be among a group of peers to be considered dangerous, but how much worse would this tragedy be if he had been? How many more boys would have been buried if he’d been among friends?

One lone boy in a park with what was reported to be a toy gun was enough to “scare” the officer who shot him. That we even have to consider the fact that it “could’ve been worse” and that there “could’ve been more dead children” makes me sick.

One is too many.

Now that white officer will never see the inside of a cell as a prisoner instead of a jailer because his actions have been deemed above reproach by a Grand Jury and a prosecutor who would have us believe that the Supreme Court says there’s no room for questioning the actions of police, as if they’re appointed judge, jury, and executioner upon pinning on their badges. An SS force similar to that of Nazi Germany in World War II.

That Officer Loehmann never should’ve been hired by the Cleveland police department is an issue, but it isn’t even the biggest issue. I mean, it is. The standards to which we uphold our officers must be revamped, uniform, and decidedly less militaristic, but every occupation has those who shouldn’t be working in that field for one reason or another.

There are no doubt countless officers on countless forces who probably shouldn’t be police officers. The difference is that they don’t go around shooting unarmed children in broad daylight.

That large portions of White America can’t ask “how could this happen?” and “what if that were my child?” is the problem.

Wake up. Do better. Ask yourself if you want to live in a world where children of ANY color are gunned down in the park for playing with their toys?

The toy Tamir Rice had on him, not pointed at police or squirrels, or any living, breathing creature at all, was just that. A toy. No different than the ones the boys in my neighborhood play with all the time.

But again, they’re white boys. And Tamir Rice was Black.

It’s been 400 days since Tamir Rice was shot. Reading that number shook me. It feels like it’s only been 40 days. Or 4.

The shootings of unarmed Black people, children and adults alike, are so commonplace, they occur so frequently, that they bleed together in our collective memories and media cycles.

How sad is that?

What’s plaguing me right now is fatigue, and if I’m fatigued, if my heart is continually shattered over this, how must the hearts of mothers of color feel?

I can’t begin to imagine, but I’m trying. 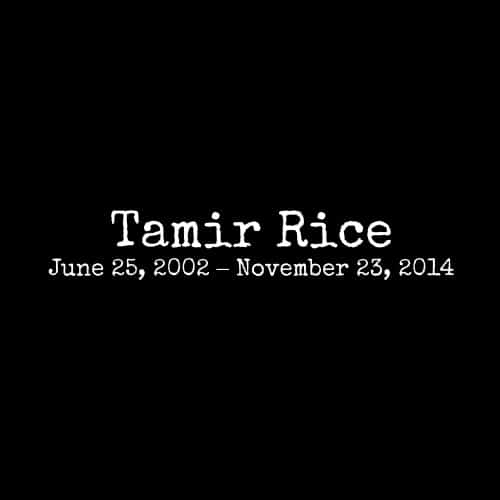