Joshua turning five was a big deal, for me and for him. He will proudly tell anyone who will listen that he’s five years old, spreading out each of the fingers on his right hand and waving his open palm at them, as if they can’t possibly know what he means without the visual aid.

I, meanwhile, cry a little on the inside every time he says it, willing time to slow down. So time does what it does and speeds up.

When he climbed into the car after school, I saw that the tooth, which we knew was loose, was practically laying sideways in his mouth.

Joshua, this is a really wiggly tooth. It’s ready to come out, just barely hanging on.

And then I touched it and there it was, in the palm of my hand. Joshua was shocked, gladly exclaimed that the Tooth Fairy would be making a visit, and then began to cry. Big crocodile tears streamed out from behind his Spider-man sunglasses. I wiped them away with my thumbs, telling him everything would be okay.

He didn’t really understand that a loose tooth meant the thing would fall out of his mouth and be gone. No amount of promising that a newer, bigger tooth would grow in its place made a difference.

That tooth wasn’t this tooth. No other tooth would do.

I sat there wondering how it is we’re supposed to explain these unknown events like this to kids who can’t quite understand what we’re saying, to kids like my Joshua who are so resistant to changes like this, and why some things, like growing up, are sometimes so hard for all of us, parents and children, to grasp.

Eventually he calmed down, became a little excited even, and asked to wave down one of his teachers who had exited the building while we waited so he could show her his new grin. There’s a little whistle when he talks right now, and occasionally I see him sticking his tongue into the gap in his smile, feeling the unfamiliar space there, unable to tell me just what it is he’s thinking when he does so, but I know it’s something like uncertainty and excitement with a dash of fear mixe in.

I know that because it’s what I’m feeling, too.

If I needed any sort of visual aid that my boy is actually, truly, quickly growing up right before my very eyes, the little gap in his smile is doing the trick. The last vestiges of his babyhood are peacing out.

I keep looking forward while occasionally stopping to glance back and if I squint my eyes when looking in either direction, I can see both our past and his future. This was one of the first of twenty (and then some) moments that are hastening us toward the rest of our tomorrows.

I’m not quite sure I’m ready, but whether I’m ready or not, life is marching on. I’m just doing my best to embrace it. 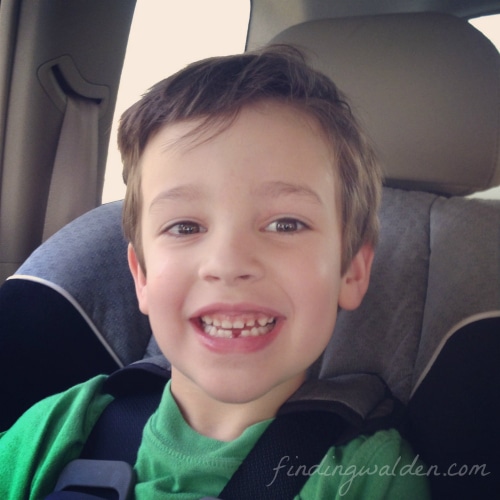 He looks so handsome!!