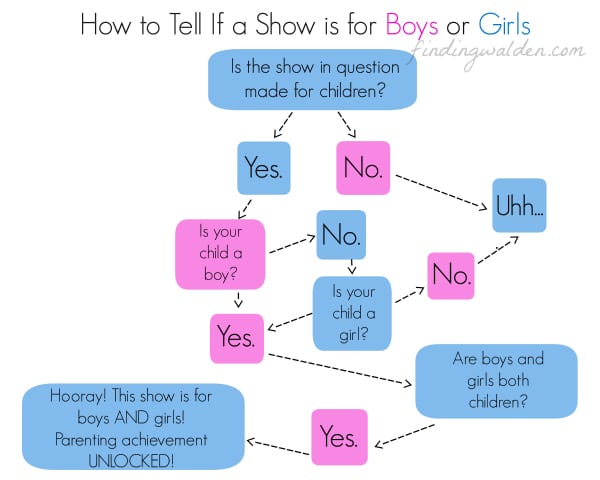 I let my son watch “girl” shows. I’m not ashamed to admit that at all.

I don’t subscribe to the notion that television shows are made for girls OR for boys. If a television show is made for KIDS it’s made for boys AND girls, regardless as to whether there are flying ponies or men in tights on the screen.

Yes, I realize that whether or not children SHOULD watch television is an argument we could be having. But that’s not what this is about. This is about parents who’ve decided that television isn’t the devil and moderation etc. If you don’t let your kids watch TV at all, cool. Promise. But I hope you can understand the point I’m trying to make that categorically eliminating something because of your perceived notions of gender roles is silly.

I wasn’t allowed to watch The Simpsons growing up because Mama felt like Bart was a brat, so I get that each household has to make their own rules about what shows–if any–are allowed in their house. But a dearth of opportunities for quality children’s programming are missed when entire segments of the guide are wiped off the slate simply because the main characters wear dresses and tiaras instead of masks and capes.

Quite frankly, a lot of the “my son won’t watch ‘girl’s’ shows” seems crazy insecure and overly scared about…what? A boy being nurturing instead of rough and rowdy? Wanting to get in the kitchen and whip up something tasty instead of tossing around a pigskin?

So what if he DOES like to cook? Aren’t there men out there who are masters in the kitchen AND who enjoy watching football? Is being able to make dinner (or clean, or be kind, or be a good friend) inherently a feminine skill which men do not need to be successful humans?

No. Both men and women–boys and girls–need ALL of those things.

Do I think that Joshua’s penchant for watching My Little Pony is an indicator of his future sexuality? Not at all. Do I care either way? Not at all.

I think I brought back some swag from a conference and he thought it was cool, saw the same characters in the Netflix queue, asked to check it out, and found a kindred spirit in Pinkie Pie, who is funny, fearless, and friendly.

We binge watched a few episodes and then he asked to play Angry Birds Star Wars and we pretended to have light saber fights with his Telepods before falling into a heap of wrestling and tickles in the living room floor.

I do not care who or what my children become so long as they are kind, caring, generous, and fair, with a dash of strength and courage mixed in, all traits of good men and women. I will love them no matter what and I will fight to the death to see that they are protected and have a place in this world where they feel safe and free to be whomever they will one day be.

Isn’t that what parenting is about?

Letting your boy watch a show you feel is made for girls will not change who your boy is any more than your girl will become capable of leaping tall buildings in a single bound if she happens to watch Superman.

But I’ll bet Emma could totally rock the cape and tights.

Edit: After reading a few genuinely helpful comments about the flow chart included with this post, I feel compelled to apologize if any parents of transgendered or gender-nonconforming children felt I was being disparaging and/or non-inclusive with my use of “Uhhh…” I assure you, no harm or insult was meant. Hopefully, from reading the post, it’s clear that I believe that ALL children, regardless of anything deserve the freedom to explore their worlds and decide for themselves who they’ll be on their own terms.

[…] Check out this post from Miranda at Finding Walden: How to Tell If a Show is for Boys or Girls […]

Stop It With the Victim Blaming. - Finding Walden

[…] when I wrote that little post about How to Tell if a Kid’s Show is for Boys or Girls? Let’s expound upon that a little, shall […]

Boys are boys, girls are girls, but, KIDS ARE KIDS! I grew up as a "Tom boy" per say, but I am totally a girl. You know, it doesn't matter what gender we are, only that we are human, and have someone that loves us. I come from a family that has a special situation, but you know what? I love my sister more than any one will ever know. I will not expunge on the situation but just know that love has NO boundaries.!

[…] it’s okay to cry. I will teach her that boys and girls are all children and there’s no right or wrong way to be a boy or a girl. I will teach […]

Love this :) I don't have kids, however I remember one time when I was a kid, my cousins were styaing with us. My male cousin was picking on me because I was playing with a dump truck and RC car (I was older than him, but that didn't seem to bother him at all!) I never saw a problem with playing with my cars, trucks, playing cricket or watching the likes of He-Man and similar TV shows back then! I also had plenty of Barbies (original barbie of course!), dolls, teddies and could go from playing a game involving cars & trucks to dressing up dolls and having tea parties all in one sitting! It certainly didn't do me any harm, so I'll let me kids choose what they play with and what they watch :)