It’s been 9 weeks since I wrote about my goal to mail 31 letters in 31 weeks. After today’s batch of letters make it into the mail box, I’ll be a week ahead of the game. I’ve gone in spurts mailing several letters at a time, but I’m still letter-for-week on the campaign.

Part of my success in sticking with this is because this has been fun and awesome. Part of it is because I have beautiful stationery that makes me want to sit down and write. 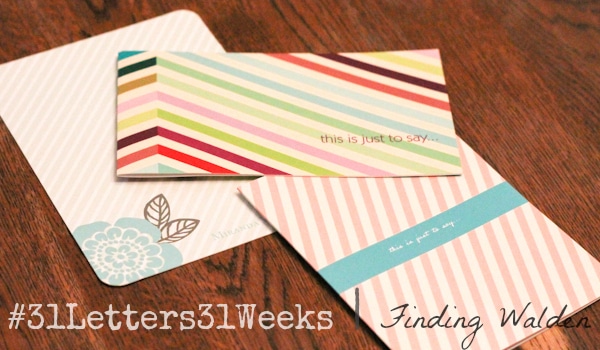 Three brand new, beautiful sets of stationery so that I can write my little heart out to the people on my list.

Since #31Letters31Weeks is about dropping a short note in the mail, I took a little inspiration from William Carlos Williams in order to personalize my Pear Tree stationery.

I have eaten
the plums
that were in
the icebox

and which
you were probably
saving
for breakfast

forgive me
they were delicious
so sweet
so cold 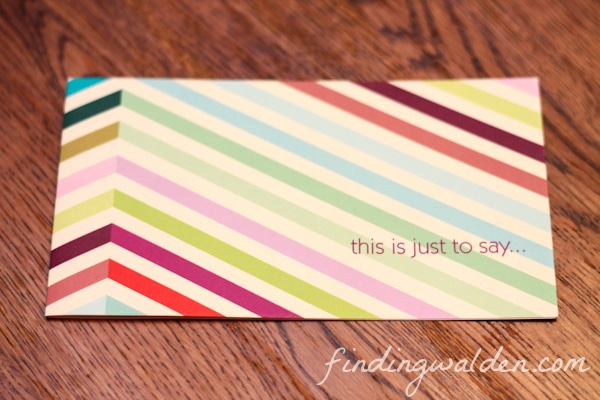 I knew I wanted the Chic Chevron stationery as soon as I saw it. It was bright and cheery and perfect. Ink color could be coordinated!! (It’s the little things these days, people!)

William Carlos Williams titled his poem “This Is Just To Say” and that unspoken line speaks volumes about our communications.

When we sit down to write, we don’t have to write novels. Letting people know we’re thinking of them is as simple and easy as a short little note.

But when I need to send a longer note, I have the Angled Effects Stripes cards to help me do that. 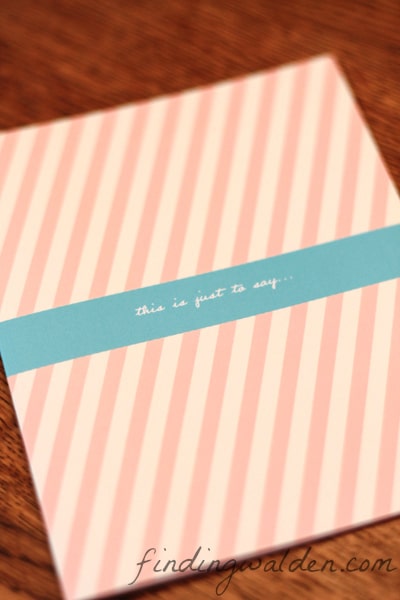 The Angled Effects note card seems simple enough, right? It packs a visual punch! The stripe across the middle comes in 70 different colors and the font is customizable as well.

After playing around with a dozen or so colors, I went with blue and pink because, well, I wanted to. That’s what personalization is really all about, right? Getting what you want? Making the product your own?

For my final set, I chose a flat note card and had it printed with my name. I thought about sending professional notes and how awesome it would have been to have personalized stationery to send Attaboys home to parents when I was teaching and decided on the From Stripes To Flowers note card. 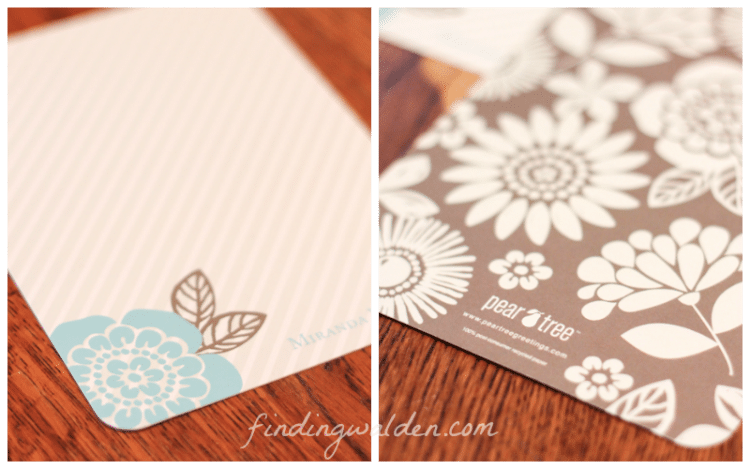 Isn’t this just beautiful? I changed nothing about it even though the card is customizable. I fell in love with the blue and gray upon seeing it and added it to my cart. Then I checked out and saw that there are matching address labels and almost went back in and bought those, too.

It will make me sound like a total nutcake, but sometimes I open my stationery box and just look at these. They’re just so pretty!! And the quality of these, both the color and cardstock, is better than just about any piece of stationery I’ve ever used before.

I’ve been excited to send these to people and that has helped make #31Letters31Weeks work for me. How’s it working out for you?

Want to know more about #31Letters31Weeks and how you can participate? Read the “guidelines” here.

Pear Tree Greetings provided me with a credit to choose my own stationery.
The box which arrived on my doorstep a week later was opinion-free.