So, Emma turned 1, right? I know. I’m trying to pretend it didn’t happen, too.

Except it did happen. And we threw her a party. A Pretty Pink Party. 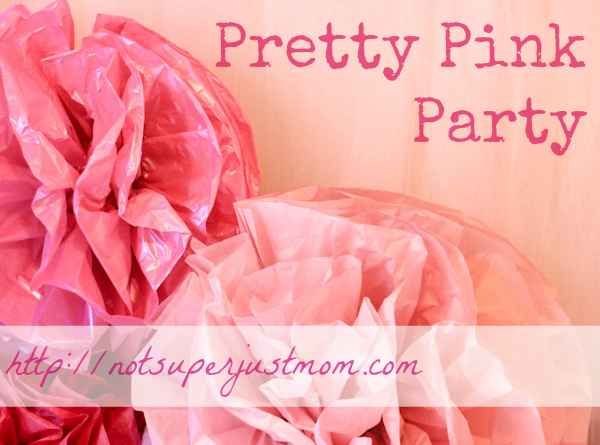 The inspiration for a pink birthday party came from a skirt I bought her on a swap page. It was so delicate and this amazing shade of light pink. So, I decided that pink would be the theme for her first birthday party while she’s still little and doesn’t have an opinion. (At least not an opinion about color.)

I like the color pink. One day she may hate it. I’ve got to use it while I can, right? And isn’t this skirt just amazing? 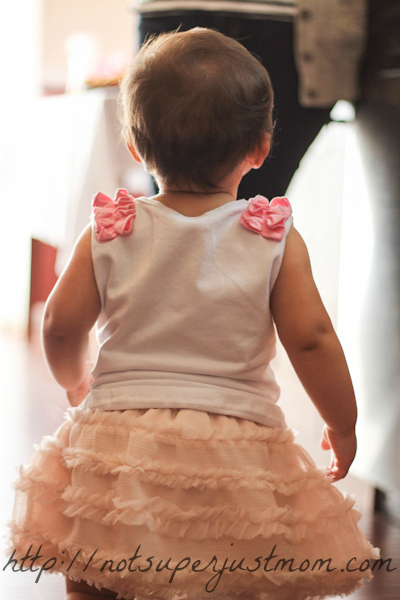 I knew I wanted the party to be girly and fun, so I turned to the internet for more ideas and, once again, used the invitation to set the tone. 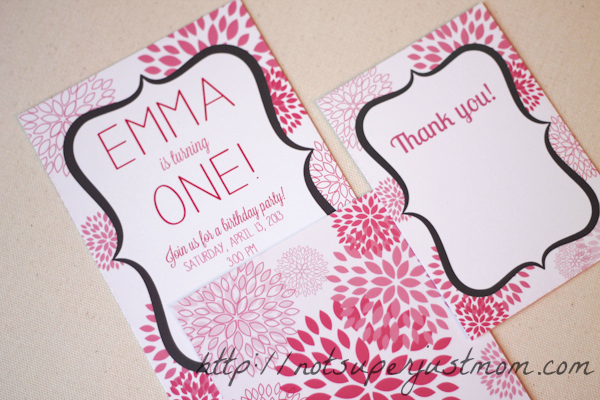 Brooke at Graham Cracker Designs was my go-to girl once again. I threw out some ideas and said “pink” and she came back with this. A few tweaks of the font and we were ready to rock. I took the invite, added an overlay in PicMonkey to cover the invitation wording, and then typed in the words “Thank you” to create her first stationery. (That’s why the fonts don’t match.)

Then Zazzle printed them up and I mailed them out.

Next came the decorations. Tissue poms and lots and lots of tulle. Lots of tulle. So much tulle I can make tutus until she’s dancing in a recital in high school probably. 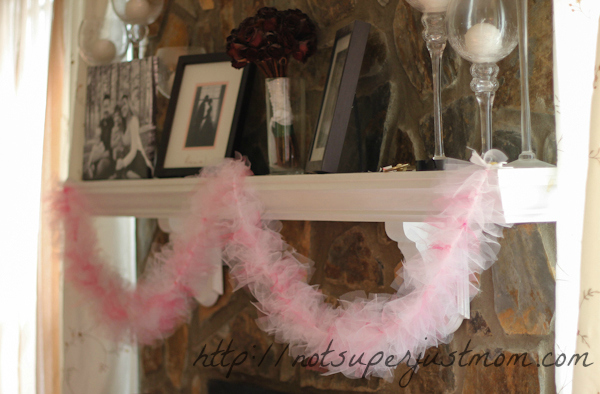 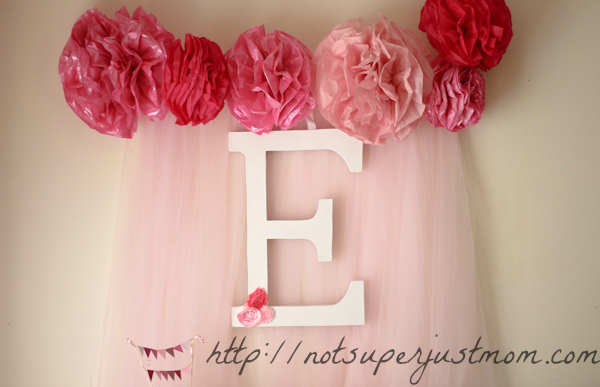 I also bought a bolt of tulle (on Amazon for $16. An entire bolt!) and several packs of tissue paper to create the backdrop for the table.

The giant letter E came from JoAnn. I painted it white with acrylic craft paint and then used glue dots to affix the tiny pink flowers which also came from The Hairbow Company.

I tried tissue poms once before, for one of Joshua’s birthdays, and they turned into giant, floppy messes. This time I figured out that cutting the sheets of paper in half
and using 8 layers helped give the pom more stability. For the larger poms, accordion folding along the shorter edge also helped. (That was my mistake the first time–folding along the long edge.)

I’m so happy with how these turned out they’re going to be repurposed as decor in her still unfinished bedroom, along with the E, and maybe the tulle backdrop, too. 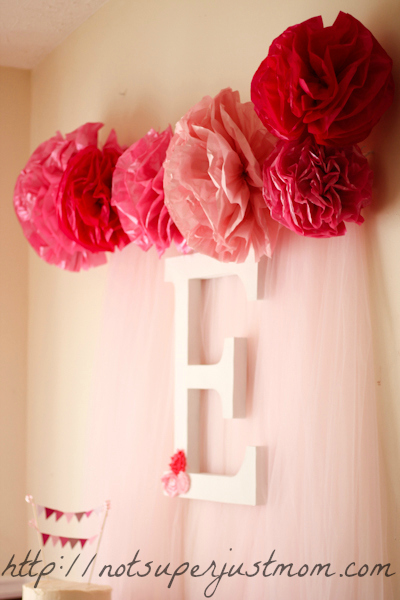 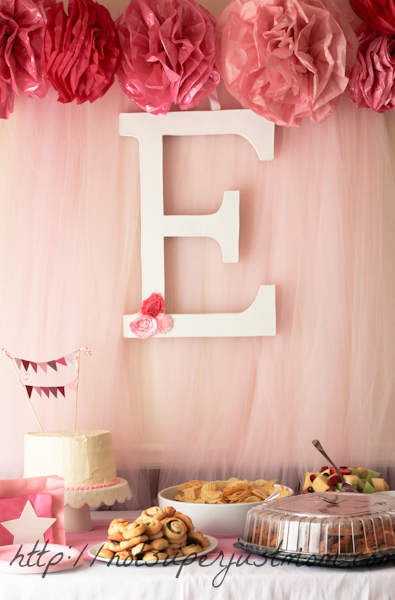 I used strips of the 6″ tulle to make a table runner and used white tablecloths from my stash. They aren’t sewn together or glued down or anything. Just draped across the table.

I briefly toyed with the idea of trying to make all the party foods pink and then decided that would mean lots of cookies and not much in the way of actual food, so we just kept it simple instead. 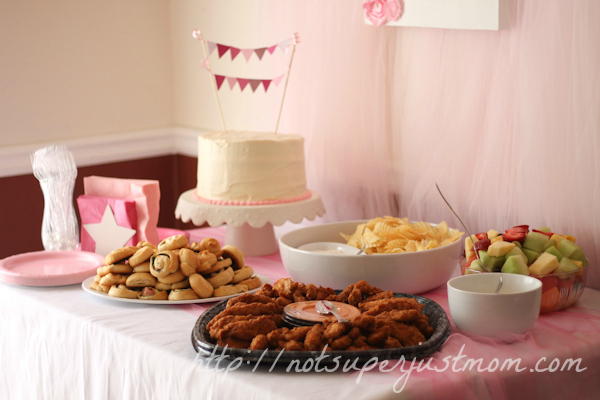 A chicken finger platter, a cut fruit bowl from the grocery store with some fruit dip, chips and dip, and ham and spinach pinwheels.

Open a package of crescent rolls and separate into sections of two triangles (to form a rectangle). Pinch together at the perforated seam. Spread with herb and cheese spread (like Rondelle), layer with baby spinach leaves and deli ham. Roll up and pinch dough together on the outside. Slice and then bake according to directions on the crescent roll packaging or until golden brown.

Emma approved. But she doesn’t really say no to food, so. 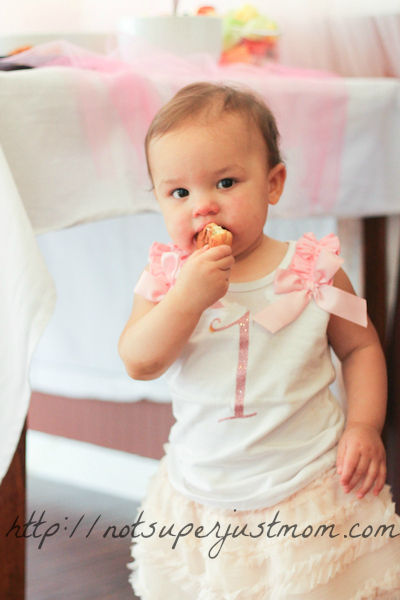 Her adorable little 1st birthday shirt came from The Hairbow Company. (I bought the shirt, and after having worked together before, they provided some of the flowers used on the big E.)

Now for the cake.

I didn’t want to make more fondant and just used a store-bought cream cheese frosting. Making my own frosting is my nemesis so far, and I’m determined to conquer it. I just didn’t set out to conquer it that weekend. 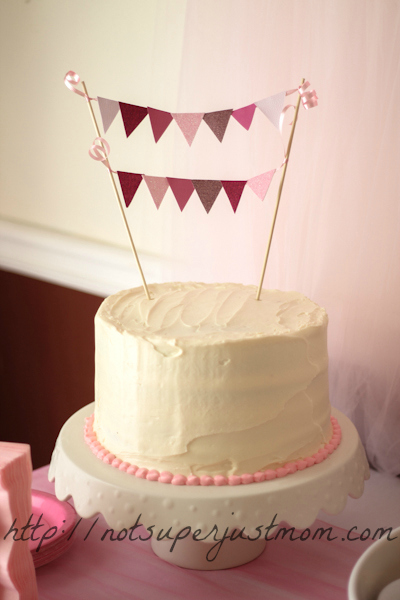 The cake was yellow cake with a strawberry cream cheese filling (that didn’t exactly fill and instead turned into kind of a runny mess but tasted good). One day when I master homemade frosting I will buy the correct tools to get a really super smooth cake. Until then, imperfect will do.

I made the pennant banner by cutting triangles from pieces of pink scrapbook paper and using glue dots to affix them to some curling ribbon I tied around bamboo skewers. Easy. 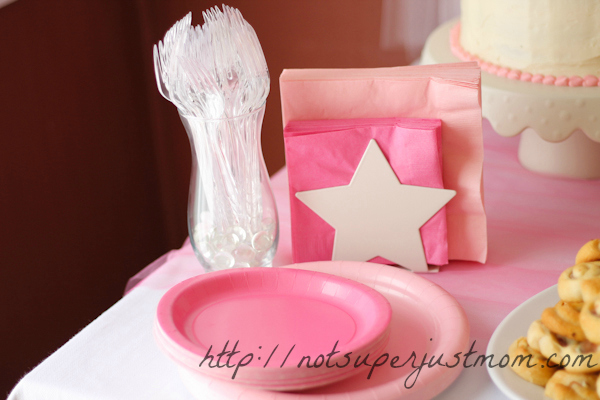 Pink party supplies came from Target and the Dollar Tree. No sense in spending a ton of money on the plates. 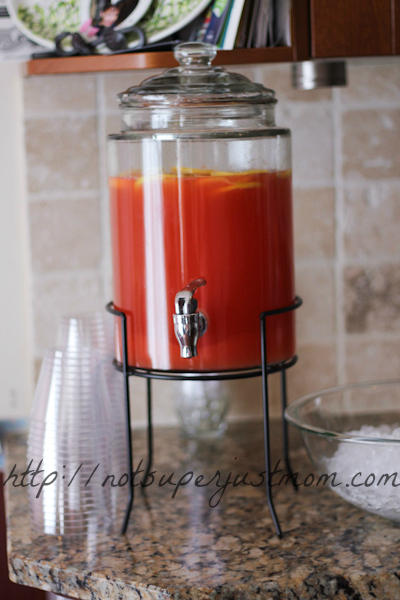 This punch was a hit. Dan mixed it up and added: 2 cans of pink lemonade concentrate, 1 can of pineapple juice, 64 oz. pre-made fruit punch, 2 L ginger ale, and sliced lemons for garnish. The dispenser was a TJ Maxx find! 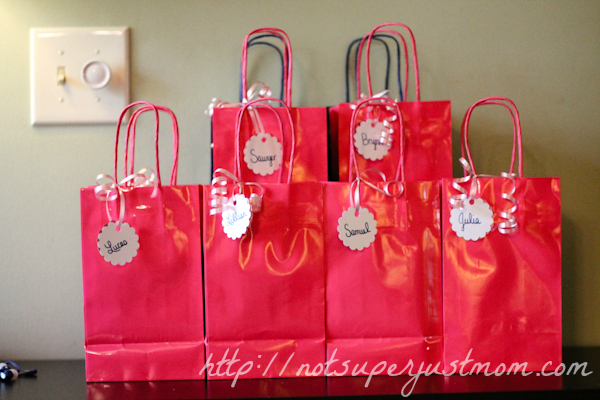 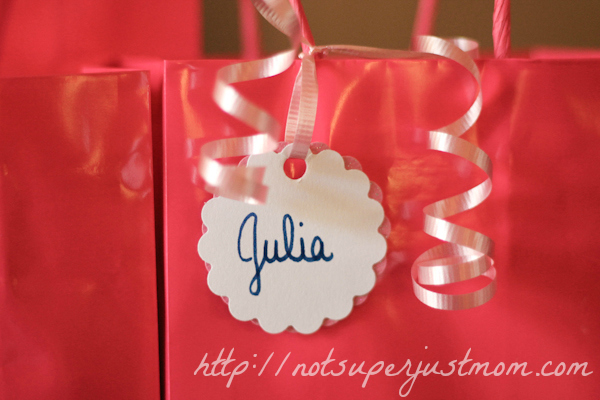 Goodie bags contained items from the Dollar Spot at Target: a 4-pack of sidewalk chalk, a coloring roll, and a pack of cards. Flashcards for the littles and games like Old Maid, Go Fish, and Crazy 8s for the older kids.

And that’s that. Emma’s 1st birthday party was a pretty pink party!

Here are some extra cute photos of my kid for making it this far: 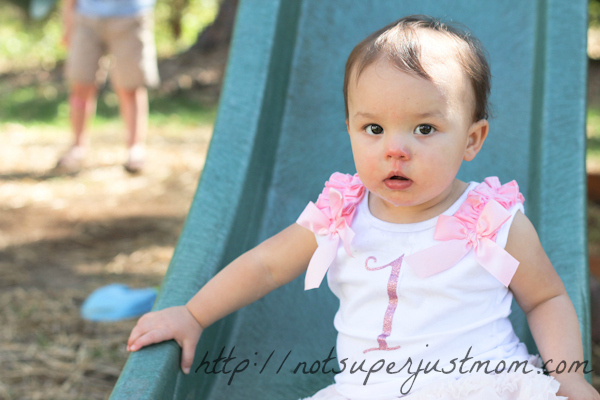 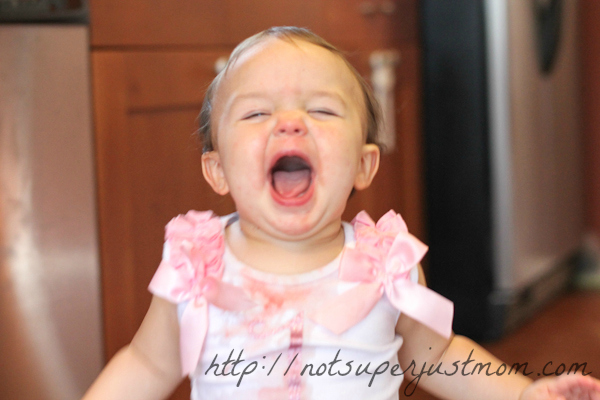 I have another question for you.....can you please tell me how the tulle, pom poms and letter was hung (Emma's Pretty in Pink). I am using this idea but wasn't sure how to hang it safely. Thanks for all you help!

Hi! I used tiny little hooks that screw into the wall and tied a piece of ribbon from hook to hook. Then I draped the tulle over the ribbon. I glued a piece of ribbon on the back of the big E and put a hook in the wall for that, too. The poms are hanging from the ceiling with glue dots (placed over the fishing line and directly onto the ceiling. Some of them kept falling, though, so my husband tied the fishing line around the pin on a clear pushpin and put the pushpin in the ceiling.

Please tell me what type of paper you used for your pompoms. They have the look of plastic table cloths in the pictures. We are planning my granddaughter's 1st birthday and looking for ideas! Thanks! your site is wonderful!

Hey! I used tissue paper from Target. Some of it is shiny on one side and flat on the other. All of it feels heavier than the usual tissue paper. But all of it definitely came from Target. Hope this helps!

This internet site is great. When I including it all.

Seriously cute! Love it! And Emma is just adorable. I made the BEST icing for Jackson's 2nd birthday. I think it is on one of my Pinterest boards. The perfect cake is still a work in progress. I need to know about this swap website you found the skirt on!