Remember that time I said we live in a really cool place and there are lots of things to do here so we should do more of them?

About a month ago there was a Groupon for two adult tickets to Zoo Atlanta for the price of one. It was good through the end of this year, so I snatched up one of those bad boys without thinking twice and then said “Hey, Dan! Zoo, yes? P.S. This isn’t exactly a question! LOVE YOU!”

Joshua was slightly nightmarish this weekend. (Three’s not my favorite.) But since the temperature dropped yesterday, we decided it was as good a day as any to attempt what would potentially be a disaster.

Armed with snacks, a stroller, the OnyaBaby, and the camera, we set out, first stopping at Sublime Doughnuts for, well, doughnuts. And then we hit the zoo.

Because it was early, it wasn’t crowded or  hot, which was really nice. I highly recommend getting there early if you’re planning a trip. Plus, we were able to park in the zoo’s parking lot (free parking) instead of down the street in an overflow lot and hoofing it in.

The elephants weren’t in their enclosure, which made me sad. I love elephants. I loved the pandas, though. And the gorillas. And many of the animals were sleeping or just sunning themselves. Joshua was only partially amused by the animals (probably because they just stand there and he expects to be entertained) so he was kind of a handful until we got to the KidZone and then he thought the zoo was the greatest place on Earth because there was a bounce house, a carousel, a train, and a playground.

Once we got over the meltdowns and he spent some time in the stroller for running away from us (!!!!!!!!!!), we had a good day.

Now comes the part where I assault you with photo proof of our trip to the zoo. You’ve been warned. 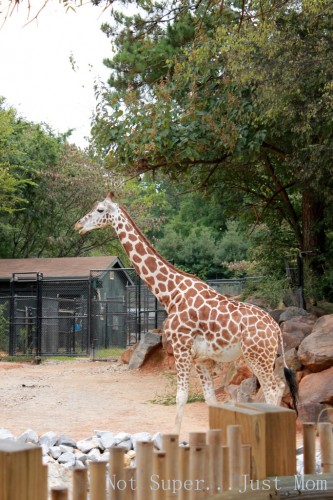 Giraffes are such bizarre animals, don't you think?

Here’s something I learned about giraffes: Giraffes are pregnant for 17 months. O_O 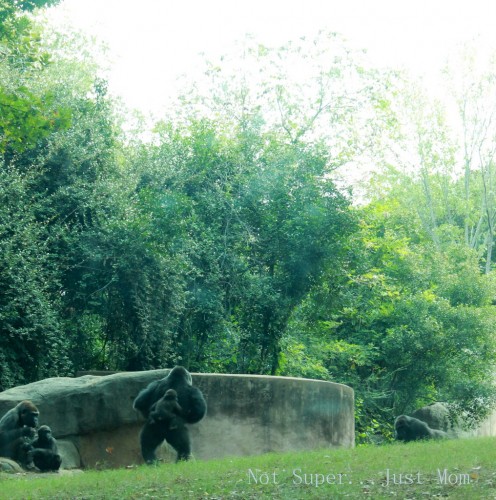 The OG of Babywearing.

Gorillas are awesome. See the mom/baby pair in the bottom left? At one point, she wanted to redirect the baby so she just yanked it around by its ear. Which I found fantastic. Not sure what that says about my mothering, but yeah. It was great. And then, of course, babywearing gorillas are always okay by me. 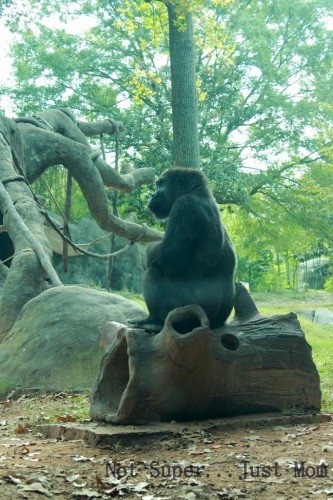 So, funnygross story about this gorilla. While we were watching it sit on this log and stare at the other gorillas, it stood up, defecated into its own hand, and then proceeded to dig through its own poo for things to eat. It’s really no wonder that the other gorillas didn’t invite this one over to play. Manners, gorilla. Manners. 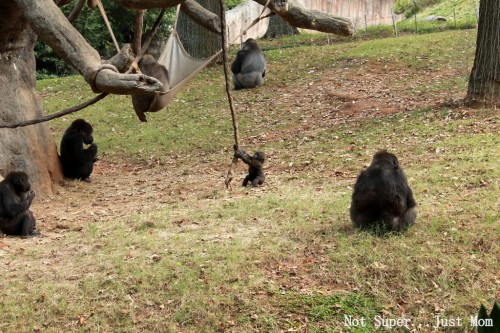 CUTE BABY GORILLA! Not even sure there’s anything else to say. I mean, really. HOW CUTE IS THAT BABY? 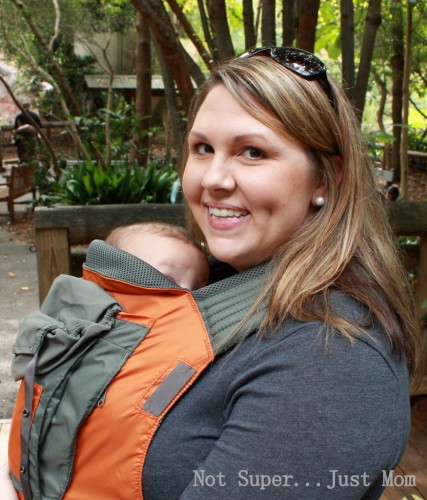 I opted for the OnyaBaby carrier yesterday because it was a little more cool and this carrier is a little more wind-blocking than the ring slings. It was fantastic! 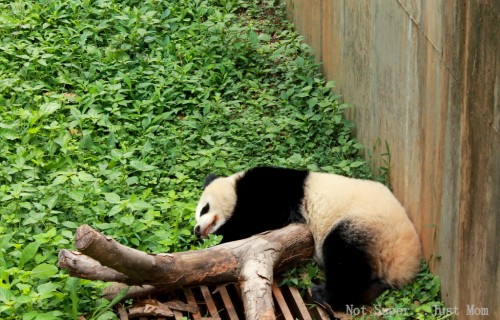 Is it just me or do panda bears not seem like REAL BEARS? I mean, sure, they’ll probably maul my face off if I get in the way of their bamboo, but jeez. They look so nice and friendly and cuddly. Not at all like regular bears. 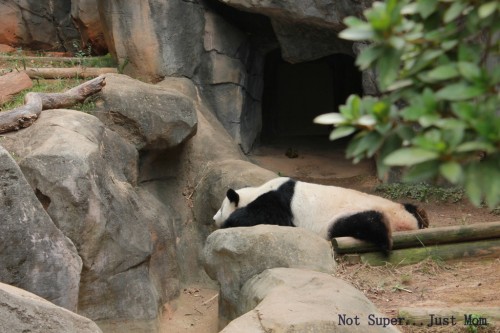 Gratuitous panda picture. BECAUSE THEY ARE SO CUTE. 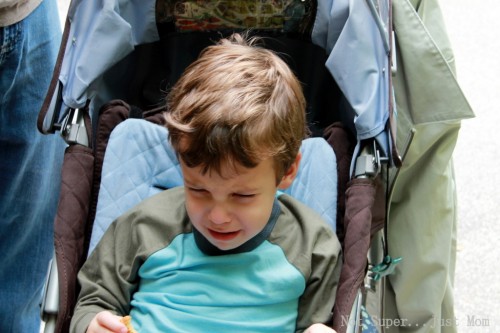 So this happened once or twice. It was…pleasant. (No, no it was not.) This meltdown in particular came because I gave him Spider-Man graham cookies instead of Spider-Man cheese crackers. I think. It’s so hard being three, y’all. WE DON’T KNOW THEIR LYFE!

And that’s not the reason he cried at all. Joshua–no lie–just looked at this picture and said “Oh no! Was wrong with me!? I didn’t wanna go to the big playground! I wanted the little playground!” And he’s completely right. There was a small play structure next to the bathroom and he did this when he couldn’t play there. 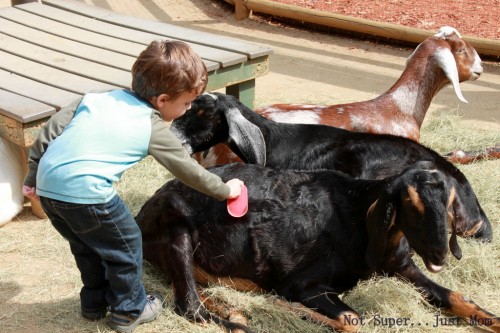 How many of YOU can say you've brushed the hair of a goat?

There’s a petting zoo at Zoo Atlanta. Except the only animals in the petting zoo are goats. Which is kind of cool because how often do you get to pet goats unless you live on a farm with goats? 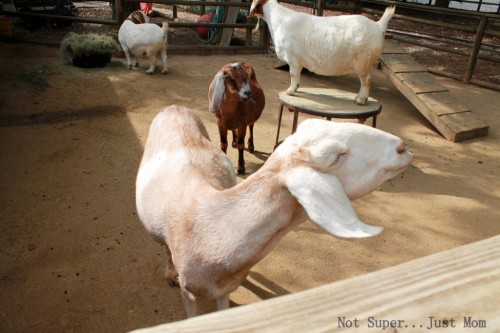 I feel like this goat is smiling at me which is the only reason this picture is here. Doesn’t that goat just look so happy to you? 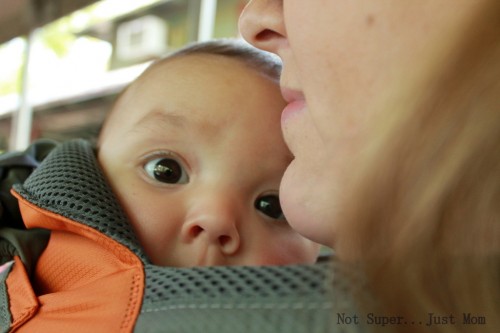 Emma would like you all to know that she enjoyed her limited view of the zoo very much. The pandas were her favorite. Because I said so. 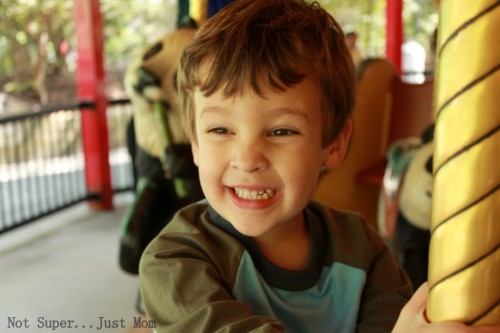 He didn’t cry the whole time, just so you know. When we got to KidZone, he got pretty happy. He also changed carousel animals three times before the ride started and then refused to let Dan hold on to anything at all. Not sure where he got so bossy. Ahem. 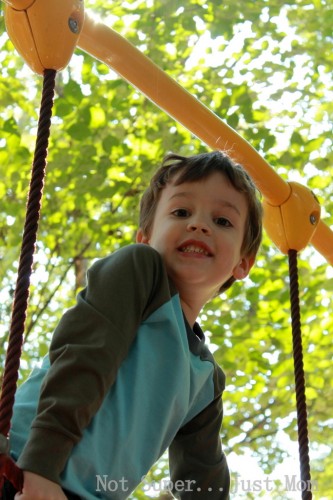 He’s recently become quite the climber and wants to climb on all the things. So he climbed up and down this rope thing about a zillion times. It earned us a nap (eventually, after more tears) so yay rope thing! Also, my kid is beautiful.

And that was our trip to Zoo Atlanta! We can’t wait to go back!

[...] October 30, 2012 In keeping with the recent theme of finding the cool things to do here and then doing them, this weekend we ventured into town to check out an Atlanta holiday [...]

I cringed when I saw that you used your groupon for today. This week is pre-k week at the Atlanta Zoo, which means $9 tickets for all in your group (minus the cute baby for free, of course). Katelyn was there with my parents today, too!

We used it on Sunday, so before Pre-k week started. And Dan couldn't have gone during the week anyway and there's no way I'm brave enough to take both kids by myself!

I hope Katelyn enjoyed the zoo!

Aren't morning zoos the BEST?!?! The closest one to us is 2 hours away, and if I time it right (and their kidzone is activity producing enough), kiddo sleeps on both parts of the trip. WIN.

(I would add that your "mediocre" animal photography is a MILLION times better than mine - great pics!!)

Oh, going in the morning was definitely a win! The weather was great, it wasn't crowded! Yes. Mornings.

I love zoo photo dumps, especially when it includes cute kids too. Although I am seriously wondering how gorillas manage to survive with habits like that.

Well, really, habits like that are self-sustaining. I mean, who needs to forage for food when you can just...I...ok. I'll stop. Because ew.

We will be heading to Boo at the Zoo too! I love Zoo Atlanta and remember going myself as a kid. It's always nostalgic to take your kids to places you went as a child. Love all the pictures! And that gorilla story is just ... GAG!

And that gorilla. Yeah. It was disgusting and hilarious.