Some of y’all know I’m kind of a fan of vampires. Chiefly, The Vampire Diaries. So one night while watching this most excellent angsty teen drama, a theory came to me.

Basically, babies and vampires are kind of the same. 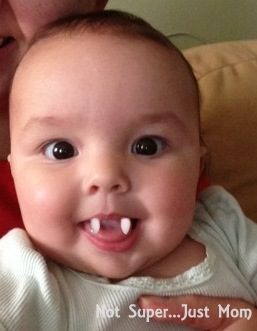 1. They both need to feed in order to live.

Emma spends her days sucking me dry. Like newly-vamped Elena, it’s just not working unless it’s straight from the tap. Thank God she doesn’t actually have those teeth.

Some creatures of the night, like Stefan, and ::shudder:: the Cullens, have decided to live peacefully with humans and survive on a “bunny diet.” Thankfully, if moms don’t want to or can’t breastfeed, babies can still thrive.

2. They both prefer night to day.

Babies aren’t exactly born with their days and nights in order. They spend an inordinate amount of time sleeping during the daylight hours and then it’s partypartyparty all night long.

Some vampires have found ways to adapt and can venture outside during the day. Some babies get their ish together and figure that sleeping thing out quick fast and in a hurry. I didn’t get that model, but whatever. Some one’s gotta work third shift, right? Maybe it’ll be my kid one day.

3. Their teeth are lethal.

If you’ve never been bitten by a teething baby, well, I just don’t know if we can be friends. Because just last night I was bitten in a rather tender place (my boob) and it felt like Emma’s baby gums were full of baby razors.

I’ve never been bitten by a vampire, so I can’t actually attest to what that pain level might be, but I can’t imagine it’d be pleasant. (I did, however, once have two students biting each other as a form of making out. In the middle of the cafeteria. That wasn’t at all weird or anything. [Totally weird.]) The movies tell me it’s deadly and if you see it, you can believe it.

If babies weren’t so damn cute, we’d just stop having them. It’s as simple as that.

Similarly, if there weren’t something really, really intriguing about vampires and their lore, we’d stop reading, writing and watching them, wouldn’t we? No one wants that, trust me. A world without Damon is a boring, less snarky world.

What do you think? How else are babies and vampires the same?

I'm CONVINCED that there has to have been a baby whose first teeth were canines. All four canines in an otherwise empty mouth...leading to vampire baby pictures.

I will not give up my search for such a baby, ever.

ELENA IS A VAMPIRE?!??! I haven't watched since the second season, so obviously this is news to me. Maybe start wearing a necklace made of garlic, just to be safe.

She's adorable, even with fangs!