I realized on Monday that I’m taking the Stay-at-Home part of being a stay at home mom a little too literally. As in I almost never want to leave the house with both kids because I’m almost never presentable and attempting to do so requires me to put on a bra.

But the truth is that kind of blows.

Kids need sunshine and fresh air. I need to force myself to put on real clothes.

Joshua woke up whiny and very, very three this morning. I knew we needed to get out of the house and do something if there was any hope of him taking a nap today, so I decided we’d go to the mall. Emma needs some new pajamas, there’s a play area for Joshua, and a Pottery Barn Kids for me. Win-win, right?

In the back of my mind, I knew that the mall was a very bad idea given his three-ness that morning. I would wear Emma and he would probably lay down in the middle of the mall floor to throw a fit and I’d be THAT MOM with the kid throwing a tantrum and oh my god why can’t she just control her kid. It probably would’ve ended in more tears than just his. In fact, I can all but guarantee it would have.

But off we went anyway. Because I’m stubborn. And nothing if not a little self-loathing.

Joshua, who has no idea what “the mall” really is, was quite clear that we WERE NOT going there. No way, no how. He wanted to go “to another house.”

“But whose house, Joshua?”

“We needa go to another house.”

So not helpful. Also quite frustrating.

So with my sites set on the mall and my car pointed in that direction, I kept driving. And he kept whining that we weren’t going to the mall. So much whining, in fact, that I looked around and realized I was going the wrong way.

Joshua stopped yammering about “another house” for about four seconds and I realized where we were. And a little bit of peace washed over my heart.

I pulled into the parking lot and off we went, the three of us. On a grand adventure of rope-ladder climbing, tunnel slides, tire swings, and acorn hunting.

My wrong turn ended up being the right one after all. 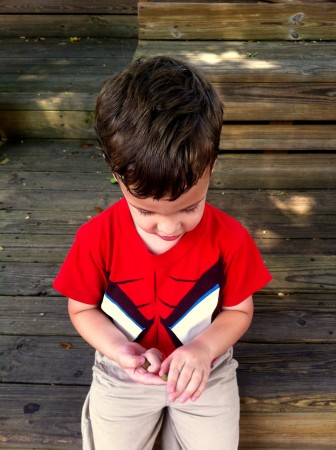 I am guilty of never leaving the house, too...and then I get all SUPER GRUMPY and unbearable and my kids are even worse (if that's possible?). So, I try to get out even when I really don't want to get everyone ready (which is always). I am almost always glad I get out of the house. Almost.

I'm glad you had a nice time and it was worth it...those days are the best!

Yes. The grumps happen here when we don't leave. So we HAVE to leave sometimes so I don't lose my mind and the kids don't lose theirs, too.

You do know that we live in ANOTHER HOUSE, right?

LOL. Yes. I know. And if he'd said specifically WHICH house, that would've been easier. Speaking of, play date and coffee soon, yes?

Isn't it hard to leave the house sometimes?! Some days I find myself so eager to escape our walls, but most of the time it's just so easy to stay at home.

It's so hard. It's way easier physically to just stay home, but mentally, staying home is hard.

regarding the having to go out in public when all you want to do is sit around with no bra on all day, just remember, summer is almost over, soon it will be winter and you can be a shut-in with no bra on as much as you want. louise also wants to go to a different house all day every day, it starts when she wakes up and doesn't end until she goes to be dat night. that house is the house of all houses, GRANDMA'S HOUSE. every day, all day, "i wanna go to gamma's house, i wanna go to gamma's house", it's never ending, and it doesn't really help that my parents have a pool.

Hooray for no bras! I think I would've been marginally less annoyed by the "to another house" if he'd simply told me WHICH other house he wanted to visit!

Best. The mall is miserable even under best circumstances. You ended up in just the right place.

But the mall has air conditioning. That's a bonus. But yes, the park was the right place.