I spent my summers on my grandfather’s farm in north Florida. It was entirely possible to go without seeing either of my grandparents until we were gathered around the kitchen table for a meal. My cousin and I played dolls, chased chickens, traipsed through the woods, swam, picked blueberries, fought with each other and resolved our issues all with little word from Pops and Granny. Those summers are covered with a golden haze in my mind and are some of the fondest memories I have from my childhood.

But as an adult, I’ve become a hover-er. A worrier. I’m terrified that something will go wrong and I won’t be there to prevent it, or at the very least, witness what happened so I know how to fix it. The thought of Joshua going outside to play without me there to supervise his every move, to redirect him away from what I perceive to be danger and he perceives to be adventure, makes the hair on my neck stand up. My palms get a little sweaty. The familiar pangs of anxiety start to roll in my stomach. I want to call him back and say “no…don’t…but not that…”

Despite my free-range summers on the farm, I’m crippled by fear when it comes to my own children.

I’m afraid that he’ll get hurt and need me. But what I’m probably more afraid of is that he won’t need me at all.

I realize that I was nearly twice Joshua’s current age when I was spending so much of my time outside and unsupervised, but I worry that if I don’t let him start to explore the world on his own a little bit, he’ll never explore it at all.

This morning he was getting a little squirrelly. So I offered up the idea that he could get dressed and go outside and play.

I tossed some clothes at him and he stripped out of his pajamas and asked for help putting on his shirt. Then he ran to the back door and waited for me to unlock it. When I opened the door, he scooped up his basketball, covered in dirt, and took off.

He came to the door and knocked on it no less than 15 times, so really, he wasn’t alone. I refilled the watering can so he could pour water on the “fwowers.” I gave him “bubble juice” so he could blow bubbles. And I kept looking out the windows and the back door to check on him.

I panicked one time when I couldn’t find him and then relaxed when my eyes finally found him.

He had climbed up into the fort on his swing set. He looked through his “nuh-noculars” and his telescope. He spun the steering wheel. And then he went down the slide, a huge smile on his face.

He had fun. By himself. Without me.

And we both survived it.

I know I have to let go, and gradually, I’m learning to do that. To let him explore the world on his terms. To let him have adventures and use his imagination. To experience the world. 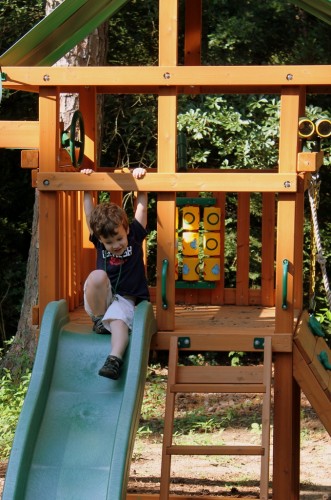 So far there is only one time I have ever let Piper outside to play in the backyard by herself. I looked out the kitchen window maybe 30 seconds after she walked out to see her standing on the concrete slab, staring at something... my eyes traced her path and then I screamed when I saw the giant dead rat being eaten by lizards 2 feet away from her.

She hasn't asked to go outside by herself again... I'm ok with that. For now. Also it's still surface of the sun hot here, so.

WOMAN! He's still so little. I think it's perfectly normal to feel stress like this at this stage. I mean, at 5 or 6 in your own yard, sure I think by then you know he won't be as inclined to goof off and fall from the treehouse but, at his age, I feel like you're feeling exactly like you should.

I struggle at the park between desperately wanting her to learn she CAN have fun without me attached to her and being petrified of the idea she might slip and fall and knock herself unconscious. I'm not actually the type to feel so worried about that stuff but, at the same time SHE IS MINE TO PROTECT!

It's nice that you're trying to think ahead and teach him these skills, and with the baby it's even more important for YOU but, I think this is all par for the course :)

I hover as well and have us to make myself let go so they can learn independence.

Joshua's really independent and wants to do everything himself. This hovering thing is totally my issue and if he had the words, he'd probably tell me to back off. :/

Our roles as mothers is to get 'em outta the nest successfully. If all we do is hang over them & fret over every infinitesimal thing, it'll never happen...and even if they do get out of the nest, they won't know how to do anything for themselves because they'll have spent their lives having it done for them. I'm reminded of the quote, "Don't cripple your children by making life easy for them."

Seriously, I was afraid to let my child go across the street to the park at age 6 to play until I started reading this. Read it, it'll change you...it changed me.

He's still little, so don't push yourself too fast :-). But I agree with Tara - Lenore's book totally changed the way I look at parenting. Her website is awesome and I wish every parent I know would read her book.

First, he's only 3.5. I'm not ready to pack him up and ship him out. Second, I'm actually not a fretter over the little things. He'll get bumps and scrapes and bruises. But part of me is scared of the bigger injuries when I'm not there to see them happen. Thanks for the links to Free Range Kids. It's something to think about.

It is so hard, isn't it? It's something I struggle with a lot, this idea of letting the kids play outside on their own...

I do struggle with it. I think, in my mind, he's still a baby, even though he's not.