No worries. I only have about three more posts about BlogHer and New York planned and then I’ll (maybe) stop talking about it. And right now, I’m not even really going to talk. Much. I think.

I’m not well traveled, so going to BlogHer this year was as much about going to New York City for me as it was going to the conference itself. I only had a few days and in those few days, I saw a lot of things, like the clouds, a rainy New York skyline from the bridge into Manhattan, and some really, really tall buildings, one of which was Radio City Music Hall. 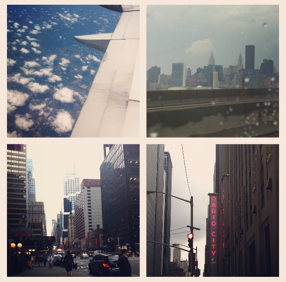 On Thursday, I saw MORE things. Like Central Park (not pictured), some buildings whose names I don’t exactly remember, and Riverside Park/the Hudson River. 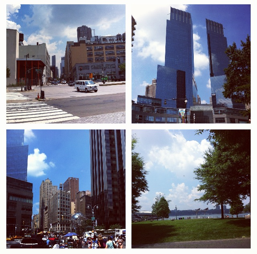 I also saw Times Square. A lot. In both day and night. But Times Square at night is so brightly lit it might as well be day time. There are also throngs and throngs of people. And costumed characters dancing in the streets. And people. It’s full of crazy energy and I love it. 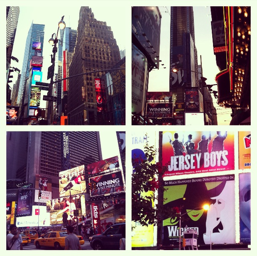 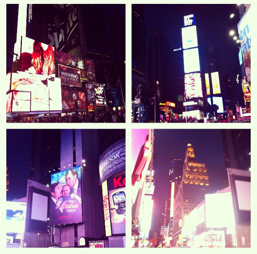 I ate a lot of food, too. Pizza. Hot dogs from carts. Italian. Magnolia Bakery cupcakes. 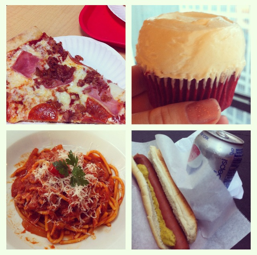 And Emma, my tiny partner in crime, was fantastic through it all. Truly. So fantastic. See? 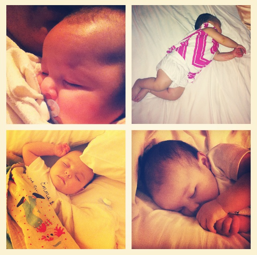 I’m still trying to wrap my head around what, specifically, BlogHer itself means to me, so that post is (probably) forthcoming. But New York City? The constant coming and going. The honking of horns. The drone of cars and people. That city is alive. And I felt alive in it.

LOVE. And now I need all that food. In my face. Perhaps you will be at Blissdom so very maybe??? Please?

That food was delicious. There wasn't enough of it. And I can't do Blissdom because it's the weekend of Joshua's birthday. BOO.

Emma kills me, too. Every day.

You just about summed up NYC for me, too -- alive, and it makes me feel alive when I'm in it.

And wonderful pictures -- I really, really should have taken more.

I wish my real camera hadn't been so heavy. I would've loved to have gotten better pictures of my first time there.

I soooo wanted to go to NYC, especially now that I'm seeing all these wonderful photos!

It was such a cool city! Such. I want to go back, like, yesterday.

I do love NYC. One reason I didn't want to go was because I didn't want to do NYC without Cort. I went in college and we missed a trip for New Year's Eve in 2004/5. It was with Cort's dad. we didn't go and when his dad got back he was diagnosed with lung cancer and died in August.

I was sad not to be there.

But I couldn't go to NYC.

I can totally understand that.