I hadn’t been to The Happiest Place on Earth in over a week, so today Emma and I packed up and headed out. We browsed. She snoozed. We bought.

And then I went out to my car to find some jackass had double parked her minivan and made it damn near impossible for me to get Emma into the car seat. 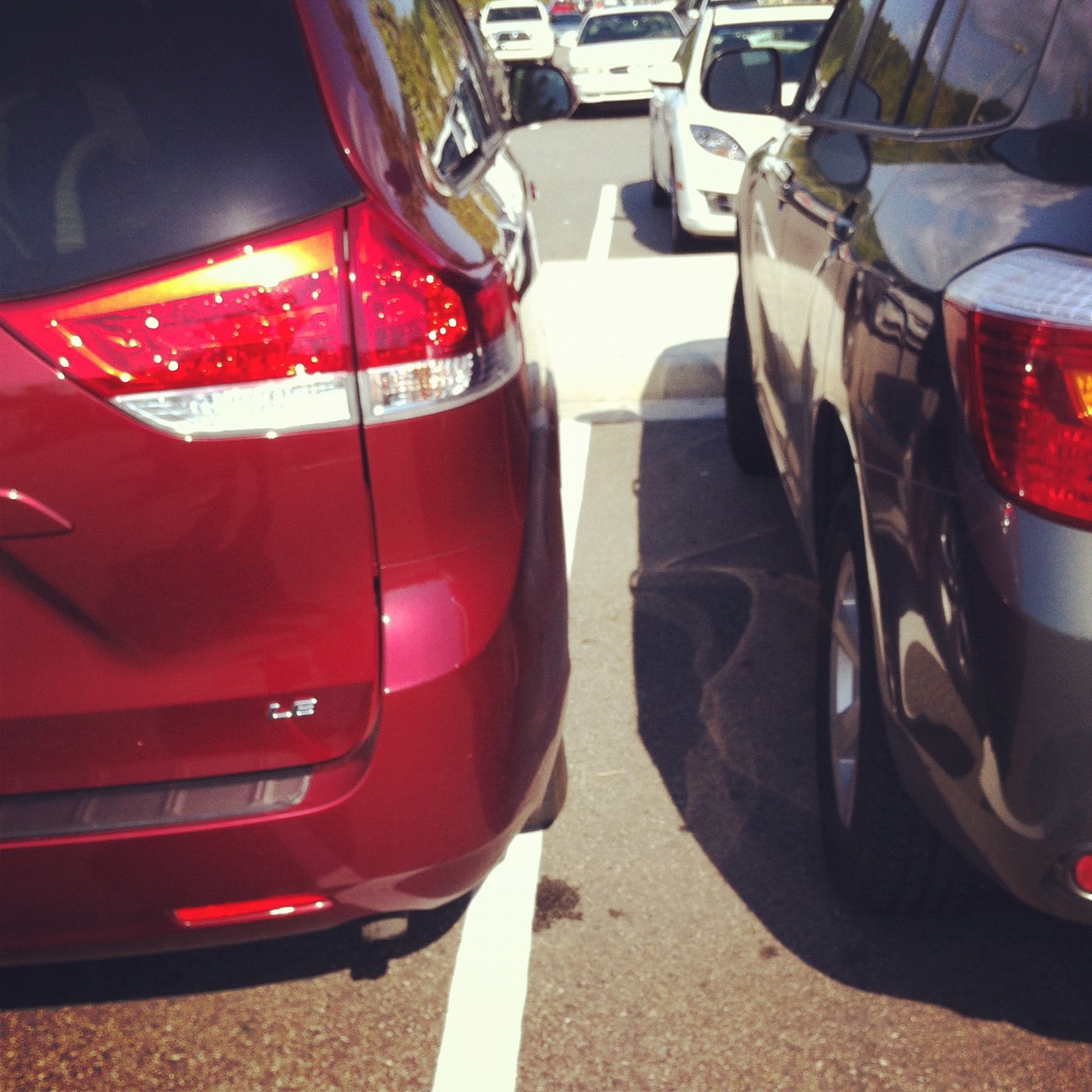 If you can't park it, DON'T DRIVE IT.

But this double parking shenanigan wasn’t the worst offense I witnessed while walking the aisles of my favorite store.

That title goes to the people on the cereal aisle who decided to curse like it was their job. Loudly. So that I could hear them two aisles over. And curse at the women who asked them to stop.

Yes, I’m serious. Allow me to recount this for you now. Complete with cursing so close your eyes if you don’t like it.

I’m browsing the cereal, wondering which one would go best with my vanilla almond milk. Out of nowhere I hear “Target fucking sucks.” So my first thought is “Well, then why are you shopping here, you idiot?” But they continued “Fuck this!” and “Fucking fuck.” And I’m all curious because this doesn’t sound like a kid and sounds very much like a 20-something and I’m heading toward the end of that aisle when I hear the murmurings of someone else asking them, politely, to watch their language. More politely than I probably would’ve because Teacher Miranda was coming out and Teacher Miranda Does.Not.Play.Games.

And then I heard it.

“Fuck you. Go fuck yourself.”

Wait, hold up. Does he kiss his mother with that mouth??

That was the guy’s response to the person who asked him to stop cursing.

I was still two aisles over and I heard it plain as day.

When I rounded the corner, a gentleman was telling a Target employee about the incident so that she could take care of it. And either she took care of it or they high-tailed it out of the grocery section because I never caught a glimpse of them. But I did see the woman who asked them not to curse.

She was a mom with two kids in her cart. A mom who was visibly flustered by what had just transpired as she tried to stop the fight over a seat belt that had just broken out between her toddlers.

She was a mom protecting her kids while she shopped for groceries.

I’m not really a prude about language. I’ve been known to drop the F bomb once or a hundred times. (Sorry, Mama.) And I don’t think that we should necessarily stop saying the things we’d say in private when were in public just because we’re in public.

But here’s the deal.

If you truly believe that the appropriate reaction in this situation is to tell someone to go fuck themselves, I question your humanity and ability not to be a douchebag. In fact, I don’t even think it’s possible for you NOT to be a douchebag and you’ve just planted yourself firmly in that category. For life.

It’s not an assault on your character if someone asks you to stop saying “fuck” while she’s grabbing Goldfish crackers for her kid.

It’s not an assault on your personal liberties if someone asks you to stop cursing so loudly China can hear you.

It’s not even an attempt to rain on your “look at me, I’m young and single and don’t have kids” parade.

It’s just a question. A request. A simple one.

And the only appropriate response in this situation, at least from where I’m sitting, is “Oh, I’m sorry.” Or even the less-committed, quasi-apology “my bad.” Or even saying nothing at all and just walking away.

Moral of the story: Don’t be a douchebag. Or a double-parking jackass.

Awesome. People cease to amaze me with their ignorance. Now I'm curious as to wait even made them swear so much at Target anyways. lol

I have no idea. NO IDEA. But whatever it was? It couldn't have been worth all that nonsense.

haha i love you!

That parking scenario happened to me when Luke was two and I was 8 months pregnant with G. It was so bad I had to go in the other door of the back seat and buckle him in because I could not even get between the cars. I had to get in through the passenger side to get to the driver's seat. You don't know how bad I wanted to wait and tell them to f*** off! Ha!

The parking thing. OMG. How could she NOT SEE that she was double parked and think "Oh, you know? I should fix this!"

Oooooo I get all mama bear about this sort of stuff, even when my own kids aren't around. I might swear and yell in private but I would be ASHAMED TO DEATH to have someone hear me in a store AND have them say something to me. DEAD. OF SHAME. I need a cane to join the brigade.

I didn't used to. I'd side-eye the person, but my hackles didn't get raised. But the ashamed to death part? YES!