I completely slacked and didn’t get Joshua’s Halloween costume until this past weekend. I was kind of afraid I’d never find it. I’d seen it on Old Navy’s website and I even kind of harassed them on Twitter over the fact that it would show up on one page and I’d click on it to add it to my cart and then it would disappear.

It was the Houdini of costumes.

So on Saturday, in an effort to get out of the house and change Joshua’s whining to something…uh…not whining, he and I headed out. I browsed the Halloween rack at the front of the store and was all “shucks” about the fact that the only costumes left on the shelf were for dogs. And not for Annie-sized dogs.

And there, hanging on the clearance rack in the little boy’s department, was THE costume. Perhaps the last costume that I can choose FOR Joshua. And it was perfect. And $5.

People, there was an Ugly Cry when we put this on him this morning. The kind of Ugly Cry where there are snot tusks and crocodile tears. I pulled back the shower curtain and the bathroom door was flung open and there was Dan, holding an Ugly Cry-ing Joshua.

Dan said, “You might want to get a good look at him in this now, because this is not staying on.” And I’m all blind without my glasses and unable to see ANYTHING. Including the toddler on the other end of the bathroom.

But I could hear him.

(Truth be told I could hear him before I’d even turned off the water in the shower.)

I took his costume to school with us hoping his teacher, the fantastic Ms. Cindy, could work her magic. And work she did.

I got a text part of the way through the morning that said “Got his costume on!”

When I picked him up, he was back in his “street clothes” and I anticipated an epic battle to get him back in it.  And should said battle ensue, I’d decided ahead of time I wouldn’t fight it. I’d just turn off the lights and banish Dan somewhere else in the house while I curled up with another episode or 12 of The Vampire Diaries.

I bribed Joshua with “corn candy” to get him back in the monster suit once we got home and then bribed him with going outside to keep him in it. And he happily accepted my bribes and we were off on the great candy quest of 2011. 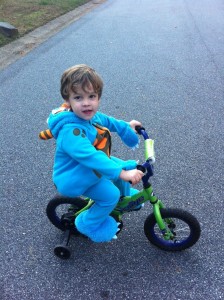 If only he actually knew how to pedal. ::sigh:: 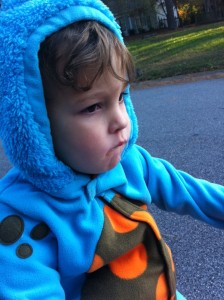 This candy quest is hard, yo. 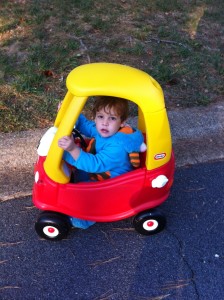 Once Joshua got the hang of things, he was leaving us on the sidewalk, going up to doors, sticking out his pumpkin bucket, and sneezing on old men.

(That last part only happened once. But when it did, there were snot tusks o_o ) 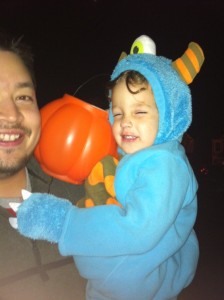 One lady asked “Can you say ‘trick-or-treat’?” And Joshua looked straight at her and replied, “Yeah!”

I laughed. Because that’s funny, y’all.

Joshua kept randomly bursting into laughter while we walked around their neighborhood. Which made me burst into random fits of laughter.

My heart is happy tonight, y’all.

LOVE that costume, I was stalking the ON website and calling the stores in my area for weeks trying to find one for my son in his size, finally found one online and was so glad! It, and your son, are both adorable!

We love you. And he is totally the cutest monster in the world. The snot tusks just add to the effect.

He is absolutely adorable. What a score! 5 bucks! We spent 40 for Chase's Scooby costume because he HAD to be Scooby...that's ok...hopefully he remembers how awesome we were when he's a teenager and the "I hate my parents" phase kicks in.

Awww! I love the story and that has got to be the cutest monster I've ever seen! Glad it all worked out! BTW, we bought costumes over the weekend, too.

I'm glad we weren't the only procrastinators! And thanks! I thought he was pretty cute, too!

He is adorable in that costume! (We had the same one - great minds...) Glad that you had a good trick-or-treating experience. We got lucky and Bubba picked up how the whole look-cute-and-get-candy thing worked from his sister pretty quick so we had a great night of t-or-t and ended up with candy candy candy!

Joshua definitely picked up on the whole trick-or-treating thing quickly after watching his friends. I love that we have friends with kids that are a range of ages who also happen to all get along.

We're rationing out his candy one piece per day by putting only one piece in the pumpkin at a time. Otherwise? Holy hell. I don't even want to think of the monster he'd actually become!

(And I totally love Old Navy costumes. They are perfect and reasonably priced!)