And I feel all foolish and ridiculous for this obsession, mostly because it’s only been about 48 hours and I’m totally searching for my next hit. 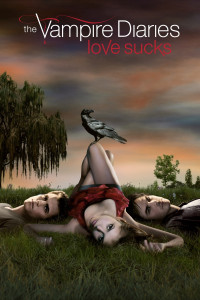 Suck on this, Edward Cullen.

Dan had his yearly inventory at work on Friday night and since the World Series has sucked the life (HA!) out of my regularly scheduled programming, I turned to Netflix to cure my alone-ness. And I found this little morsel of one-part vampire, one-part teen drama goodness.

When I say I’m obsessed, I mean exactly that.

I’ve seen 10 episodes since Friday–mostly since Saturday–so you can guess which side of my mind is winning.

When I bite onto something like this, I really sink my teeth in. (HA HA!) Like that time in college when I ripped through seasons 1 through 3 of Buffy in about two weeks.

Dan called it One Twilight Hill and I punched him in the leg.

I was kind of deflecting because I’m borderline ashamed of my obsession with this show.

I can’t decide if I’m borderline ashamed because he makes fun of me for loving teen dramas and not because I’m nearly 30 and still watching teen dramas.

(I’ve had a revelation in the last 20 minutes. It’s totally because Dan makes fun of me. But HE is the one who started watching Real Housewives of Atlanta.)

It’s totally true, by the way. Teen dramas? I love them. Especially when there are vampires involved.

Know how I know this is crazy and I’m totally addicted? I cannot stop thinking about when I can watch my next episode, including but not limited to being really, really glad I have next Tuesday off thanks to a furlough day and Joshua will be at daycare because I have a dentist appointment at 9:30 that morning. While I’m waiting on the Novocaine to wear off, I can watch. And watch. And watch.

And watch I will.

I’m beginning to think that I missed my calling in life and instead of being a teacher I should’ve found a way to make money watching television. Because if I could ever find a way to get paid for this? I’d be in career Heaven.

Just found your blog, and I absolutely LOVE VD. And my husband is a fan as well...although it might be more that he likes to watch TV and would enjoy it if I would sit with him...but since he is all about Doctor Who, well Vampire Diaries it is. Have you read the books? They are slightly different, but also amazing. And I watched the first two seasons.in like a week on netflix :-) So you are not alone :-)

Super late in reading this...Just recently following.....LOVE THIS SHOW! :) I sat and watched breaking dawn....and literally was like "Pshh whatever.....where's Damon and Stefan when a girl needs them?"

Also....My friend who got me into it? She and I have decided that VD isn't a good idea....VampD's works so much better :)

Vampire Diaries is my guilty pleasure! Love it. I watch it when my husband is not around, of course, because he just laughs at me. Unfortunately I'm all caught up now and I have to wait a whole week for a new episode! A week! Pure torture.

No new episodes until JANUARY 5th! AAAAAHHHHH!HHH!H!!H!H. And, ::sadface::.

Oh i'm a total addict. my husband HATES it but i can't get enough! I think he secretly likes it because he tends to watch it with me, while picking on me, but he still watches it.

Dan? Does not like it. And I'm okay with that. Because that means more for me!