So, there’s this party that happens at BlogHer called Sparklecorn. Guess what your accessories should be when attending Sparklecorn.

I knew I wanted sparkly shoes after seeing Alena’s, but I didn’t want to spend a fortune on shoes that I can’t, realistically, wear any other time.

So, a shoe-hunt of another sort began. I needed a shoe to use as a skeleton and I didn’t want to spend a lot on a shoe I might screw up.

Um, y’all, this might be the most awesome DIY I’ve done in a while.

I’m going to bombard you with (mostly okay) pictures so that you can sparkle up some shoes in your life, too. 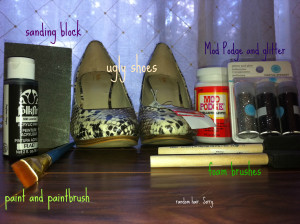 Supplies for some DIY fun!

The shoes I bought were totally ugly. And totally cheap. Which made them perfect for this little venture of mine. 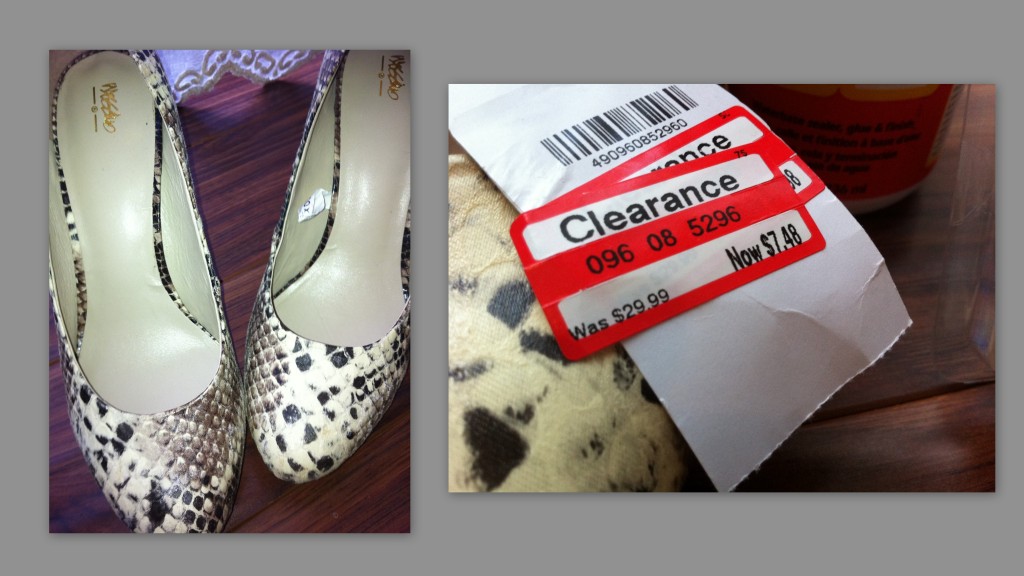 These shoes? So not my style as they are. That price? SO my style. I stumbled upon these in my never-ending search for the Shoenicorns and, while I originally wanted peep-toes, I couldn’t pass these up. In the long run, I think closed toe will be better because I won’t get blisters on the sides of my toes from these.

First? You have to prep the shoes.

Using your sanding block, scuff the shoes. This will take the shine off of them and give the Mod Podge something to hold on to as you apply it. I also scuffed the heel and platform area because I planned to paint them. If you need to paint yours, scuff those areas, too.

Then use painters tape (or regular masking tape) to tape off the heel and platform area, unless you plan to super-glitter those parts, too. I do think that it will look better to Mod Podge the two parts separately so you get a definite separation between the two areas, but it’s really your preference.

Finally, stuff the inside of the shoe with a crumpled magazine or newspaper to protect the inside from wayward globs of glitter Mod Podge.

**A note about this–As you go around the edge of the shoe, you WILL get Mod Podge on the paper. Using the handle of your foam brush, periodically push the paper away from the inside of the shoe to avoid having the Mod Podge adhere the two surfaces to each other.**

I read in a tutorial on Pinterest that fine glitter works better, but any glitter will work depending on the look you’re going for. I wanted something that looked more smooth, so I went with fine glitter by Martha Stewart. One package of three tubes was regularly $6. I had a coupon for 40% off, which brought the cost of my glitter to $3.60.

My glitter pack contained Onyx, Hematite, and Platinum. I used about half the tube of Platinum and less than 1/4 of each tube of Hematite and Onyx. No matter what color you want your shoes to end up, mix your glitter until you get the color-balance you’re looking for.

To get a little (more) shine on the finished product, I used Gloss Mod Podge. I’ll tell you why I’m really glad I bought this version later. I wish I could tell you how much Mod Podge I mixed into this glitter, but I really don’t know. If I had to hazard a guess, I’d say it was no more than 1/4 cup. And that was plenty for four coats on two shoes. I mixed it in a Ziploc bowl and put the lid on it between coats to keep it from drying out. 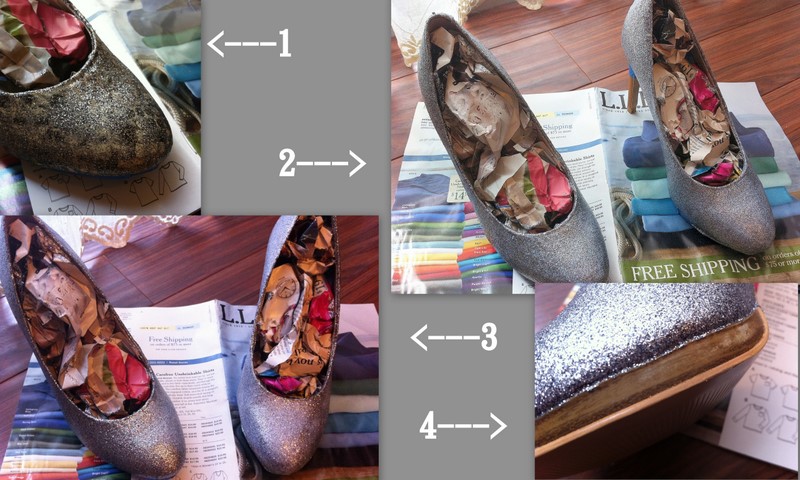 I applied four coats of glitter Mod Podge, waiting 15-20 minutes in between each coat. As you can tell from the photos, it starts off white and dries clear. I really advise using a small foam brush for this project because the pointed tip allows you to be really precise with your application. I was able to get right next to the tape without getting (too much) of the mixture on the tape itself.

Removing the tape was something tricky in some places. When Mod Podge isn’t totally dry, it will get rubbery. Places where the Mod Podge overlapped onto the tape pulled up a little bit. But! Never fear–you just pull the rubbery glue off the tape and press it back into place on the shoe to let it finish drying.

Now, as you can see here, I started with a nude-based shoe. But nude and silver don’t exactly match on this particular shoe. So? Craft paint. 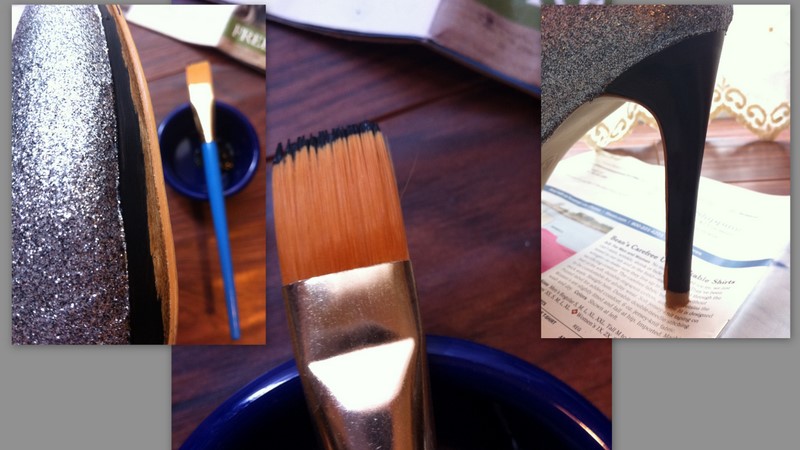 Those of you who’ve been around here a while might remember that I painted Joshua a onesie every month on his month-day. I have all of that paint and those paint brushes hanging around begging to be used. This provided the perfect opportunity for me to pull them out and put them to work so they can earn their space on my craft table.

This brush is really, really thin, which, again, was necessary for getting into the tiny places on these shoes. When I started, I intended to leave the sole and the edge of the sole nude because I just didn’t want to paint them. But that looked weird, so I slapped a coat of paint on them to make the whole bottom black. I toyed with the idea of painting the sole red or blue but decided to just save time and go with black. I’m glad I did.

And here’s why I’m glad I bought the Gloss Mod Podge.

The black paint is very flat. Very. After two coats, the heel of the shoe just looked really bland. But, I had all this glitter on hand, so why not, right?

I mixed up a small batch of mostly Onyx and Hematite glitter and added a little Mod Podge and got back to work on the heel and platform. I wanted to add just a little bit of sparkle there. 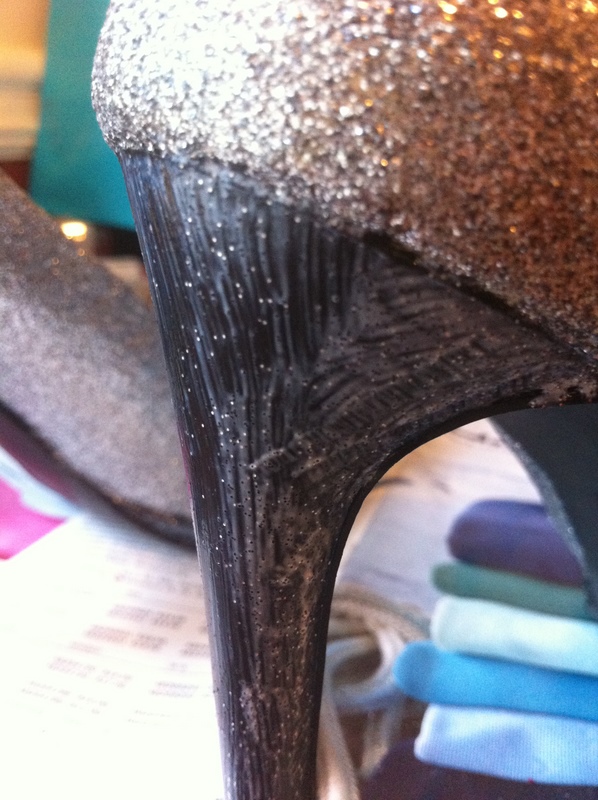 This is the second application to the heel. I wanted it to be known that the heel was black, but still give just a little shimmer. Two coats was plenty. 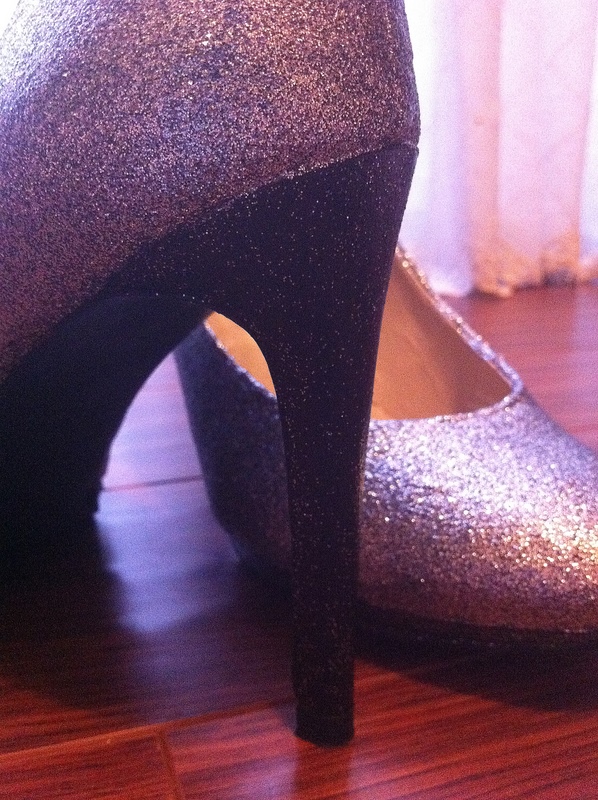 I’m so pumped about these pumps, y’all! They WILL kill me. I know that. But? I’m really excited to wear them. So excited I might just wear them to pack. You know, to break them in.

So? Slightly over my budget of $15, but WAY under the closest option I could find of $20. And I wasn’t really thrilled with that other option.

These shoes? Excite me! 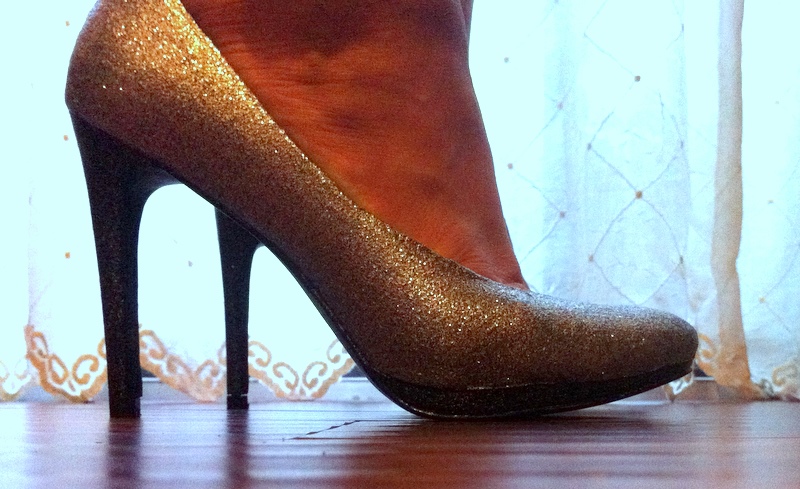 awesome tutorial. i am an art teacher and i am always pulling out the glitter glue because.. Glitter makes everything better!

Whoa. Those shoes are aweeeesome. I saw some glitter shoes at the store today and thought of all yall at Blogher. Have fun!

I am beyond impressed!

That is really awesome! I def need to try this! Would love to try it with a pair I already own (bought for a past event) and NEVER wear!