Well, there should be. 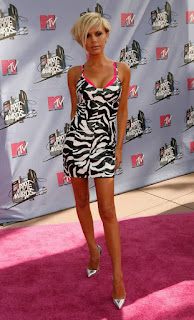 This is not normal.

About a week after the Britney episode of Glee I overheard a group of my students, two boys and one girl, talking during their five-minute free time at the end of class. One of the boys said something along the lines of “yeah, Britney looked hot. Way better than when she was fat.”

I, because I have bionic hearing, chimed in “Oh, are you talking about when she performed at the VMAs a few years ago?”

And he was all “Yeah…she was so…so…” and he didn’t want to say the word “fat” because he knew he’d stepped in a big ol’ pile of poop.

And I said “You mean, the performance she did about a year after having her SECOND CHILD!?!?!?!”

And I’m pretty sure that at that moment, my head exploded a little bit and 47 fairies died or something.

For your reference, here’s Britney from that performance: 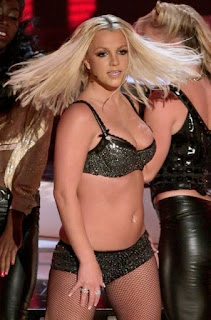 What issued forth from my mouth after that was a lecture about how comments like those, the ones made in passing, without second thought are the most harmful.  Comments like those are insensitive, uncalled for, incorrect, and unnecessary.

At every moment when he attempted to interrupt me, to beg for mercy, I shut him down. The rest of the class sat in shocked silence, completely not believing that this conversation about weight was happening. That I was challenging him. That I was daring to talk so openly about weight.

I asked him what, exactly, he viewed as fat. I pointed out that if he felt Britney was fat at that moment, he must see me as a whale because at the VMAs she was HALF MY SIZE.  And she had given birth to TWO CHILDREN.

He couldn’t speak.  He tried to say “But…but…you’re not…she’s…I mean…” and I stopped him. Dead in his tracks.

I pointed out to him that every time girls heard guys make comments like that, their self-esteem took a nosedive. That every girl in that room just got a punch to the gut, even if she’s already “skinny.” That all of their expectations, boys and girls alike, of women were unrealistic thanks to the media.  That they were perpetuating this idea that women all have to look like supermodels in order to be valued in this world. That we cannot possibly be hot and larger than a size 0. Which is not even a size, thank you very much, One Tree Hill.

Just for funsies, I looked up the definition of the word “zero.” My friends Merriam and Webster, after I waded through the math stuff, define “zero” as “4: an insignificant person or thing : nonentity 5 a : a state of total absence or neutrality b : the lowest point :  6: something arbitrarily or conveniently designated zero.”

A “nonentity”??  A “state of total absence”??  Something “conveniently designated”?!!?

Girls who clamor to be size zeroes want to be non-entities? Totally absent???

Whichever fashion company “conveniently designated” pants as a size zero needs to be burned to the ground. Or bankrupted. Or something.

I pretty much lit into that student to the point that I had to go and find him and apologize after I’d had an opportunity to feel sufficiently bad for the lambasting I gave him after hearing what he thought was an innocent comment.  His demeanor when I apologized to him and explained why I was so upset tells me that he’ll think before he speaks in the future.

(I have a student in the class after his who has been diagnosed with Body Dysmorphic Disorder and I am forever thankful that they are not in the same class.  The hurt his comments would’ve caused her alone? Unbearable for me to even think about.)

I wish I could say that this ended there.  It doesn’t.

A day or two later, maybe even the same day, I saw a tweet with a link to an article titled “Skinny Women, Fat Pay.”

The article notes that the average weight of women in the US is 160ish pounds.  Women who weigh 30 lbs LESS than average make an average of $14,000 MORE per year than their AVERAGE weight counterparts.

What gets me about this article, despite how inflammatory and charged its language may be, isn’t that this sort of pay disparity exists.  That’s a travesty, for sure.  And it most certainly shouldn’t exist.

But what gets me is the comments.  The hateful, hurtful people calling us, women like me, “fat slobs.”  Saying that if we’re over the average we’re fat because we’re lazy and we make less money because we can’t keep up with our under-average-weight counterparts and we just “sit on the bowl” all day.  That we don’t deserve the same pay.  That their companies won’t hire fat people. Period.  That the average 5’4″ woman in this country should actually weigh, at a maximum, 115 lbs.

And that was just in the first three or four comments I read.

I haven’t weighed 115 pounds since PUBERTY, people.  I’m pretty sure that both of my boobs weigh about 15 pounds.

And if I did weigh 115 pounds?  Y’all would send me to an in-patient treatment facility because there’d be something seriously wrong with me.  Seriously.

Despite my woe-is-me-I-have-no-motivation McFatty post from this Monday, I feel pretty damn good about myself.

I GREW A HUMAN, PEOPLE.  THAT IS SOMETHING TO BE CELEBRATED.

And somehow, this all just got EEEEEVVVVVEEEENNNN BETTER.

TLC, the very same company responsible for bringing us Trading Spaces and Jon & Kate + 8, has now brought us a show just for Plus-Sized Brides.

Because, I mean, we couldn’t POSSIBLY be seen on the same show as the super-skinny brides, right?  I mean, we might tarnish the image of brides as beautiful, right?  Because we can’t possibly be beautiful AND plus-sized, RIGHT?

I feel like networks like TLC ought to be more responsible in their programming choices.  That they ought to make it a mission to promote healthy body images and equality.

Quite honestly, I do not even know what their logic is for dividing skinny brides from plus-sized brides. I don’t think there IS any logic involved.  How can there be?!?  What kind of board room discussion did they have when they were tossing around ideas for new shows?

This might be the most ridiculous thing I’ve seen since the Lane Bryant commercial was pulled because the model was “too provocative” (but Victoria’s Secret can have a “fashion” show during primetime???)

THIS DOES NOT MAKE SENSE TO ME.

None of it does.

I’ve battled with self-esteem and a negative self-image for my entire life. And with things like this the hits just keep on a’comin’.

We have to start talking in terms of health. And we can’t just say “Oh, you’ve got to be 120 pounds in order to be healthy” because that’s RIDICULOUS.

Are some people healthy AND slender? Yes, absolutely. And I’d certainly never want to imply that I’m judging slender people with this argument.  I know that weight issues don’t just affect those of us on the “above average” side of the spectrum.  I know that people who are underweight suffer with body image issues too.


People deserve to be judged based on the merits of their character, not the number on their scale.

This change starts with us.  It won’t just happen if we continue to perpetuate the cycle of bad self-talk.  If we model that behavior for our children, they will repeat that behavior.  And I’m not just talking to Girl-Moms here, y’all.

As a Boy Mom, it’s my job, my DUTY, to make sure that he understands that beauty is not skin deep.

Beauty is not a size.