Last night, around 2:45, Joshua woke up crying.  By the time I got up, it seemed like he’d stopped, so I laid back down.  About 15 minutes later, I heard him crying again on the monitor, so, thinking he might be thirsty, I got his milk sippy and went to his room.

While I was sitting there, I was struck with the significance of quite a few of the ways we are hard-wired, as parents, to bond with and care for our children.

Did you know that the distance from a mother’s breast to her face is approximately 12 inches, visually?  Did you also know that this is just about the maximum distance a newborn baby can see at birth?  Because of this distance, one of the first clear pictures a newborn baby gets is of his or her parent’s faces.  This encourages bonding with parents for obvious reasons.

When Joshua was tiny, I loved staring at him while he stared back at me.  It was a very soothing thing in the midst of my hormonal chaos.  To see his little baby eyes searching my face, knowing with complete certainty that he was being taken care of.  I just want to weep with happiness when I think about those moments when I found peace in the midst of my storm.

I mean, how can you look at this and not find peace: 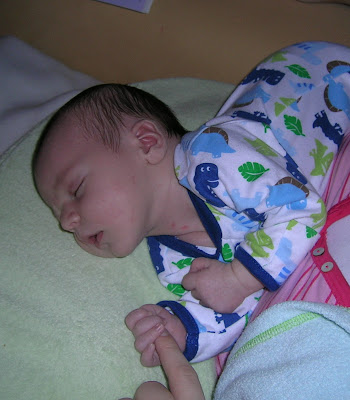 We called this “piglet pose” since he had just visited the buffet and fallen asleep.

Here’s another thing about this distance–it doesn’t matter if you bottle or breastfeed since you’re basically holding the baby the same distance away from the face to do either.  So, despite the fact that I am an advocate of breastfeeding, those who say that bottle feeding doesn’t promote bonding can suck it.

Did you also know that babies are biologically designed to look like their fathers at birth?  Historically, this was nature’s way of ensuring that fathers would care for their offspring.  Maternity is obvious.  Paternity isn’t always, unfortunately.  Especially if you’ve ever seen an episode of Jerry Springer.  So this was nature’s way of trying to make sure that babies had fathers.

Joshua, at one month old, looked so much like Dan.  SO MUCH.  See: 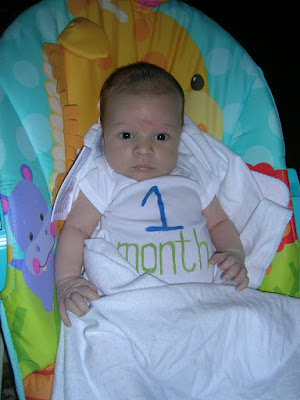 By three months, his looks started to change: 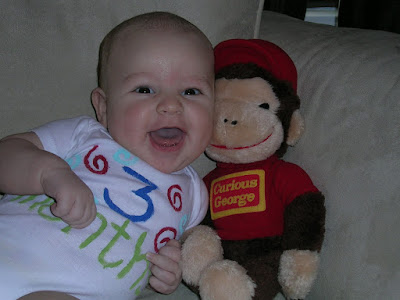 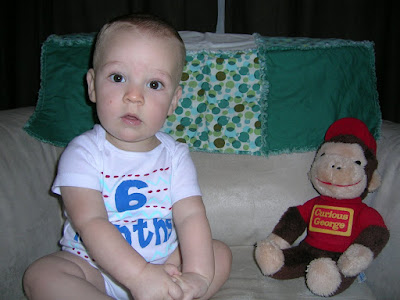 He’s a totally different child.  And he’s mine. And he loves me.

As I was sitting there in the darkness this morning holding Joshua, he reached up his little baby hand and he found his way to my cheek.  And his hand rested there for a few moments until his fingers walked their way to my ear, and then my nose, and then my mouth.

And something about that, about this bond that we’ve formed, just made me want to cry, right there in his nursery, at 3am.

I thought about that bond that I never thought we’d have and I was overcome with happiness, despite the fact that my sleep was interrupted.  In that moment, it didn’t matter, and I contemplated getting cozy with him in the chair and letting him sleep out the rest of the night on my chest the way we used to.  I just wanted to be close to him.  To breathe him in.  To never forget a single thing about him.  To remember. Forever.