My child knows what sound a duck makes.  And occasionally, when I play my cards right, I can ask “Joshua, what sound does a duck make?” and he responds with “kack” instead of just looking at me like I’ve lost my mind because I don’t know this secret of the universe and he does and how do I not know this already?

This is one of the things he’s been learning at daycare, along with where his eyes, nose, and ears are located.  Oh, and how to eat dirt.  (just kidding on that last one…sort of.)

I feel like I’m missing so much by not teaching him these things myself.  However, I fully realize that my patience is for the big kids and not necessarily for teaching the little ones.  With that being said, I’m developing a “curriculum” for the summer so that I don’t lose my mind.  We’ll focus on swimming, puzzles, and obtaining world peace (and really, I think if we put Krispy Kreme stores in the Middle East and turned on the “Hot and Fresh” sign, we’d be one step closer to that whole “world peace” thing…but I digress).

In other words that Joshua can say, “baw” is at the top of his vocabulary, which is followed by him picking up the ball and bouncing it happily around my house.  Or Wal-Mart, which is where we discovered his love for the spherically fascinating object of his obsession. 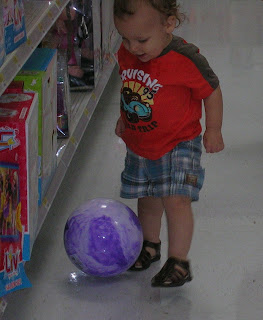 And yes, we had to buy him a ball when we went to the store on Sunday.  He was NOT leaving without one.  But it’s been a dollar well-spent.  He loves that thing.  And I love that he loves that thing.  I also am hoping beyond hope that the dog does not destroy it, even if by accident, because then I’d have a toddler go from zero to meltdown faster than you can say “ball.”

Want to know what words he canNOT say?

He knows who we are, but he refuses to say our names.  I think he might know how to say these words and he’s holding out on me.  Like, by NOT saying “Mama” he’s being a rebellious toddler.  I just hope he’s getting all of that rebellion out of his system now so we can have smooth sailing when he reaches adolescence.

And I also think that he’s already practicing selective hearing (which I realize will get worse as he gets older).  When he’s in “Monster Mode” there is NO stopping him.  For anything.  He must GOGOGO.  This inability to hear me say anything at all must be coded into his DNA.  Or, the pitch of my voice is just at a level that is inaudible to males. 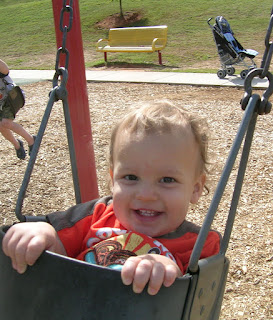 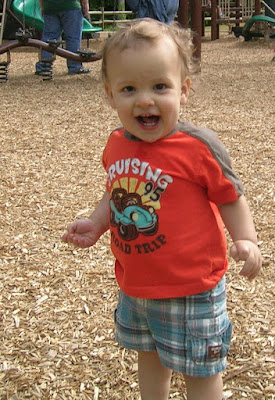 Cute! Way to go, Joshua! Pretty soon, you'll be begging him to shut up! :) I love how kids must think that we're so stupid because of the questions we ask. But my favorite is when another adult answers for them as if I'm truly an idiot. (Me to child: What color is that? Adult: blue. Me: Really? Cause I didn't know that. Maybe let the kid answer next time!)

I'm so sorry to hear the sad news about your student. My heart goes out to everyone that is hurting for him. Being a mother makes it so much harder. Give your sweet boy extra hugs and kisses.