In an effort to not be COMPLETELY long-winded (which, let’s face it, will probably happen anyway) I’m going to post about our weekend in several posts–The Bad, The Good, and The Best.

I’ll start with The Bad so we can go ahead and get that out of the way.  I’ve even got pictures now.

My child does not like being in the car for longer than five minutes. I tweeted about this on the ride down. I posted about it last night. I listened to him protest for two hours in the car today before he fell asleep.  Then he was okay. Then he wasn’t okay anymore. It wasn’t cool, y’all. 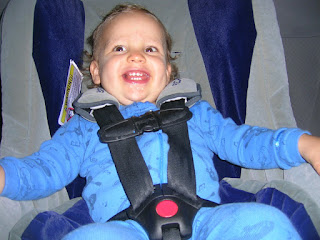 This is his “Hey…this isn’t so bad” face

When he was a wee babe, just a mere four days old, we embarked on our journey home from the hospital. We got on the sort-of interstate and he was all happy baby. Until we got off on our exit. And then he started SCREAMING. And he screamed. And screamed. And screamed. And then he kept screaming for the next four months.  You know the stories of parents who put their precious little bundle in the car and drive him or her around the block to knock the baby into pleasant dreams? Yeah.  That was never us.

That is STILL not us. 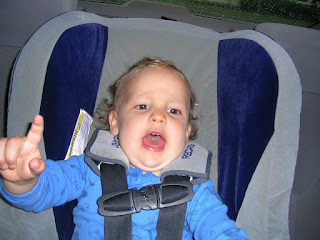 T
This is his “YOU BETTER GET ME OUT OF HERE” face. He’s even pointing at me for emphasis.

He’s in a fancy shmancy convertible car seat.  He’s forward-facing (more on that later). He has toys. He has a view. He has air conditioning.

He still hates the car.

The times we were in the car (which were many and frequent) this weekend were definitely the worst of the trip.

There wasn’t really any “relaxing” happening on what might be our only vacation until next summer. I know I wrote about this yesterday, but I feel it’s worth mentioning again.  If I have done the math correctly, I slept a total of 28 hours this weekend, give or take an hour either way.  TWENTY EIGHT HOURS, y’all.  Out of about 72.  THAT IS AN ENTIRE DAY’S WORTH OF SLEEP.  But relax? No.  There was no relaxing.  There was no pursuit of leisurely activities.  There was no lounging by the pool with a book or trashy magazine.

Those days, at least for the foreseeable future, are over.

There is nothing to do in a hotel room after your child goes to sleep that does not involve a computer or sleep.  People suggested setting up the pack-n-play in the bathroom so that Joshua had his own space and we were sort of free to watch TV or talk at volumes audible to other HUMANS after he’d gone to sleep.  This arrangement poses (at least) three problems:

1) Have you ever shut the door in a hotel bathroom? (And please, God, tell me you shut the door when you do your business, especially when staying with others.) There is no ventilation. My child would have a heat stroke in the hotel bathroom. And then I’d go to jail for making my child sleep in a bathroom.  And orange isn’t my color. Not to mention my child would not have survived in that non-ventilated bathroom.  And really, would YOU want to sleep in a bathroom?  I mean, assuming of course you haven’t imbibed too much and/or aren’t sick with the Mongolian Body Rot (in which case…sleep away, my friend. Sleep away. The bathroom floor is a great place to rest your head).

2) The pack-n-play wouldn’t even fit in our hotel bathroom.  Even though it had a super-cool pocket door (note to self–requirement for next house–must have a pocket door somewhere!) there was no way to put the pack-n-play in the bathroom.  It just wouldn’t have been very possible.  I mean, maybe it would’ve been.  I’m not very good with spatial arrangement.  Or maybe I am. I feel the need to look up the definition of the word spatial, but I’m kind of not in the mood for dictionary.com right now.

3)  If the baby is asleep in the pack-n-play in the BATHROOM, then where am I supposed to go when I need to pee?  I mean, we all know that once you carry a HUMAN on your BLADDER for 9 months, that bladder is never the same again.  Even though I did not push a human out of my vagina, my bladder has not recovered from pregnancy.  I still pee at least once a night.  And if there’s a pack-n-play blocking my way to the toilet, I can’t exactly pee on said toilet.  And trucking it to the lobby in a half-asleep, non-bra wearing state might get me kicked out of the hotel.

Traveling with a toddler who has a pretty predictable schedule is tough.  Really tough.  We were limited to being within reasonable distance from the hotel at any given time so that if he needed to get back for a nap, we were there.  Sunday night, in an attempt to get him back to his normal routine with his normal bedtime, we put him in the pack-n-play at 7:15 and sat on laptops in silence until we knew he was asleep, which took at least an hour.  But we did it because we believe that his schedule is worth it.

The schedule is good.  I believe that with every fiber of my being.  I stressed and stressed about how he wasn’t on a schedule until he moved into the toddler room at daycare and BAM! Schedule.  And now that he’s on that schedule, I’m reluctant to do anything to eff it up because that predictability saves my sanity.  So, that meant sitting in almost complete silence in almost complete darkness for as long as it took to get my child to sleep because his sleep is that important to his well-being.

Okay, so that’s about all of the “Bad” that I can think of.  And it’s really not that bad.  This has actually helped me realize that maybe the weekend wasn’t as “meh” as I thought it was.  Cool, huh!?  Coming tomorrow: The Good.  Of course, you know, I’ll be saving “The Best” for last. 🙂

To Anonymous--Yes, we did decide to go forward facing. I have a post planned for our decision to turn him around coming soon.

Did you decide to go forward facing already?

the one time we had to stay in a room with eddie, he needed the pack n play to be on MY side of the bed so he could hear me breathing. And I had to spend a LOT of time in the room doing nothing but reading or sleeping. Boo. I also feel that my vacations are over...for a while anyway. And yes, I get all stabby about it sometimes...I think that is natural...i hope anyway.

i don't know how you found my blog but holy crap, i'm glad you did. this. was. awesome. i have a headache, i'm congested and i needed a laugh. if you could send me a drink through the internets, that'd be pretty awesome too.

last weekend we put our son's pack n play (11 mos) in our closet while my parents were visiting. at first i was all 'this is madness' until i realized that our closet is air conditioned so i probably wouldn't go to jail...

My youngest hated the car too! She would scream everytime we were in it. We seriously could not go further than 5 minutes away because we couldn't take the screaming. She outgrew it at 3 months thankfully. We try our best to stay at motels that have the "suite" option. That way baby can sleep in the bedroom and we can hang out in the living room area. The last time we did this we put baby in the large walk-in closet in the hotel room so we could still have the bedroom to ourselves! It was dark in there and she slept just fine.