Last night as I was recapping my horrible day for Dan, he said “Why don’t you ever dwell on the good days?”

It’s hard to dwell on the good days because they feel so few and far between.  But maybe that was the lack of meds talkin’.  (If there’s one thing I’ve learned from yesterday, it’s that I must never, never be without my meds.  At least not for the foreseeable future.  The pharmacy being closed on Easter really threw me.)

So, today was a great day.  And I’m going to tell you all about it so that when I’m having another day like yesterday, I can come back here and read about a good day.  (And I’m hoping y’all will stick around because I’m not all mopey, woe-is-me all the time.)

I posted earlier about how the day got off to a better start because we got a full night’s sleep last night.  So that was good.  Joshua had about a 1/4 of a pancake and a cup of yogurt for breakfast.  I had coffee.  Because that’s what I do.  I drink coffee.  It was great.

Then, we watched some Sprout because Joshua has a thing for small puppets with weird voices.  They mesmerize him.  And it’s kind of funny to watch.  And don’t yell at me for using the electronic babysitter or for rotting his brain.  It’s not like I parked him on the rug and left him there all day.  We chilled.  He sat in my lap.  We listened to Chica.  We pointed at various parts of his face and my face and I tried to get him to say the words.  (He knows “eyes”, btw, and will stick his finger in his eye and/or try to touch his own eyelashes when you say the word.)

Then he decided that sitting in Mama’s lap was not what cool kids do, so he got up and Monstered around the living room.  (And any mom with a toddler will tell you that “monstering” is exactly what a new-ish walking child does.  It’s like Godzilla in your living room.  Only instead of knocking things over, things knock him over.)

Once we came back inside, he had kind of reached meltdown status.  He was whiny and complainy and he kept tripping over his own two feet (and I didn’t have a breakdown!  WOOT!).  That signals naptime.  So I made a bottle (SHUSH, people!) and we went to the nursery and he had about half of it and I put him in his crib and he didn’t fall asleep.  Um.  What’s up with that, Joshua?  You were sleepy.  But after about twenty minutes of talking to himself, he did fall asleep.  And he slept for TWO HOURS.  And I blogged, and Facebooked, and e-window shopped, and just enjoyed the silence.

When he woke up, he was happy.  So we played for just a bit and then I decided to try some lunch.  I cut a tortilla in half and made him a turkey and cheese quesadilla.  He had a half of a quarter of a quesadilla, which I’m told is an eighth, but which is, to me, still a half of a quarter since I didn’t make a whole quesadilla.  You follow?  It’s numbers.  It’s cool if you don’t follow.  I’m not even sure I follow.

He also had some banana and some milk and then he was making it quite apparent that he was DONE with being in the highchair. So I let him down and he monstered around again for a bit.  It’s weird how fast time went today, because it seemed like no sooner than I fed him lunch and let him down, he was tired again.  I know he’s not feeling well, but he slept an awful lot today (not that I’m complaining.  Pinky promise!)

Anyway, he fought going down for his afternoon nap.  Fought it hard.  Fought it so hard I had to go back in and hold him for a bit to settle him down.  And then when I put him back in his crib, he whined a bit and then fell asleep.  Until 4:00 p.m.  So I took that as an opportunity to sleep, too.  Because, I mean, I AM on Spring Break and all.

When we got up, we went outside and he monstered up and down the driveway with a stick or two. In true little boy fashion.  I took a couple of pictures, and a video, but the video seems to be too large to send from my phone via email  I’ll work on trimming it and uploading it later.  It’s one of those videos only a mom could love because it’s basically of him doing nothing except enjoying being outside.  And man, does this kid love to be outside. 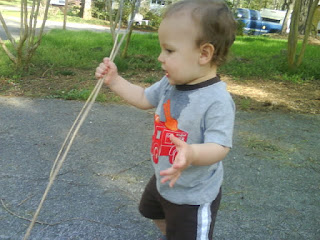 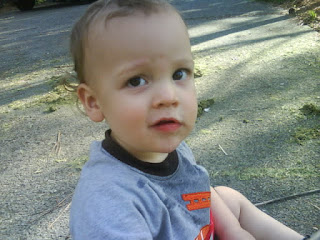 (Nevermind the drool and juice spot on the shirt.  I think we might be trying to cut a molar or twelve.  And he’s still getting the hang of the sippy cup.  And we stayed home today and have no one to impress.)

But then a strange thing happened.  We came in and he ate dinner.  Or he ate some things.  And it was a random meal, but he ate them.  And I didn’t get stressed out until he started trying to throw his bananas in the floor.  And no, it’s not the mess I was worried about cleaning up.  It was the mess the dog would make at 2 a.m. if she overindulged on bananas.

And then we did bath time and bed time and he fell asleep peacefully and we had steak and salad and we watched TV.  And now I’m about to be shocked by the results of American Idol.  (::jawdrop::  NOOOOOOO!!!!) and soon I’ll go to bed and I’ll wake up and I’ll have another good day tomorrow.  Because I’m getting my hair done.  🙂

And that, loyal readers, is how you have a great day.

You just responded to my comment on Jill's Baby Rabies blog, and I wanted to say thanks. There are a lot of us out there who have experienced birth trauma, and it's awful. I appreciate your comment so much, and yeah, I wish I could give you a hug, too.

Much love to you.

I'm glad you had such a good day! :) Days like these are what I live for.