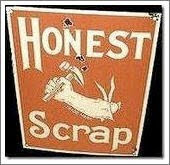 I’m supposed to tell you ten random, honest things about myself.  Here goes:
1.  I don’t like to eat alone.  I feel like a big ol’ loser if I have to eat somewhere in public by myself.
2.  When I was a toddler, I was a model for Montgomery Ward department store.  I was super cute. Then I grew up and got a smart mouth and stretch marks.
3.  I will watch almost anything on TV, no matter how cheesy or terrible it is. And part of me will probably enjoy it. But it bugs the crap out of me when Dan comes into the living room, turns the TV to something, watches it for five minutes, and then leaves the living room.  Particularly when he strands the remote control across the living room from where I’m sitting.
4.  When I was in the 3rd grade, I wanted to be a pediatrician because I was the only kid in my class who could spell the word pediatrician.  I should’ve known then that words would be my thing.
5.  I knew Dan was “THE ONE” when my cat broke his leg (the cat’s leg was broken, not Dan’s…damn pronouns!).  Cooper was playing “Action Cat” in the living room and fell off a chair and broke his leg.  Dan took him to the vet for me while I took myself to work and Dan paid the vet’s bill because “he had more money to spare than I did.”  We’d been dating for about three months at the time.  I knew he was a keeper right then and there.
6.  We do not own said cat any longer and will never own another cat as long as we both shall live.  If we’d thought about it then we probably would’ve put it in our wedding vows.  I do not have the patience to clean a litter box or sweep up cat hair or cat barf or cat urine that hasn’t made it into said litter box.  Ever.  No more cats.
7.  I cannot wear hats. The distance between my ears and the top of my head is freakishly small (which helps give our child a normal head size when combined with Dan’s GIANT cranium) and hats just look dumb on me.  The bill of a ball cap will sit down in the middle of my eyes if I try to wear them like normal people.  And then I can’t see anything at all.
8.  I need more sleep than the average adult.  Seriously.  I could sleep 12 hours a night, every night and take a two hour nap every afternoon and still not feel like I got enough sleep.
9.  My college roommate and I used to drive almost an hour just to eat at Cracker Barrel.  And her husband (then boyfriend) can leave one peg in the little peg game on the table every single time he plays it.  And I have only done it once in my entire life.  I am incredibly jealous of people who can defeat this “game” and I won’t play the game in front of Dan because I feel like an “ignoramous” when I play it and leave four (or more) pegs standing.
10.  I have a tattoo.  I love it and at the same time, wish I didn’t have it, or wish I had something different.  Part of me would like more tattoos and part of me (the rational, spend-your-money-on-something-worthwhile part of me) knows I’ll never get more.  But I still want them.
Okay.  So, there’s 10 random facts about me.
Now I’m supposed to give this award to five people, so, I’m awarding
Dana @ Growing up Graham
R @ Full Circle
Cate @ Speak of the Indescribable
S @ Life with the Sweetpeas
and
Heather @ Sometimes and Always
Go visit them!  They are awesome women!
McFatty Monday begins tomorrow.
Happy Sunday!
Click here to cancel reply.

I also modeled when I was a little girl!