In 1993, I was turning 11 years old.  And on my birthday, the blizzard to end all blizzards (speaking from a Georgian’s perspective, that is) dumped out of the sky and ruined my slumber party plans.  I’m still bitter. (Not really…)

It hasn’t really snowed here since then.  I mean, it HAS, but there hasn’t been an accumulation of more than two inches or so.  Ice, however, is another story.  We’ll get a mean ice storm every couple of years or so and then it’s humorous watching all the idiots who think they can carry on, business-as-usual, end up in ditches.  I don’t WANT to laugh at them, but I can’t help myself.  When the weather outside gets bad, I take that as a sign from Heaven that I’m supposed to remain in my pajamas huddled under a blanket watching Law and Order reruns on TNT.

So, we had a “snow day” on Friday.  And they released us from school early on Thursday, too.  For an accumulation of about 1/2″.  Yes, I’m serious.  All you readers who live in places where it snows a foot a week from November to March can continue laughing.  My state doesn’t even own a snow plow.  Not a single one in the ENTIRE state.  We have farmers with plows that can be attached to tractors and in some cases, those are called to action.  But the state of Georgia does not own a snow plow.

Despite the fact that we had an accumulation of 1/2″, it’s not going to be above 22 degrees today.  Which is really freaking COLD, people.  And it didn’t get much higher than that yesterday, either.  Which allowed me to bundle Joshua up and take him outside to “play” in the “snow.” 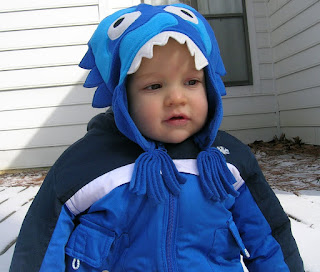 Hey…what’s all this white stuff on the ground?  Wait…what’s a “ground”? 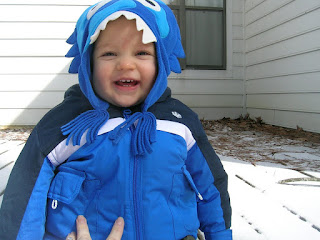 This is really fun!  I like it out here!  I get to wear my cool Monster hat and everything! 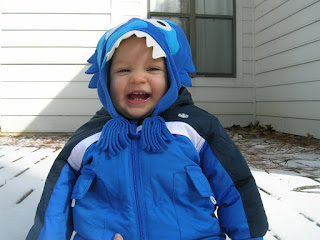 Oh, Mom!  You’re so silly!  Of COURSE you’re the prettiest Mommy ever! 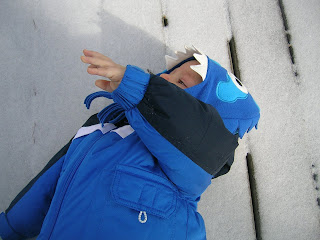 Wait a second…what just happened?  You want me to what?  What’s a “snow angel?”
And then we went back inside because I am not equipped to handle temperatures below 40 degrees for longer than it took me to snap those four photos. (Okay, I actually got SIX photos…) I think if Joshua were walking, and if his mother had bought him a winter jacket that isn’t actually a size too big thinking he’d grow into it, we might’ve stayed out a little longer.  Or maybe not.  Because it was COLD.
Click here to cancel reply.

Hey, I gave you an award. It's over at my blog www.completelyeclipsed.blogspot.com

Those are seriously cute pictures. I want a hat like that! Visiting from SITS to say hi :)

Bella is just plain ticked off we didn't get snow. She thinks it's a conspiracy, lol!

That was cute and he is absolutely adorable!!! I'm with you on the whole not going out for long when it's cold outside thing. 3 of my children are old enough to play 'somewhat' unsupervised, secretly I lurk behind curtains and blins watching most every move they make but they played for hours while mommy and baby sister stayed snug inside the nice warm house. =)