You know…the one who licks her finger and then wipes her kid’s face.

We took Joshua to see Santa yesterday morning.  This was actually the first weekend that we’ve had the opportunity to take him.  We tried to time it so that we could get him there at 9am when the line for Santa opens.  We got there at 9:30.  And we were already about 20 people deep in the line.  Apparently all of those moms had the same thought I did–beat the crowd by getting there early.

Joshua was a trooper, though.  An adorable, amazing, sweet little trooper. 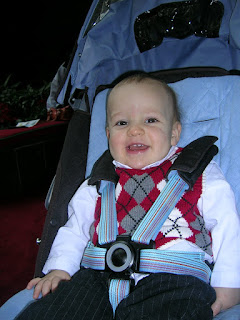 He sat in his Baby Escalade stroller (The Maclaren Techno XLR, a stroller I am in love with) for half the time we were in the line.  Then he started getting a little cranky.  So we held him for the remainder of the time that we were in the line.  We played “Catch the drool” the entire time we were waiting for Santa.  (And when, exactly, do kids learn to swallow their spit instead of letting it run down their chins?  Never?  Okay…good to know…)

So, after the drool wiping and face-crusty-getting and baby juggling while waiting for Santa, it was finally our turn.  Here’s the thing about pictures with Santa.  They are highway robbery.  Yesterday, we paid $25 for a photo CD with ONE photo on it.  One.  And the coloring on the photo isn’t even great and I’m having a friend doctor it for me.  (So I’m reserving the right to share the official Santa picture of 2009, the first of many to come, until then.)

I also felt really rushed to throw him at Santa, snap the picture, choose the picture, pay, and get the hell out of Santa’s area.  I get that the job of being the official Santa photographers has to be a thankless one full of screaming children who are scared of the jolly old man, but I seriously felt rushed.  As a result, Joshua’s pants’ leg is hiked up, he’s barely smiling, and in the picture where he WAS smiling, he wasn’t looking at the camera.  In the haste not to be an inconvenience, I picked a picture I was only sort of happy with.

Regardless, my kid is adorable.  He looked so cute in his little argyle sweater vest and his pinstriped pants.  And his pediped loafers.  SO CUTE.  I just want to eat him up. 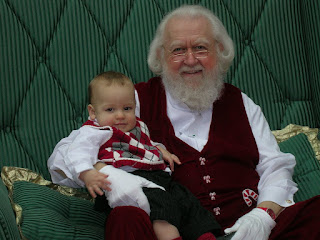 One cute thing I noticed, however, is that Santa asked “And who do we have here!?” when I put Joshua in his lap.  I thought that was a cute touch since Joshua had no idea who this bearded man was.  At first, Joshua just stared at him.  That was probably the cutest picture of the three the photographer snapped, but since it didn’t show his face, I didn’t choose that picture.  When I went over to get Joshua from Santa’s lap, Santa was singing to him.  I thought that was really sweet.

Anyway, his first Santa picture is a success.  He’s not screaming his lungs out in terror.  The picture will be great once it’s properly doctored, and I’ll be sure to share the cuteness with y’all.