Every month I ask myself this same question?  How is it possible that Joshua is already eight months old?  How has it already been eight months since my water broke while waiting to eat dinner at California Pizza Kitchen?  Have we really survived the “fourth trimester” or am I dreaming?

We went out to lunch with my friend Dana and her little guy Graham yesterday and the whole time we were there, as Joshua ate his peas and applesauce and squirmed and sat in a highchair, I just kept thinking, “Was Joshua ever that small??” While I know he WAS that small, he never seemed that calm, or maybe he was and I was too caught up in the throes of post-partum depression to realize it.  I don’t know.  There was just something that I realized yesterday about where we were then and where we are now and I can’t quite put my finger on it or articulate it but it’s just different.

It’s fun to watch him maneuver around the living room without having to actually learn to crawl.  He’s got this crazy roll-and-sit thing he does to get wherever he wants to go.  I had to bust out our first baby-proofing item the other day to close the doors to the entertainment center because he figured out how to open them.

He’s getting more, um, for lack of a better word, convenient.  (Hang on…let me explain…) Since he hated sitting in his infant seat unless we were in the car (and even then, he hated that for the first four months or so of his life…) it was hard to go anywhere with him.  I could Moby him to go shopping, but I couldn’t Moby him to sit down at a restaurant and eat dinner.  So we were kind of stuck in the house.  In the past few weeks we’ve learned how to time his meals so that we can actually go to restaurants and sit down and eat dinner.  It’s nice to be able to do that again.  He’s actually going to his third restaurant in a week today.

He’s just really, really fun right now. And I love him.  A ton.  His laugh makes me laugh and his smile makes me smile.  I was meant to be his Mommy. 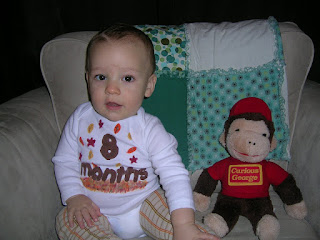 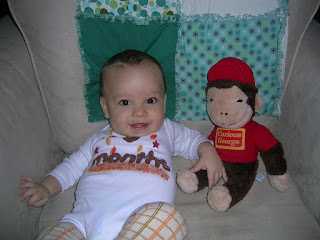 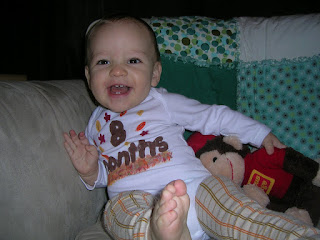 Wow. Your son sounds a lot like mine. Mine is almost 14 months already. INSANE. But, like you, I don't remember him being so easy going as a small baby, and he hated (still does but tolerates it better) his car seat, so I didn't like taking him anywhere. Also, he hated swings, slings, bouncys, and cribs.

I totally understand "getting more convenient." It was so nice when we were able to start taking him out to eat and stuff like that. And they only get better!

Stopping by from SITS!