I feel like I JUST wrote this entry for Joshua’s 6 month birthday YESTERDAY. It’s been an entire month already. Ridiculous.

He has four teeth now, has weathered several colds and a bout of recurring diaper rash and has come out a champion.

He is so close to crawling he can taste it. Then it’ll be time to figure out how to contain him in the living room. Multiple baby gates will be involved, no doubt, as will a new configuration of furniture.

He visited the pumpkin patch for the first time, and was an AWESOME dining companion at Taco Mac last weekend.

He celebrated his buddy Collin’s first birthday, and in another week, the boys will celebrate their first Halloween.

He has also started consistently sleeping through the night. We put him down at 7:30 and he doesn’t wake up again until sometime around/after 4 a.m. Yes, yes, I know, 4 a.m. is a ridiculous time to get up, but we give him a bottle and he goes right back to sleep until I wake him up to take him to daycare. I never thought the night would come when he consistently slept through the night. Never. But it has.

He’s growing up so fast. My heart kind of hurts to think about it. I think it grows two sizes every day just looking at him and seeing his happy, smiley face.

I love this boy so much. 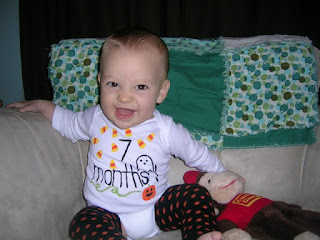 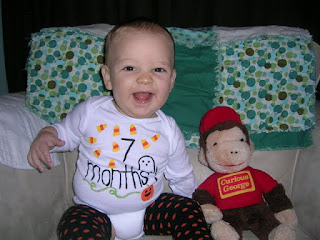 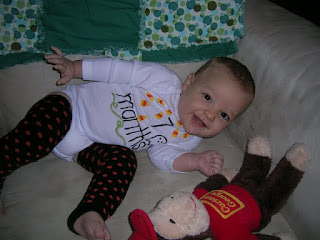 It makes my heart smile to read a post by a mother so in love with her child! You are both blessed.

Awww. so very cute. Love the blog. Enjoy. Saw you on sits!=D