He has grown SO much over the past three months, but seriously, THREE MONTHS?? I feel like we JUST brought him home! It’s funny to say he’s grown so much in three months because, let’s face it, he wasn’t small when he was born.

He has decided in the past two weeks to take a serious morning nap lasting at least an hour and a half, but usually closer to two hours. He has also been pretty consistent with taking at least one afternoon nap that lasts for an hour, sometimes two. He’s also taking consistent cat naps in the evening. And guess what, y’all! All of these naps take place in the bassinet and NOT in my arms!

Over the past week or so he’s also decided that the Bumbo seat is the COOLEST seat on the planet, and sitting with Mommy and Daddy while they eat dinner and talking them through how to properly chew their food is his responsibility. He has grown fond of the activity mat (finally!) in just the past few days.

Every day I learn something new about him and what he likes and doesn’t like. Every day with him gets just a little bit easier. Every day also gets us closer and closer to the time I have to start leaving him with someone else during the day so I can go back to work. I am not looking forward to that.

I love this little guy.

Now, for the moment you’ve all been waiting for, (provided Blogger and Firefox cooperate with me) the three month pictures! 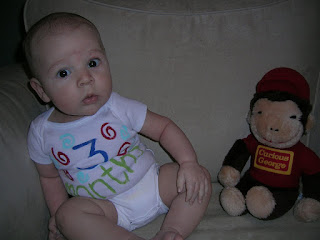 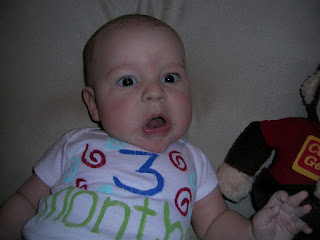 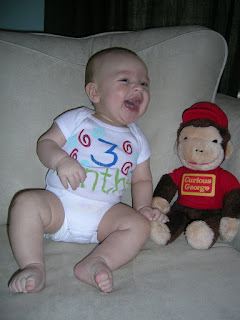 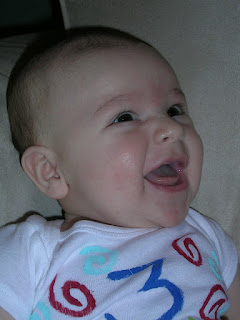 He is SUCH a cutie Miranda! I am also dreading going back to work in the fall. Boo! :(

Hi! Stopping in from SITS! Loved that you painted the onsie! I took month by month pics too, but didn't think to create the onsie. Lovin' that idea! He's too cute and happy!