Friday was a busy day. Joshua’s five shots pretty much knocked him out all morning so I finished packing, loaded up the car, blogged, and waited for Dan to get home. When he did get home, we got on the road by 2:00, our original departure time. Awesome.

By 2:05, we were in the Wendy’s parking lot trying to slow a rapidly accelerating high-speed meltdown. That took about 20 minutes. Dan got us some food and we waited for Joshua to settle down. Then we got moving.

So, we stopped at ANOTHER Wendy’s hoping to find a baby changing station. No dice. (Why do fast food restaurants NOT have baby changing tables?? I don’t get that…and what’s with NOT having one in the men’s room? This is a sexist practice…real men change diapers. Even the poopy ones.)

We found a gas station and I went inside to change Joshua’s diaper but I had to wait AT LEAST five minutes for the old lady in the handicapped stall to finish straightening her birds’ nest looking wig. I have no idea what she was doing in there but she took FOREVER. It sounded like she was rattling around about a million pill bottles.

Finally, we were back in the car. It was now about 2:45. We were about five miles from home. In 45 minutes. Awesome.

Then, I realized that Joshua had last eaten at about 1:30, which meant he was going to be hungry soon. Thus, I ventured on my first pumping in a moving vehicle adventure. That was, well, interesting…and difficult. 3/4 of the passenger’s back seat of a Camry is not conducive to pumping.

I’m pretty sure the curses were flying while I was trying to balance the two horn assemblies, my giant boobs, the pump motor, and the blanket I was using to shield myself from passersby riding higher up than we were. Luckily, Joshua had fallen asleep so I wasn’t also trying to soothe him while perfecting my circus act. Seriously, the first attempt at pumping in the car was HORRIBLE. I barely got two ounces from both boobs because I was so upset about not having the room to maneuver. I can’t STAND it when milk leaks out of the bottom of the horns and it was leaking all over the place. I was FRUSTRATED.

Thankfully, the next couple of pumping sessions were much better. I figured out a system for arranging all of the pieces I needed and using the rubber band method of hands-free(ish) pumping and I was able to be way more relaxed the next two times I pumped. I was pumping four to six ounces for the rest of the trip. I even fell asleep the second time I pumped.

Once we got on the road, Joshua’s behavior was very cyclical. It went something like this: 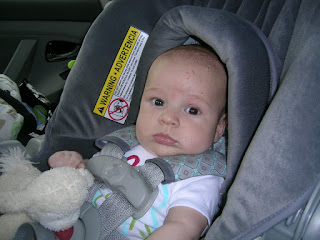 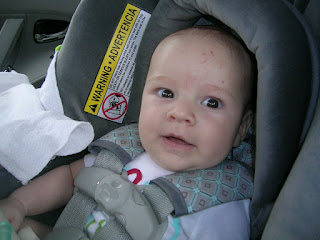 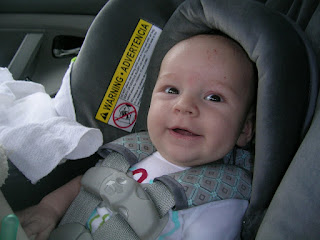 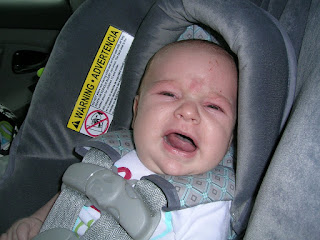 The next picture in this series would be of him sleeping, but once he fell asleep there was NO WAY IN HELL I was going to risk waking him up with a camera. Whew! Being locked in close quarters with a fussy baby is enough to make me want to break open container laws. He’d wake up kind of quiet and alert, then he’d get super happy and talkative, then he’d get hungry, so I’d feed him what I’d pumped, then he’d meltdown. There was probably some gas involved in his fussiness (even if Baby 411 says gas gets a bad rap…) and he was probably a little fussy from the shots, but we managed to get there in one piece.

I think we arrived at my aunt’s house at about 8:15 and everyone wanted to see Joshua. He had a meltdown of epic proportions that night after his bath. It actually started while he was in the tub and he NEVER cries while he’s in the tub. The combination of spending so much time in the car, being in a new place, seeing so many new people, and the shots that morning sent him into overdrive. I haven’t heard him scream like that since we left the hospital. The Miracle Blanket saved us, though. I swaddled him up and he started calming down instantly. That night he slept like a champ. Thank GOD!

Aww, glad you guys made it there all safe and sound!

I love the progressive shots of him in the car. I'm sure it was quite stressful in person, but it's pretty funny/cute one after another. Glad you made it in one piece.