Because I think the spawn in my belly is growing rather quickly, if you get my meaning. I took these pictures last night before bed and I swear that I am not this big when I wake up in the morning. By the time I eat dinner in the evenings, this is how the belly looks. I almost cannot take my own belly pic anymore without going into the bathroom and reflecting the picture out of the mirror. My belly (or my huge ass) got cut off in several of the pictures I took last night. See for yourself (14w6d): 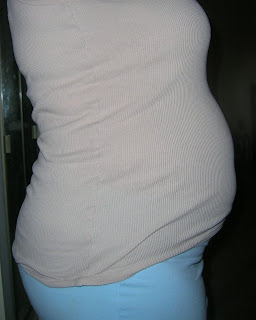 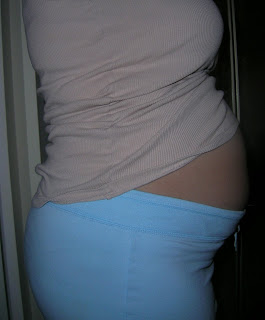 I woke up on Sunday with a head cold and the only thing I can safely take for it is Benadryl, which knocks me out. So, I napped on Sunday and went to bed early, dreading the return to work on Monday. I woke up Monday and felt like a nice big helping of poopsandwich, so I got a substitute and came home. I promptly went back to bed and woke up to Annie (my cute mutt) barking her head off at the pest control man.

Here’s the weird thing about Monday. The pest control guy saw DH’s copy of The Expectant Father (which he has yet to open) and my copy of Your Pregnancy Week by Week and he says “So, are y’all expecting, or expecting to expect?” And I respond “Yes, I’m pregnant and the baby is due in March.” Here’s a guy who comes into my house when I’m not here, a man to whom I am not married who has probably seen my dirty underwear in the laundry room before (gross, I know, but don’t pretend you’ve never had dirty underwear in a laundry room before), and now he’s asking me if I’m knocked up, which basically means that I have to confirm that DH and I have sex. He’s a relative stranger. A stranger who comes into my home every three months, but a stranger nonetheless. Weird.

So, that brings me to the next weird thing. With this rapidly expanding midsection of mine, REAL strangers are eventually going to be asking me when I’m due. Yes, yes, I know that I’ve probably said before in this very blog that I want someone to ask me who doesn’t already know, but that was at least two weeks ago. The idea of a stranger who happens to be buying apples asking me if I’m KTFU while I also happen to be buying apples is just creepy. And I swear the first stranger who lays his/her hand on my belly will get a swift punch to the throat.

Only two days left to vote! Boy or girl?

Your belly is so cute! I vote boy, there is no doubt in my mind. When is your big u/s?