Former high school English teacher and all around fan of books here who spent time this weekend watching the HBO Fahrenheit 451 movie so now you don’t have to and you’re welcome.

Also, FYI this is your spoiler alert. Do not read on unless you don’t care about having this movie ruined for you because I can’t not discuss the ridiculous things someone thought made for decent cinema. 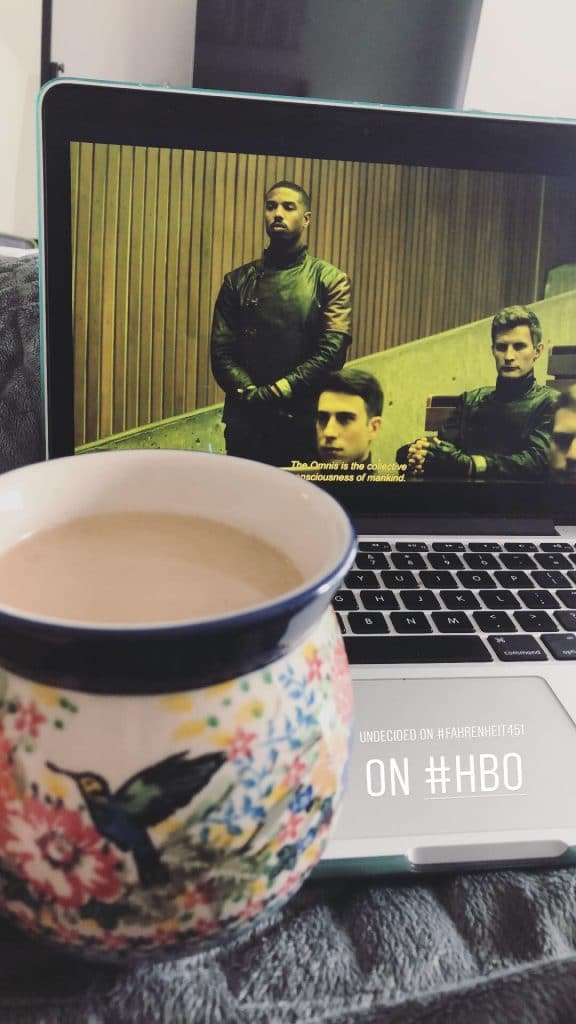 I should’ve known when I fell asleep half way through the movie last night that my feelings were not going to be high about this film, but I blamed the sleeping on the fact that it was nearly midnight and I’d had a Xanax and a half on Saturday. (Plus a Moscow Mule. Or two.)

I was wrong. It was the movie.

Okay, Miranda, but why was it so terrible? I’m so glad you asked…

As a novel, Fahrenheit 451 was always one of my favorites to teach. It was my first novel study of the year because our feeder middle school stole To Kill a Mockingbird from the 9th grade lit teachers, a challenging piece of literature and oh, man, so timely.

Kids and adults who hate reading and prefer to be spoon fed their information via electronic soundbites from the TVs and screens all around them and the little earpieces they never leave home without? Reality TV consuming our collective consciousness to the point we get so involved we’re practically part of the show? Government controlling our flow of information so that we know what they tell us to know?

Y’all, I had SUCH high hopes for this adaptation. I really, really wanted it to be good. It has never made sense to me that not a single good adaptation exists for a novel which seems SO EASY to be made into a screenplay.

Montag is a fireman, and the world he lives in is all he knows even though the people around him, like his wife, seem very unhappy and he, himself, is also not exactly happy. But he doesn’t know he’s not happy because he doesn’t know happy. He just knows…this.

He meets someone who is a real, human person with emotions and thoughts and feelings who sees the tiny little beautiful things in the world. She’s a catalyst for him to realize the kids, as they say, are not alright.

He begins asking questions and taking risks and finally decides that this world they’re living in is not a good one. They can do better. He WANTS to do better. He doesn’t exactly know how, but he knows he has to try so he does.

CITY-WIDE MANHUNT! WITH HELICOPTERS! Crazy people cheering from their living rooms for someone to die because that’s what they’ve been programmed to want!

An escape! Somebody dies anyway because the people need to believe the threat has been neutralized.

Satisfying resolution where you know things are going to end up better even though the book doesn’t explicitly say that because it doesn’t have to!

IT IS A PERFECT SCREENPLAY JUST NOT WRITTEN IN SCREENPLAY FORMAT PLEASE SOMEONE IN HOLLYWOOD GET IT RIGHT SOMEDAY.

This movie? So many wrong things, but mostly they ruined every character.

Book Montag didn’t love being a fireman. He didn’t even totally hate it. He just did it because it’s what he knew, even while feeling that something wasn’t quite right about it all.

Movie Montag (come on, Michael B. Jordan…) relished being a fireman. Firemen were celebrities in this midwest world. Montag loved every second of his notoriety until he just…magically didn’t anymore? His stash of random artifacts stolen from burn sites (a telephone dial?) made no sense in the context of this characterization.

Montag’s growth was rushed in ways that didn’t make sense. Beatty was some kind of caricature who knew too much about books and the world and, while that was also true in the novel, this Beatty seemed to…I don’t know. Hate that he knew things? Want the world to be different?

He was just not a good villain. Book Beatty wanted to die. Bradbury explicitly says something like “it was like he wanted to die.”

This Beatty? He wanted to write things on cigarette papers that made no sense and then burn them? And then he sort of seemed like maybe he wanted Montag to burn him alive at the end but then he also didn’t? It was so weird.

But the worst wrong character award goes to Clarisse.

In the novel, Clarisse is a wide-eyed teenager, different from her peers in every single conceivable way. She doesn’t even last too long in the context of the novel before she disappears and Montag learns she was hit by a car and died.

Montag’s wife is listed in the credits, so apparently someone played her, but she doesn’t exist in the movie.

Movie Clarisse is Montag’s love interest and also someone who trades information about people who have books and contraband so she can have her sentence reduced. (What was she sentenced for? What does burning people’s fingerprints really mean? They’re “eels”? They can’t…work? Buy things? The movie doesn’t explain it!)

So Clarisse is an eel, which is a term for…non-natives. Natives are, apparently, people who live on the “9” and keep tabs on society and love watching firemen burn things. (Eels read books and have contraband? Maybe “eel” is just a term for criminal of any sort in their world.)

If the movie got one thing right, it was the technology integration into the lives of people like Montag and Beatty, and wow the social media interaction felt like something right out of Black Mirror. But anyway, the movie was still very wrong.

Clarisse takes Montag to a community of people who have been memorizing books, which is similar to an event in the novel except Clarisse didn’t lead him there.

In the book, these people become the books. They memorize them. We’re going all the way back to oral tradition here, and they’ll start a new world by telling these stories and eventually writing them down again.

But this community is different. They’ve developed the most whackadoodle method of injecting books back into the human consciousness I’ve ever heard of in my life.

These people memorize books too, but they’ve also somehow managed to download the books from their brains into a strand of DNA that they injected into a bird that needs to get to Canada with a boy named Clifford (who has memorized 13,000 books) where they’ll put the DNA into other animals where it will then get back into humans because…humans eat animals?

But of course Beatty gets news that Montag is at this safe house before Montag is even at the safe house and he shows up and lights shit on fire.

Including Montag. But not before Montag can put a transponder on Book Bird and let it fly through a hole in the barn roof.

Bird DNA. Injected into other animals. To make people know about books again.

Ray Bradbury is rolling over in his grave. He may even be haunting the people who gave this screenplay a green light and they would deserve it.

They deserve every creepy second of Something Wicked that man can throw at them from beyond for the atrocity that was this insane interpretation of such a classic work.

Part of me wants to say the problem with the movie is they tried to cram it into 1 hour 40 minute run time and everything was just rushed with no explanation, but I’m not even sure another hour could’ve saved this film.

Speaking of Black Mirror again, when you have amazing everything coming out of 50-ish minute episodes of that series, there’s simply no excuse for this movie to have been so terrible.

If anything should’ve been set on fire it was this script.

I feel like they wanted to suggest that Beatty somehow had that omnis (shortened version of omnibus? maybe an acronym?" gene in him but just never got around to fitting it into the storyline. It feels like there was a lot they were trying to fit into this storyline and just couldn't.

AND WHERE WAS HIS WIFE!!! Come on! Her character practically predicted the Kardashians-style reality tv! Stories where families get into drama for no reason?

I think they should have gone the handmaids tale route and made a tv series, but just a one-season run.

Covid convalescing has given me time to finish Ser

She waited (impatiently) all. day. long. for enoug

Book #2 for the year complete! I love a series, an