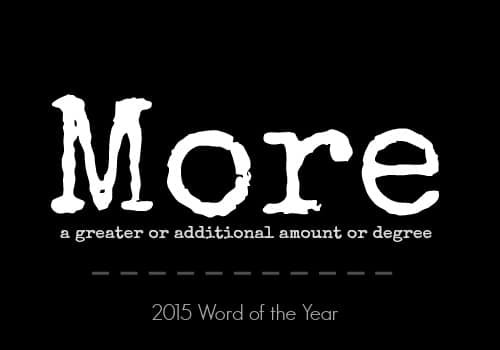 I realize we’re nearly two months done with 2015, so the timeliness of my word of the year is, well, not timely at all. But it’s still 2015, so I’m giving myself a wide berth to do what I want.

My word for the year is MORE. And it came to me while watching The Little Mermaid on repeat in the week between Christmas and New Years. Thankfully, I know I’m not the only person on the planet who’s ever been so inspired by a Disney movie she made a mantra about it, and if I am, oh well. I guess I am.

More is such a materialistic word. People want more money, more stuff, more more more. But that’s not what I’m really looking for with 2015 being about the acquisition of more.

Ariel says it herself.

What she wants isn’t more stuff to fill up her grotto. She wants…yeah, you know where this is going.

I want 2015 to be a year of living a more full life, one where I don’t take things and people for granted.

I know that I have a good life. That doesn’t mean I don’t have aspirations or areas that need work. Of course I do. But this life I have, the one Dan and I have created together, it’s good.

There is never enough time for those we love, so this isn’t necessarily about the quantity of time as much as it’s about the quality. I’m a big believer in the small moments mattering most. The little times where we just sit and listen to each other are the ones that get remembered when everything else starts to fade away because those are the memories that make an impression on our soul and not just our minds.  I never want to turn down a cuddle from the kids or an opportunity to spend time with someone I love. I don’t want to “in a minute” my life away. I want to give those I love the quality time they need.

I want 2015 to be a year of more dependability because mine sucks.

I remember a time in my life when I was a relatively dependable person. Then I stayed home and that all went straight out the window. It’s way too easy for me to say “oh, yes, I’ll do that…” and then forget. Two days (or two weeks!) later it still isn’t done. It was easier to manage commitments when I had a more finite amount of time to spare. If I only have an hour to make phone calls before returning to work, I have to make those phone calls, you know? Being at home all day has ruined my dependability because I can’t remember anything. I’ve made commitments and failed to follow through on them because…because I have. I hate that I don’t feel dependable.

So now I’m making notes, I have a planner, and eventually I’ll figure out why checking email on my phone has made everything more complicated instead of less.

I want 2015 to be a year of more writing and creativity because those things fill up my soul.

I’m not really sure what’s going on with this blog right now. I can’t tell if I’m outgrowing this space or if this desire for more is telling me to branch out and readjust what it is I’m doing here. Maybe the answer is just to get back here and get back to doing what I do.

Though "simpler" might be the better choice. It's, simply, I've been OVERWHELMED for the past year . . . hoping that less in my life might allow me to better appreciate the things that matter to me.