This paid post is brought to you by the new free Oral-B Disney Timer App as part of a Type-A Parent Community Sponsored Post.

When we first discovered that Joshua had sensory issues with an oral aversion component, brushing his teeth became about more than just good dental hygiene. It was a way to break through some of his sensory defensiveness by exposing him to different oral textures and sensations. Brushing his tongue and cheeks became ways we could help ease some of his anxieties. 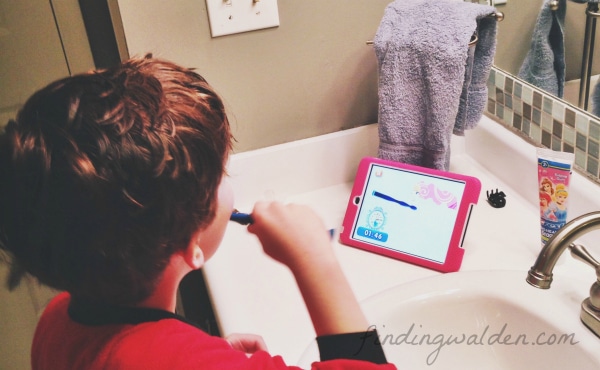 We didn’t have to do many very crazy things to get Joshua to brush his teeth regularly. For a long, long time, he refused to do it himself, though, always asking one of us to brush his teeth for him and refusing even to try doing it on his own.

And then one morning we were getting ready to go to therapy and he came out of the bathroom declaring that he had brushed his teeth. Unprompted, without help, and without making too big a mess all over the counter.

But then we ran into the problem of him only wanting to brush his teeth for 20 seconds before declaring that he was all finished.

In case you were curious, 20 seconds isn’t really long enough to brush. 120 seconds is way more like it.

The app helps kids brush for the recommended two minutes by turning brushing into a game.

As your child brushes, the app brushes, too, revealing a Disney or Marvel character as it goes. At the end of 2 minutes, teeth are clean and so is the screen!

Joshua loves declaring himself the winner when the timer is done.

He’s not wrong. Clean teeth while having fun is totally a win.

This paid post is brought to you by the new, free Oral-B Disney Timer App as part of a Type-A Parent Community Sponsored Post. Featuring sixteen of your favorite Disney and Marvel characters, use this app to seamlessly encourage your kids to brush longer. Collect a new digital sticker after each successful two minutes of brushing; track progress with stars and milestone badges on the Brushing Calendar. Longer, happier brushing for your little one is just a download away!

I have a 20 second brusher over here too! I can't wait to download the app!