His name was Cooper. He was kind of an asshole. 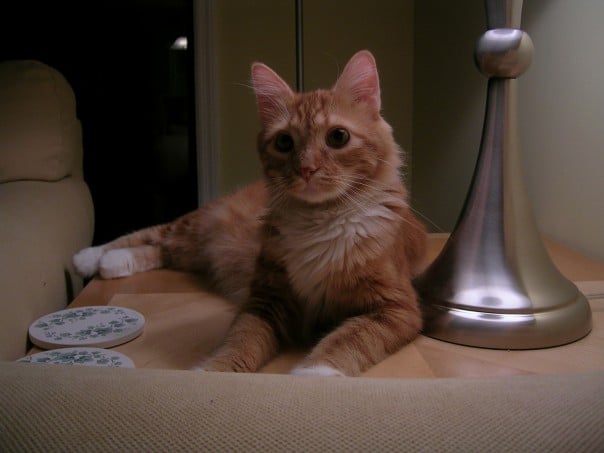 This is Cooper at around…8 months old? 10 months old? I don’t know. Under a year and way less fluffy and fat than he eventually got around to being.

So I was alone and also lonely. Then I got a new roommate. Then one night my roommate and I went out and we met Dan. And the story of that night is maybe the first story I should be telling, but I’m not telling it right now because it’s late and I’m tired.

But I met Dan and he and I started dating and Cooper kept being an asshole.

Cooper used to do this ridiculous thing where he’d get all high on his own energy and start running laps around my living room. One day he made the loop. The loop that went something like fly across the carpet, jump onto the couch, run as fast as you can across the couch, leap across the coffee table and onto the arm chair before cat-apaulting yourself into the floor and then do it all over again.

If you’ve spent any time with cats you know what I’m talking about here.

So Cooper was running the Kitty 500 in the living room one Friday night and then he broke his leg.

Yes. A cat. Who should always–supposedly–land on his feet. With a broken leg. Except I didn’t know it was broken. I thought he’d just landed funny.

The next morning I went to work at the bank and Dan volunteered to take the cat to the vet for me where they sedated and X-rayed the feline and probably did all sorts of undignified things.

Cats are nothing if not proud of themselves and their dignity.

I nearly fainted. $350. On the cat’s leg. That was, well, that was A LOT of noodle-and-sauce-only spaghetti.

“So, I know you’re kind of tight with money, so I’m going to go ahead and take care of this for you.”

Dan paid the bill. Even though he hated the cat. (The hating the cat thing is kind of important.)

And then I got another phone call. I could hear Cooper in the background meowing and quite obviously unhappy. He hadn’t even made that much noise the night before when he’d fallen off the chair and broken his leg in the first place.

We took Cooper to the emergency vet who put an actual cast on his leg–purple, which looked lovely against his orange fur. And then we went home to snuggle the poor, broken-legged kitty. Together.

I knew he was the one because of the way he treated a hurt animal. With compassion and concern.

(I later found out that I was allergic to the asshole who continued to pee everywhere, including the carpet and a couch, which is part of the reason he no longer resides here–the allergy part, not the peeing everywhere part–and went to live with an aunt who wasn’t allergic and also had no kids. Cooper was an asshole who hated kids. And I am allergic to cats.)

That is awesome. I hate cats too.