I married a serious car guy. (Better than an axe murderer?)

How does Dan love cars? I could count the ways.

But I won’t. Because this isn’t really about how much he loves cars. It’s about how I did something really freaking cool yesterday and there’s even video.

Just before Type A, I got an email asking me if I would be interested in heading out to a Bridgestone Drive and Learn event. No strings, no sharing unless I wanted to share. Just come and drive some cars. After going, I had to share. It was a cool experience usually only open to people like my husband because he works in the industry.

Dan has done events similar to this one before, both for work and for fun, and has always had a blast (See also: car aficionado.) so I thought “yeah, that sounds cool. Let’s do it.”

I’ve always let Dan handle the car stuff because I’m sort of on a need-to-know basis with all of it. I know what looks nice, what features I must have (no more sunroofs, tears be damned), how to put gas in them, and how to drive them.

It’s sort of dumb of me to rely on Dan to have all the car answers when I’m quite capable of having the answers myself.  What I learned yesterday is that there’s a lot that I don’t know that I probably should know, starting with the tires.

FYI: I did not at all expect to have quite so much fun learning about tires. Or driving a beautiful car. The BMW 328i. 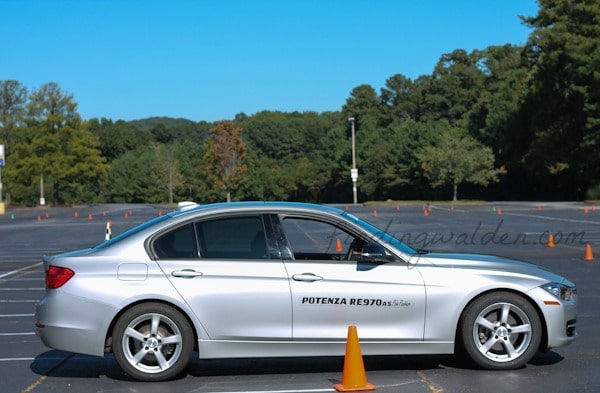 To me, tires have always been a necessary (expensive) evil. The car requires them to function. I require a car because of where we live. Ergo, slap some tires on the car and drive.

No. Nope. Not anymore.

Tires are one of the most important safety features on your car next to airbags, and after yesterday I completely understand this in a way I never did before, even after surviving a serious car crash in which my car flipped three times.

Tires are the ONLY part of your car in contact with the planet, and a lot goes into making sure they will properly grip the pavement to make sure you stay on the road. (Bridgestone has spent over $1 billion in research and development to design tires that will do this.) They also affect your car’s fuel efficiency. And I drive an SUV. Fuel efficiency is sort of important.

After learning about the differences between tires and how they’re made and what they can do, and realizing that all tires are not created equal, it was time to drive.

Bridgestone brought out 4 BMW 328i sedans each with a different set of tires for us to drive around a cone course to see for ourselves the way different tires react in similar situations and the effect tires have on safety, handling, and performance.

This is Pierre telling us “Hey. So, we’re going to drive not fast at all and you’re still going to think you might die. It’ll be fun! Promise!”

(No, that’s not really what Pierre said. Promise. Except for the “it’ll be fun!” part. He probably said that.)

Before driving the cars, Pierre (and Brian, not pictured) gave us a crash course in not crashing.

Many of us don’t drive how we should. Me included. We don’t look into our turns. We hold the steering wheel funny. We hit the gas when something dangerous happens when what we should really do is not go faster and practice defensive maneuvering instead.

Driving slowly or at the speed limit doesn’t mean things won’t go really wrong. I never got over 40 mph yesterday and I am now keenly aware of just how quickly things can, well, spin out of control. It’s amazing to me the difference in how the cars handled with different tires.

The first set of tires were the minimum performing tires recommended for the car. The control was terrible and I thought I might die both while driving and as a passenger. I haven’t gripped an armrest that tightly since I almost had Emma on the side of the interstate.

Handling improved with each of the remaining three sets of tires and by the fourth set, the “summer” tires, I really felt like I had control of the car.

There is nothing that will compare to you being able to drive this for yourself, but I have a video of my four drives to show you to sort of give you an idea. (P.S. The first round was the scariest driving experience of my life and I maybe cursed out loud and not just in my head.)

Kind of insane and so adrenaline rush-y. So much fun.

Now I think we should lower the speed limit through school zones from 30 mph to about 5 because really dangerous situations can happen so quickly.

The Bridgestone Drive and Learn event I attended isn’t open to the public. But they DO have a program that is.

Their Teens Drive Smart program is an intense half-day course in defensive driving designed to teach teens how to be safer behind the wheel. They also cover basic car care and emergency preparedness. It’s definitely worth it if you have a teen who is driving or just learning to drive. (Your car insurance might give you a discount, too, so that’s something to think about.)

Bridgestone invited me to attend their Drive and Learn event. They did not compensate me or ask me to write about this or their Teens Drive Smart program or share anywhere on social media. They just wanted to teach me a thing or two about tires. And now I’m taught.

Wow what an awesome experience. Sounds like you learned a lot. Thank you so much for sharing with us. Definitely a lot I didn't even think to think about.

Good tires are so important! I recently bought a used car, when I had my mechanic check it out pre purchase the first thing he said was "Great Tires". They were Bridgestone, of course

I didn't fully realize how important they are until yesterday! I've always balked at the price but not anymore!

Thanks for posting this! There is one this weekend at White Water.

I think K would get a lot out of the event. I'm not sure about price or even if it's too late to register for this weekend, but I'm not sure I can stress how good I think this program is for teenagers. I know there are longer, more in-depth driving programs like this one hosted at Road Atlanta (and probably other places as well) but for a crash course in defensive driving, this is great.