In an attempt to feel sort of normal and get life closer to the track again, I sat down at our hand-me-down dining room table last Monday morning with a cup of coffee and a good pen to write and mail out 4 more letters for the #31letters31weeks “campaign.” 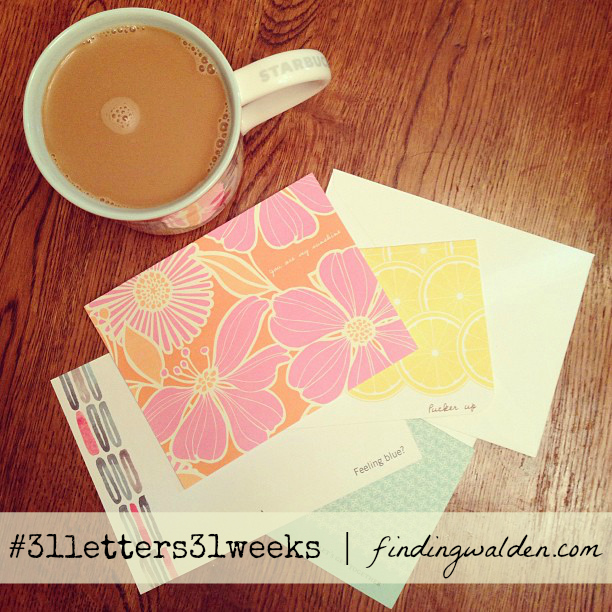 I almost hate calling this a campaign because it feels like I’m asking people to do something. I write my letters and post my photos and hope people will join in with me and start mailing real letters, but I can’t make anyone do that and it won’t crush my world if no one else does it.

I wanted to start this because I wanted to write more letters. I didn’t expect that others would really want to do this, too.

I mean, I hoped they would. But I didn’t bank on it.

And then I checked the mail this weekend to find a return letter from one of the recipients of last week’s love and realized that this thing has potential. This thing is bearing fruit. 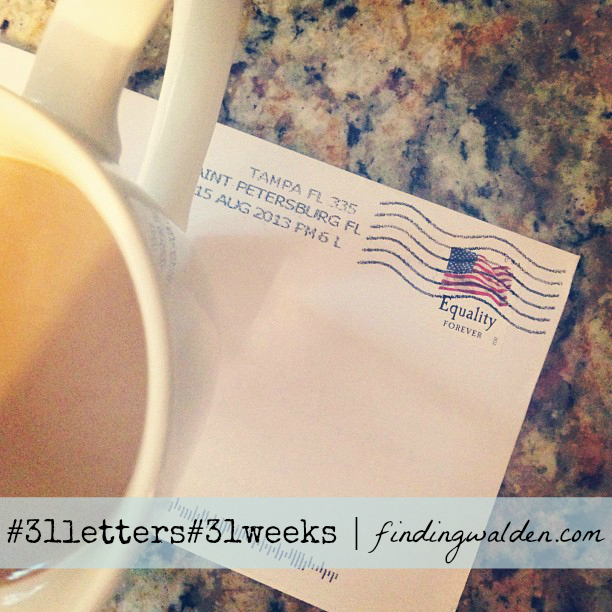 What my return letter in the mail tells me, and what many of you have said on Instagram/Facebook/Twitter, is that you ARE interested in doing this which quite frankly rocks my world. I love that so many of you want to join this letter-love-bombing thing I’m doing.

Except I don’t want it to just be a back and forth between you and me. I mean, if you want in on my list, email me (miranda@findingwalden.com). I’m happy to add people.

But what I really want is for this to be bigger than just me. Like a parent who wants more for her children than what she had/was/is. Make sense?

The trouble is I don’t exactly know how to go about accomplishing this because of privacy and the internet and people being weird.

(Not you. Or you. Maybe you. Probably not you, though.)

I would like to be able to connect people with others who want to send and receive letters. To act as a penpal conduit, if you will. But I’m kind of scared of 1) the potential scope of that and 2) the risks involved with giving out addresses to people we don’t exactly know. I mean, we know, but we don’t.

Here’s what I’ve come up with for the rules of #31letters31weeks.

I’m really excited that people want to do this because I think that at the very least it makes us practice our handwriting.

(I can neither confirm nor deny whether Dan and I may or may not have busted out pens and paper and compared our cursive penmanship. Recently.)

At the best #31letters31weeks lifts someone’s spirits when they need it and you may not even know it.

It’s also fun. And the world could certainly use some more of that.

Make your list. Send your letters. And let’s really start something.

Hi ! I am french and i would love to find an english speaking penpal, would you be interested?

[…] Want to know more about #31Letters31Weeks and how you can participate? Read the “guidelines” here. […]

I love this and I want to do it, too. :) And you know what? I have some addresses since I Was supposed to be doing that thing that was everywhere in January about surprising people with letters. So I'll start soon. I promise.